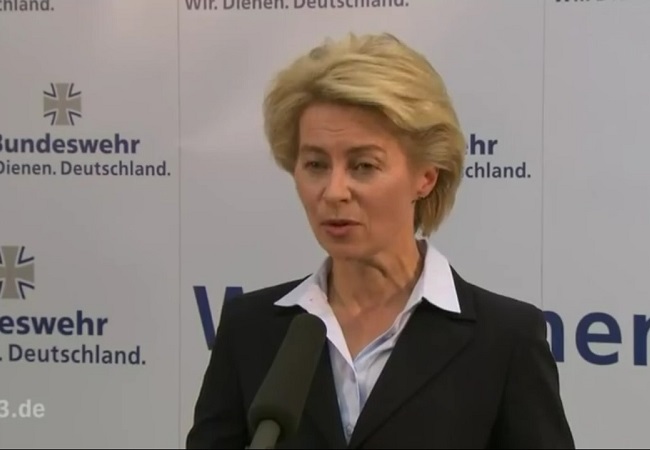 The call for reconciliation comes after a series of deadly terror attacks carried out by the Taliban in Afghanistan. In late January, the Taliban suicide bombers detonated an ambulance packed with explosives into a crowded Kabul street, killing more than 100 people.

The German olive branch also comes at a time when the Trump administration is intensifying the military pressure on the Taliban. Last month, U.S. Air Force B-52 Stratofortress dropped a ‘record number’ of bombs on Taliban bases. The U.S. Forces carried out a 96-hour air strikes hitting terrorist training facilities and Taliban revenue sources such as drug trafficking.

“Von der Leyen called for reconciliation with the Taliban,” reported the Berlin-based newspaper Tagesspiegel on Monday:

Defense Minister Ursula von der Leyen landed in Kabul on a visit to Afghanistan and urged the Afghan government to carry out reforms and [seek] reconciliation with the radical Islamic Taliban. “Where I want to see more progress, would be in political process and that is the most decisive of all,” the Minister said in Kabul on Monday.

The people in the country have to feel that the government is implementing reforms. The upcoming parliamentary elections in spring are important in this context. The minister lauded Afghan President Ashraf Ghani’s steps to offer peace talk to the Taliban that are “willing to renounce violence and respect the constitution.” [translation by the author]

The German Defense Minister’s statement was fully in line with the Merkel government’s long-standing policy towards the Taliban. Last year, the German Foreign Minister Sigmar Gabriel revealed his involvement in negotiations with the Afghanistan-based Islamist terror group. “We are involved in finding a political solution between the hostile camps,” the outgoing Foreign Minister Gabriel told German reporters last summer.

After 17 years and $1 trillion spent, some 10,000 U.S. troops and 1,000 German Bundeswehr soldiers are left in Afghanistan, many of them involved in training an Afghan National Army.

While the Taliban has been regrouping and rearming in the countryside, the Afghan National Army has been plagued with desertions, corruption and lack of combat morale—leaving basic the task of maintaining security to the U.S. and NATO forces.

In light of these catastrophic failures, Germany’s right-wing AfD has been opposed to Merkel government’s decision to extend the Bundeswehr’s mission to Afghanistan. Despite AfD’s objections Germany will be raising the number of troops in Afghanistan from 980 to 1,300 during the course of the year.

“And now… Defense Minister you again want to send German soldiers on a rescue mission to Afghanistan, while Afghan refugees drink coffee in [Berlin’s posh] Ku’Damm square instead of helping to rebuild their country.” AfD leader Alexander Gauland said during a parliamentary debate last year.

With the Afghan men are leaving their country in droves, seeking better lives in European welfare states, its left to the men and women of the U.S. and NATO allies to defend Afghanistan.

Video: US drops record number of bombs on Taliban in Afghanistan

Apparently there IS a sucker born every minute.

German industry want another Obama no-paper Iran type deal. Davos backroom negotiations using the EU’s communist foreign minister. Check her wiki page. There is precedent for this. Baroness Catherine Ashton, the EU’s former foriegn minster worked the Iran deal in a one on one sit down with Iran’s FM Zariff.

The rest is herstory.

Cognitive dissonance, and a life sacrificed in vain, are first-order forcings of post-traumatic stress disorder. Or, maybe, this is an opening to address catastrophic anthropogenic immigration reform.

Maybe it sounds better in German. Because it sounds suicidal in English.

She just told the Taliban that their terror attacks are working. Germany can expect much more carnage thanks to her.

And if I fall asleep with my theory that diplomacy has been the root cause of War. Waves to April Gillespie…

Lol. Falls in line with my theory, not falls asleep

“While the Taliban has been regrouping and rearming in the countryside, the Afghan National Army has been plagued with desertions, corruption and lack of combat morale—leaving basic the task of maintaining security to the U.S. and NATO forces.”

Apparently, everything goes to Afghanistan to die.

Will the Taliban respect her in the morning?

Afghanistan is a tribal landscape incapable of being a “nation”. Quit attempting to build it. Pit tribe against tribe and leave or just nuke a few areas to permanently remind them what will really happen the next time around. If there ever was a time to have nuked something, Tora Bora was the right place at the right time.

“We are involved in finding a political solution between the hostile camps,” the outgoing Foreign Minister Gabriel told German reporters last summer.

A political solution to a problem centered around a fanatical religious cult.

Gee Wally, Germans have their own dumb rocks !

It’s in the air:
https://www.zerohedge.com/news/2018-03-27/will-germany-still-belong-germans-near-future

The ardent claim of Muslims, which they ardently believe, is that Mo’s book is the perfect book and being perfect can’t be improved. Jihad is one of the Qur’an commands – fight in the way of Allah until the whole world proclaims Islam – and it has been consistently followed for 1400 years. They ain’t stopping now. Germany, the UK, and France are within their grasp, and a good deal of their success can be placed on the betrayals of European leaders from the 1950s until today.

In the next 50 years (100 years if lucky), two additional Muslim nations will be nuclear with full ICBM capabilities, Britain and France.

I would add Belgium and The Netherlands to that list. Once France, Germany, and the UK fall (I see the mass jihad actions starting within 10 years) the rest of Europe follows. Tom Kratman’s novel is coming alive.

Kabul = The City of Cain

The legend is that after killing his brother, Cain went east and founded Kabul.

Gives a bit of perspective, maybe.

I’ve always had a problem with this part of the Bible. If God created Adam and Eve, where did the people living in the Land of Nod come from?

Who says there were any people living there?

you cannot “coexist” with people who want to kill you.

easy.. they are above ground and you are 6 feet under.

Tell me again why the U.S. still has 34,805 troops stationed in Germany.

Remember the purpose of NATO—Keep the Russians out, the Americans in and the Germans down. All our military focus on Germany can’t stop suicidal stupid.

The female leaders in Europe, and in Germany in particular, do not set a good example of female leadership or exactly serve as paragons of competence and wisdom.

Is there a male leader in Europe who is wise and competent? The entire continent is full of eunuchs.

The only one I can think of is Nigel Farage.

Daniel Hannan. Much smarter than Farage. And a better man.

I am afraid you might be right about female leadership, and not just today’s Germany .. or Great Britain. Visited the Normandy beaches last spring, and was overwhelmed. We stood at the top of Point du Hoc and looked down 100 ft to a narrow strip of beach. There was no doubt in my mind that women would have looked at the site and said, this is not reasonable. The Rangers sent to attack those cliffs and take out the German machine gun bunker on top, though, tried to race each other to the top. They took horrible losses, but they persevered and took out the Germans. Even football had not demonstrated the real difference in view point as Point du Hoc did.

I wonder if there’s some international plan to confiscate and dispose of Britain and France’s nukes after they become part of the Caliphate. My guess is, probably not.

I suspect that the intent of the British and French governments is to offer their nuclear strategic forces to Islam as Jizya. I don’t know if there is an official plan, and given the fact that President Trump is still fighting with the Deep State and the Democrats over control of the US government, I rather doubt it.

Not that it has not been considered. Well over a decade ago I put out a daily email newsletter on military and political affairs. Every so often I would do what I referred to as a Special Project issue. One of them involved how to deal with France’s Force de Frappe in such an event. It was possible. It was untidy. It would be hard on the French, primarily because of the need to make sure that the force could not be reconstituted; but then again when France falls to the Caliphate they are going to be beaucoup scrod anyway.

There was no similar consideration of Britain, because back then the concept of Britain yielding to Islam was as unthinkable as them fighting back is today.

It was possible. It was untidy. It would be hard on the French …

Much like the Royal Navy’s attack on the French fleet at Mers el-Kébir.

Some ideas are just too good to retire.

Too bad this woman wasn’t German defense minister during WWII. The war wouldn’t have lasted a week.

After WW2 there isn’t a German that can be nationalist or masculine , they have a collective guilt that will last a thousand years… and they, and we, don’t have a thousand years

Look up Ludwig Wilhelm Erhard, the man who transformed post-war Germany (which go less than half of what Britain got in Marshall funds) into an economic powerhouse by use of market economics.

The stupid is growing stronger by the minute.

With all these single “down” marks, I sense a liberal bed wetter in our midst.

IF Taliban saw Germany as strong then Germany might be able to at least negotiate some sort of hudna.

But as it is, Germany would probably have to pay a huge cash price just to buy its troops safe-passage out of the country.

Why would anyone in Germany perceive their country as having anything to offer Taliban (other than cash or weapons) that Taliban would want enough to give something up for?

Germans are getting everything they voted for, good and hard.

In Egypt, “reconciliation” and “healing community sentiments” means that after Muslims have kidnapped and gang raped some Coptic girls the Copts must agree to shut up about the whole thing and stop their street protests. I have no doubt that what ISIS means by “reconciliation” is similarly Orwellian.

Really not much difference between ISIS, the Taliban, and Al Qaeda in terms of support for violent jihad.

Yet, somehow, the Taliban should be treated as a legitimate group to lead a nation state?

Maybe she just wants, ” Peace in our time.” After all, look how well that worked out for Neville Chamberlain.