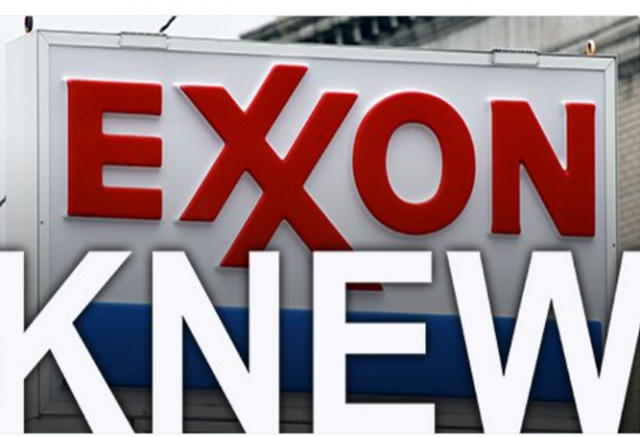 The last time we reported on ExxonMobil, the Big Oil giant was counter-suing municipalities that had sued iy for suppressing climate change impact data.

At the time, the company noted that though these same cities and counties claim that they are seriously threatened by floods and other environmental problems because of “climate change”, they clearly failed to disclose these dire concerns to potential bond investors.

This week, the cities’ case against several petroleum firms was in  court.  Wisely, the presiding judge decided to get a grounding in climate science before continuing to hear the matter.

In much the same way the judge does in complex technology cases, Alsup has asked the parties for a tutorial. Alsup held a similar session on the laser science underpinning Waymo’s autonomous vehicle trade secret lawsuit against Uber Technologies Inc. and even asked the lawyers handling the litigation challenging the Trump administration’s rollback of the Deferred Action on Childhood Arrivals to bring him up to speed on the program.

Chevron’s lawyers took the lead in the tutorial. In the global warming case, Alsup has asked both sides to “trace the history of scientific study of climate change” and fill him in on “the best science now available.”

The most shocking aspect of the tutorials was the fact that the Big Oil accepted the findings touted most often by climate alarmist themselves.

Chevron agreed with the latest scientific assessment from the Intergovernmental Panel on Climate Change’s (IPCC), which was released in 2013 and 2014, the oil company’s lawyer said.

California cities, environmentalists and some scientists argued Chevron’s use of the IPCC’s latest assessment was misleading since it was outdated. Effectively, those seeking to punish oil companies are throwing aside the oft touted “consensus” on climate science.

…That ruffled the feathers of some scientists and environmentalists, who immediately went on the offensive against Chevron, accusing the company of using the IPCC to discredit climate policies.

Perhaps the best bit of work during the tutorial was using the plaintiffs’ own words to make the oil firms’ case:

E.g., ““The City is unable to predict whether sea-level rise or other impacts of climate change or flooding from a major storm will occur, when they may occur, and if any such events occur, whether they will have a material adverse effect on the business operations or financial condition of the City and the local economy.” Citing “City & Cty. of S.F. Tax-Exempt General Obligation Bonds, Official Statement (Jan. 2017)” and a similar statement by the City of Oakland.

The judge is expected to use the tutorial to determine if the case has merit to continue.

Chevron, Exxon and other defendants in the case are pinning their hopes on persuading Alsup that the claims by San Francisco and Oakland have no merit. On Tuesday, they filed a motion to dismiss the lawsuit. The judge is expected to hear that motion at a hearing next month, after digesting Wednesday’s tutorial.

WWKCD? (What would kid charlemagne do)

As noted above – Chevron, Exxon and other defendants in the case are pinning their hopes on persuading Alsup that the claims by San Francisco and Oakland have no merit. On Tuesday, they filed a motion to dismiss the lawsuit. The judge is expected to hear that motion at a hearing next month, after digesting Wednesday’s tutorial.

Yes – I tried to point out to Anthony that nothing had actually been dismissed yet. However, there was some promising bench language from the job, who looked at the documents which the plaintiffs said proved the element of conspiracy, and then said that those documents showed nothing of the kind.

Tom However, there was some promising bench language from the job, who looked at the documents which the plaintiffs said proved the element of conspiracy, and then said that those documents showed nothing of the kind.

FWIW your statement is the most accurate on that subject. That being said, its a long way from a negative comment from the judge to outright dismissal.

This could be a delicious turn of events.
My thanks to Joe-
Dallas for the clarification.

B) the hearing for any motion to dismiss has not been scheduled at this point, but is at least a month away
C) It is unlikely to be dismissed. The judge did ask for a tutorial which would normally be considered a good thing, However, this same judge also fubared the DACA case. This same judge, even though a senior judge (not full time) somehow has gotten a lot of high profile cases in the northern district post senior status when cases are assigned randomly. Similar to the way Rhienhart has gotten onto a lot of 3 judge panels in high profile cases at CA9.
D) Even in the unlikely event, this judge grants a dismissal or even a partial dismissal, it is appealable to CA9 which will almost certainly reinstate any and all dismissals at the district court level.

From 2008 -bishophill: Caspar and the Jesus Paper. Some of the first real connect-the-rValue-dots in one blog post.

The left is in full overdrive right now.

They’ve created an army of narcissistic useful idiots, and now they’re marching them.

McConnell And Chao: As Corrupt As The Clintons:

It has been my understanding that you can only bring a suit against another if you can show how you were damaged. Is this not true in this case? What the Climate Nazis are doing is to try and prove future damage when they cannot. Additionally, how can one oil company or even multiple oil companies be found found guilty of causing climate change when you have countries burning enormous amounts of coal and other fossil fuels as many other oil companies providing oil and natural gas to be burned?
>
As a research chemist with 35+ years of experience, I find the arguments by the global warming crowd to be akin to fantasy. However, I also remember the lawsuit against Dow Corning for breast implants causing numerous detrimental health effects. Dow Corning was nearly driven out of business by the guilty findings from the court based upon “the best science of the day” which was later debunked and determined to be bogus hysteria drummed up by paid experts. I truly hope that debacle is not repeated here for, if it is, then America’s modern day Lysenkoism will be given a new lease on life with untold consequences.

I understand that oil companies refine/manufacture gasoline. But they don’t make the average American consumer purchase an SUV that gets 13 mpg. That’s a personal choice. How again, can a lawsuit against big, scary oil companies proceed, exactly?