This is a a far cry from Kim Jong Un’s ICBM-launching shenanigans a few months ago. 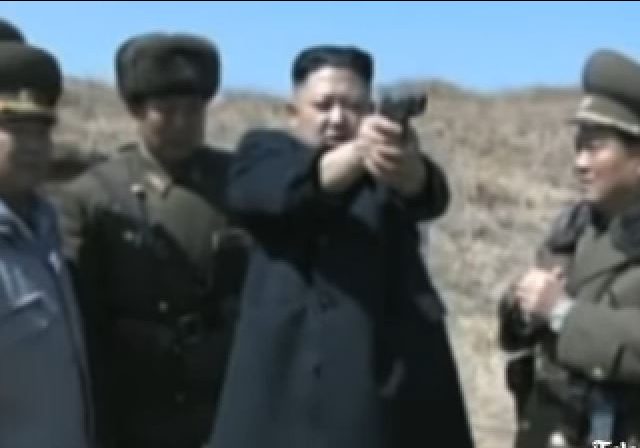 Legal Insurrection readers will recall our report that it was suspected that North Korea’s Supreme Leader traveled to Beijing, China for significant, policy-oriented meetings
The news is confirmed. I believe that Kim Jong Un was being treated to lectures of China’s version of the “New World Order”. My theory appears to be correct, as a Reuters report indicates that the rogue regime is promising to denuclearize.

North Korean leader Kim Jong Un has pledged to denuclearize and meet US officials, China said on Wednesday after an historic meeting with President Xi Jinping, who promised China would uphold its friendship with its isolated neighbor.

After two days of speculation, China and North Korea both confirmed that Kim had visited Beijing and met Xi during what China’s Foreign Ministry called an unofficial visit to China from Sunday to Wednesday.

The China visit was Kim’s first known trip outside North Korea since he assumed power in 2011 and is believed by analysts to serve as preparation for upcoming summits with South Korea and the United States.

Chinese news is touting this development, though there doesn’t seem to be a timetable for this process.

The official New China News Agency says Kim told Chinese leader Xi Jinping: “If South Korea and the United States respond with goodwill to our efforts, and create an atmosphere of peace and stability, and take phased, synchronized measures to achieve peace, the issue of the denuclearization of the peninsula can reach resolution.”

“The nuclear issue is the only obstacle” to good relations between China and North Korea, says Lu Chao, a North Korea expert at the Liaoning Academy of Social Sciences in the northeastern Chinese city of Shenyang, and without it being addressed, China would not invite Kim for a visit.

Harry J. Kazianis, the director of defense studies at the Center for the National Interest, thinks that the exchange between Kim and Xi is to help address the possibilities of a future meeting with President Donald Trump. He offers an interpretation of what phased, synchronized measures may mean.

…Basically, what would Kim Jong Un demand from the United States and South Korea for giving up his nuclear weapons?

Would the North demand, for example, the ending of the U.S.-South Korea alliance and the removal of all U.S. forces from the Korean Peninsula? Would Kim demand America also denuclearize, as he has demanded in the past? An absurd demand that like would show Kim had no intention of negotiating seriously.

And let’s go further afield and think through what terms North Korea would seek in the denuclearization process. Would Pyongyang allow international inspectors full access to all parts of the country? Would the North allow the total destruction of all aspects of its nuclear program, including all nuclear reactors? What happens to North Korea’s missile program or chemical and biological weapons programs?

Being optimistic, I will note that Kim got an important reality check and at least used the term “denuclearize”. This is a far cry from his ICBM-launching shenanigans a few months ago.

But according to some reports, North Korea probably didn’t mean with China out of the goodness of their heart. According to The Telegraph, China had dramatically reduced petrol, steel, and car exports to North Korea over the last five months.

The leaders of North and South Korea are to meet on April 27 for the first time in more than a decade, the two countries announced on Thursday after preliminary talks between senior officials.

An analysis of Chinese customs data from Aberdeen Standard Investments has revealed that China’s exports of refined petroleum to North Korea have collapsed in the last five months, to as little as 3.7 per cent on the previous year.

Other products have also been hit. North Korean steel imports from China have fallen dramatically, along with car imports. Economists believe that the data may explain the recent dramatic shifts in North Korean policy.

The North Korean leader, Kim Jong-un provoked widespread international attention this week with a trip to meet Chinese President Xi Jinping in Beijing. This followed the country’s attendance at the Winter Olympics, and was another highly unusual step for closed-off state, known for its efforts to proliferate nuclear weapons an oppressive regime.

Alex Wolf, a senior economist at Aberdeen Standard Investments told The Daily Telegraph that the data suggested a blocking of the flow of exports into North Korea from China was a case of “using pressure to bring Kim closer to the [Chinese political] fold”.

If true, thank you President Trump!
Of course the media will insist it was the Chinese and SK
But everyone really knows it was the Donald !

This is the standard nuclearization rope-a-dope as developed by AQ Khan of Pakistan. Next there will be a ‘humanitarian aid’ package in exchange for assurances, which will be followed in a few years by another FU nuclear test and public resumption of the program. This is the third or fourth time they’ve pulled this crap.

This is certainly farther than previous administrations, of either party, got with North Korea. It remains to be seen whether China, and North Korea, will do what they say they will. But this is the first really positive sign in decades.

Not possible. Certain people here have told us Trump is a buffoon, an orange haired cheeto, a collectivist. It’s just not possible he could succeed where both Bushes failed.

Nothing to forget. With the left, a nuclear NK is a feature not a bug.

Both you and Leslie are T-rump worshipers. The China thing is too early to read. We’ll see…

And your Great Goad Cheeto is a buffoon. He makes himself a buffoon every week.

He’s also a New York Progressive, down in the bone.
https://legalinsurrection.com/focus/tips/comment-page-159/#comment-833002

But we can back into some hope that T-rump flopped his way into a good outcome. It won’t happen any other way while he’s POTUS.

Funny how deranged cultists think everyone else is into cult worship.

Flawed character does this. You’re deeply flawed. And always on the side of the progs.

Deranged cultists don’t think about everybody else
being in a cult, Butt-hurt Barri.

Like you, they deny, deny, and attack anyone who identifies their obsession.

Hey peepee, you’re a deranged cultist if there ever was one.

Trump derangement syndrome. A cult of nevertrumpers, a small cult, but a cult nonetheless.

While we are on the subject, it is reported that the U.S. Post Office will lose $1.50 on average for each package it delivers for Amazon. That amounts to Billions of Dollars. The Failing N.Y. Times reports that “the size of the company’s lobbying staff has ballooned,” and that…
7:45 AM – Mar 31, 2018

…does not include the Fake Washington Post, which is used as a “lobbyist” and should so REGISTER. If the P.O. “increased its parcel rates, Amazon’s shipping costs would rise by $2.6 Billion.” This Post Office scam must stop. Amazon must pay real costs (and taxes) now!
7:52 AM – Mar 31, 2018

See, Butt-hurt Barri, your god is a buffoon. Another set of risible lies, Weird Capitalization, and splenetic attack from out of nowhere.

As an aside, lobbying has exploded since Duh Donald took over. The natural and expected result of fascist economics and central planning.

I notice you always come out in support of the progs.

I have no clue what it costs the post office to ship amazon packages. I doubt you do either. I damn sure would not believe what the post office says. Or your favorite go to, progs.

How many more lies will you spread in service to your cult?

Everything Duh Donald says here is an out-and-lie, and you are too stupid and ill-informed to know them for what they are.

AND, of course, you won’t believe any data and facts, because…suck T-rump.

Others of us are NOT either stupid OR ill-informed, you lying old nutter.

OH, AND since LI supports Amazon (and vise-versa), AND uses the WaPo as a primary source, I fully expect you to label the Prof. and other authors here “Progs”.

But you won’t because in addition to being a lying nutter, you’re a craven coward.

No one else ever wanted to.

The deep state wants problems that justify their existence. They do not want problems solved.

So true. My best friend is a dentist. I always tease him about dentists aren’t too bright because they are always telling patients to floss, get their teeth cleaned, use a water pick… all to put themselves out of business.

In government we need more dentists and fewer lawyers.

I question the whole thing. Any chance China is working with North Korean to provoke the US? I sure hope our intel is getting their act together and focusing on our security instead of chasing Russia,Russia, Russia.

Unlikely. China has far too much to lose by a US-DPRK conflict. The refugees streaming into China ALONE would be a PR nightmare.

They’re not going to risk it by meeting with a tin-pot despot of a 3rd world country solely for the purposes of trying to goad President Trump.

Nothing much here. It doesn’t look like anything more than the standard song & dance from the Norks. The only important development would be if the Chinese tell them that the free ride is over and it’s time to stop clowning around or else … and I see no likely scenario in which either would announce such a thing publicly.

Nobody – N O B O D Y – gives up that kind of power willingly. IF (big if) he ever had nukes of his own, Kim would not give them up. EVER.

If NK is a surrogate of CIA or KGB (I risk being redundant) that certainly muddies things up a bit – the (alleged) Nork nukes weren’t his to begin with.

Again, IF he has managed to get nukes, he will not give them up, despite what he says. There his ticket to the big time.

UNLESS he’s been offered another ticket to the big time, which I suppose is possible. But if that is the case, he’s planning on keeping the (alleged) nukes anyway, nudge nudge, wink wink.

IF he even has any.

This has nothing to do with DPRK. This is Chine displaying its panda mask in order to get economic concessions from the US. “See, we are helping to control the NK crackpot”. At the same time there is a veiled indication that China will still support Kim in his quest for nuclear arms.

Ignore this and keep the heat on both the DPRK and China.