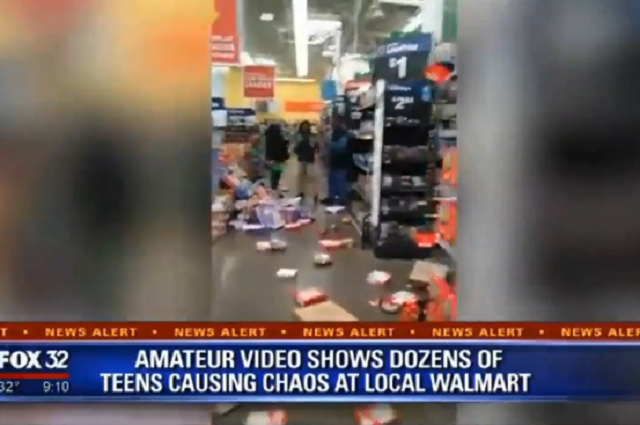 Nothing says, “I’m so superior to you that I know what’s best for you” quite like a bunch of SJW teen delinquents using the regressive anti-Second Amendment “walk-out” day as an excuse to display their true character by trashing a local Walmart.

The values we are meant to adopt with meek acquiescence apparently include looting, theft, and vandalism in the name of the gun-grabbing “Greater Good.”

Chicago police are trying to identify the dozens of students from Simeon Career Academy who they say took part in a vandalism spree while they were supposed to be protesting guns.

Shoppers and store employees were stunned by the destruction Wednesday morning at the Walmart in Chatham Market on the South Side.

Chicago police say it started when students at neighboring Simeon Career Academy were allowed to leave the school for 17 minutes to take part in the nationwide walkout to protest guns.

Police say between 40 and 60 of those students crossed the street and trashed parts of the store, knocking over product displays, yanking items off shelves, breaking packages and stealing small items like chips and candy.

BUT WHY?? Chicago students who walked out of school on Wednesday to demand action on gun violence ended up going to a nearby Walmart and trashing the place. https://t.co/Z6ZhGPZYMo pic.twitter.com/kSW1QOU1jk

Oddly, these teens do not inspire in me a desire to relinquish my Second Amendment rights.