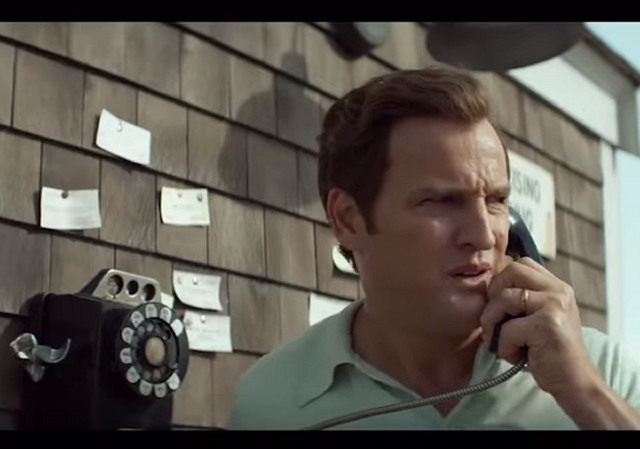 We ran a post about the film recently. See the trailer and read a review here.

This poster for the film leaves little to the imagination:

I haven't been this excited for a screen gem since I discovered Boston Blackie on YouTube. #Chappaquiddick pic.twitter.com/Hcmeu2hrNV

A discussion with the film’s director, John Curran, and actor Jason Clarke, who stars as Mr. Kennedy, will follow the opening night screening.

“We’re really excited,” MVFF artistic director Brian Ditchfield told the Gazette Tuesday. “It’s rare that you find a great dramatic film that also has local resonance, and so we thought it was the perfect film to open the festival.”

He added that the film festival was excited to bring Mr. Curran and Mr. Clarke to the Island. Mr. Clarke, an Australian actor who also starred in Zero Dark Thirty, among other films, “was fabulous in [Chappaquiddick],” Mr. Ditchfield said…

The new film looks at the car crash and the aftermath that unfolded, largely on the Vineyard, which included a media firestorm and the Kennedy family dealing with what they saw as a public relations nightmare for Mr. Kennedy.

In another article at the Vineyard Gazette, Ms. Brown describes an experience shared by the filmmaker and the actor who portrays Ted Kennedy:

A few years ago director John Curran and actor Jason Clarke made a late night trip to the Dike Bridge on Chappaquiddick. The bridge has been rebuilt, but the dirt road, Poucha Pond, and rural landscape haven’t changed much in 49 years since Sen. Ted Kennedy drove his car off the bridge in a late night accident that killed a young woman, Mary Jo Kopechne.

“We went out one night late to the bridge and looked around, 10:30, 11 o’clock, and just stood on it,” Mr. Curran said in a phone interview this week. “The thing that struck both of us was how incredibly dark it is. There’s no ambient light out there, and you really could imagine late at night, a car going into a pond and being disoriented. What really struck us was how disorienting and scary that must have been.”

“And you know, feeling the sort of ghosts of the story out there.”

The description of the film on the Martha’s Vineyard Film Festival website is very telling:

We believe we know what happened that night. We’ve read the newspaper articles, watched the t.v. reports, or, as most Island stories travel, heard it through the grapevine. Jason Clarke (Mudbound, Zero Dark Thirty) masterfully takes on the role of Senator Ted Kennedy in the days surrounding the infamous car crash in the summer of 1969.

The festival runs from March 15 to 17, if you’re inclined to visit.

I wonder how much of the movie’s budget was spent on whitewash?

Kennedy had about as much courage and devotion to duty as the school guard(s) in Fla.

That will go over like a turd in the punch bowl in that liberal enclave.
I’d love to see the look on the faces of the fly-in community. The locals already knew the truth and have been thinking this for a few decades.

“…There’s no ambient light out there, and you really could imagine late at night, a car going into a pond and being disoriented. What really struck us was how disorienting and scary that must have been.”

Wow the Senator must have been really scared and disoriented, poor Teddy.
Mary Jo was unavailable to share her feelings.

Exactly what I was thinking too. This will be an attempt to whitewash the incident and rehabilitate Kennedy. Next will be a biopic on how it was actually cool and liberating for JFK to pimp out his teenage intern to a big campaign contributor in the Whitehouse pool (and watch). Then there will be a flick telling us how morally superior the Kennedy’s were when they lobotomized their daughter because she enjoyed the company of boys a bit to much.

The fact that the left continues to worship this family of moral degenerates speaks volumes.

Watch the 2 minute trailer on youtube. If this represents the rest of the movie it isn’t very flattering to the Kennedy’s. in fact it looks like a Dinesh D’Souza account of the incident and cover up.
We can only hope.

I hope it is a well-deserved comeuppance for the Kennedy clan.

This movie could go one of two ways. Either it will portray Ted Kennedy as a poor, scared, confused man who accidentally drove off the bridge, then innocently made a series of mistakes which resulted in the death of Mary Jo Kopechne and was forced to participate in a cover-up orchestrated by an evil older generation of Kennedy’s to protect the family or it will portray Ted as a man who was more concerned with himself and his family than in accepting responsibility for his actions, or lack thereof. I make no prediction of which way the film went. But, which version is most likely?

It’s not an either/or. Royal families protect the heirs to the throne. I was in college at the time, and I remember the coverage as somewhat less than flattering to the Kennedys. It ended Ted’s presidential aspirations.

Everyone knew what the real story or close to it was. That did not stop the local law enforcement and government officials from muting the issue. Progressive politics needed progressive politicians and Teddy was a proven fellow traveler. The voters were in on the take by keeping Teddy on.

“It was just a friendly reunion with some of the young women who worked on the RFK campaign. And there only a small amount of alcohol consumed, just a few cocktails before dinner. After that, I was tired from long day of sailing so I decided to go back to my hotel. Mary Jo asked for a ride. On the way to ferry, which was the only way back to the hotel, I mistakenly took a wrong turn off the paved road and onto a dirt road going away from the ferry and to a secluded beach. Then, suddenly, the cow jump over the moon and the cheese ran away with the spoon. So, you see, it was all just an unfortunate accident.”

Anyone see this movie?

But his “good works” in the Senate were his penance for this momentary mistake and lapse of judgment.

Colluding with the Russians and waitress sandwiches with Dodd could not take away from his dedication which made him the “Lion of the Senate”.

By the way, we have a new lion down in Broward Co. with Sheriff Israel. Or is this a homophone?

Ted Kennedy was your classic ‘rich kid trust-fund punk’.
He grew up fully used to & expecting that consequences for his corrupt and/or illegal behavior would be removed;
– Kicked out of Harvard for cheating (his daddy fixed that)
– His “waitress sandwich” with Chris Dodd (that, when you read the witness accounts from the restaurant, easily qualifies as sexual assault)
– Years of being/ speaking ‘drunk-off-his-ass’ in the senate
– Records of him corresponding directly to the KGB in efforts to defeat Ronald Reagan’s nuclear arms policies (worth a few decades in prison)
–
These are not to mention the untold likely times he was let off drunk driving, and whatever else similar infractions where the LEO involved was told to drop it.
–
Ted Kennedy was well-known for being the ‘father figure’ for RFK & Ethyl Kennedy’s **eleven** kids, after Sirhan Sirhan followed the example of Lee H. Oswald.
The corruption of character mentored by Teddy to his kids, nephews & nieces carried-on very well the reprobate-thug model from the grand family patriarch, Joseph P. Kennedy Sr.
(Jackie Kennedy had the common sense to isolate her two children away from the influences their whoring drunk-dog uncle).
The damage-path of drugs, alcohol, arrests, felonies, fatal overdose, suicide & fatal accident due to the ‘I’m above the law b/c I’m a Kennedy’ culture, is almost fascinating, in a morbid way.
–
A few highlights from the Kennedy spawn-pool of criminality;
Robert F. Kennedy Jr. (for heroin) & Michael Skakel, Kennedy cousin, (for murder) are both ***convicted felons***.
Guess why the name-sake son of RFK **never** ran for elected office?
Robert F. Kennedy Jr.’s misogynistic, ‘Kennedy-normal’ cruel treatment of women & spouses drove his wife Mary to suicide.
( his uncle Teddy drove his 1st wife, Joan Kennedy (mother of his kids) to alcoholism, Rx addiction, divorce, depression & being a recluse).
–
Two of the RFK & Ethyl Kennedy’s adult children earned themselves Darwin Awards, aka, are dead;
-David Kennedy from a history of illegal drug use (cocaine, et al…)
-Michael Kennedy b/c the rules against playing ski slope football, **did not** apply to Kennedy’s. Laws & rules to Kennedy’s are shift-able however, that tree, that Michael slammed his face into, ‘stood its ground’ & shifted not!
**Additional** police mugshots in the Kennedy spawn-pool (other than RFK Jr. & cousin Skakel) are;
– Conor Kennedy (punk son of RFK Jr.) in bar fight
– Matthew (Max) Kennedy (son of RFK & Ethyl)
– Caroline Rose Kennedy (brat-beeotch daughter of Max Kennedy)
– William Kennedy Smith (for rape, was acquitted)
– Douglas Kennedy (son of RFK & Ethyl) assaulting nurses
– Alcohol & Ambien DUI arrests of;
— Kerry Kennedy ( daughter of RFK & Ethyl)
— Patrick Kennedy (son of Teddy-the-drunk Kennedy)
– Ted Kennedy himself – booked for Mary Jo Kopechne’s death, leaving the scene.
At several of these arrests, LEO’s heard a Kennedy say, “…do you know who I am?”
Charming family culture, huh?
–
The sycophantic MSM has doted for decades over these Kennedy “tragedies” as some ‘Kennedy curse’.
Had **not** the venal Joseph P Kennedy Sr. arranged for the now historically proven election fraud that stole the 1960 POTUS election, it’s fairly certain Lee H. Oswald & Sirhan Sirhan would never have made those fatal head-shots in ’63 & ’68.
The only ‘curse’ afflicting Kennedy’s is their ‘content of corrupt character curse, that most of them have eagerly embraced.
They own it, 100%.

Wow. Frank must be your middle name. Very honest assessment of the Kennedys. One that nobody has ever been willing to say.

It has been a while since I have seen a “TED KENNEDY’S CAR HAS KILLED MORE PEOPLE THAN MY GUN” bumper sticker.

I am a really big admirer of Ted Cruz. But why on Earth did he look up to Ted Kennedy so much that he chose “Ted” as his nickname??