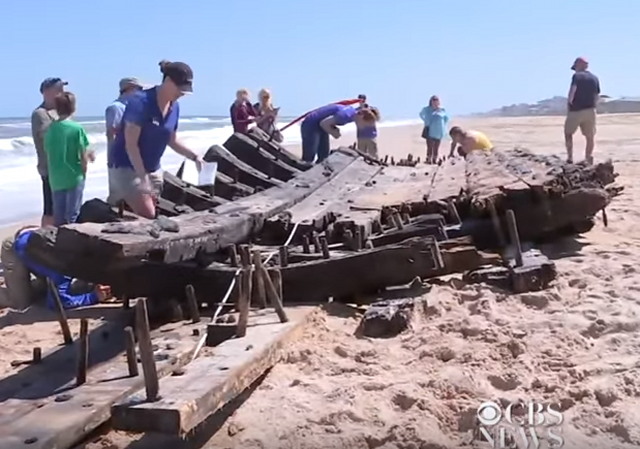 The remains of a ship recently washed ashore on a beach in northern Florida. The wreck is believed to be hundreds of years old and is surely a dream for historians.

A mother and son in Saint Augustine, Florida, experienced a much more exciting day at the beach than anticipated when they discovered remnants of an old wooden ship washed up on the sand.

During an early morning lounge session on the deck of a Ponte Vedra beach rental house on Wednesday, March 28, Julie and Patrick Turner spotted a sizable chunk of wooden debris. According to local news outlet Florida Times-Union, Julie Turner quickly notified local authorities after her son excitedly declared that the odd sighting was actually part of an old ship.

Photos: Shipwreck from Age of Sail Washes Up in Florida https://t.co/2HHcjRI8ej pic.twitter.com/Qcp5YLMbtl

As requested by state park officers, archaeologists from the Lighthouse and Maritime Museum – who have investigated many shipwrecks along the Florida coast – arrived on the scene to take photos and measurements before the 14.6-meter-long (48-foot-long) remains could be washed back out to sea…

Taken together, the preliminary evidence suggests that the remains are from a large sailing vessel dating back to the late 1700s to 1800s.

“It’s really amazing to see somebody’s writing that been buried in the ocean for well more than a century,” Burke told the Florida Times-Union.

Here’s a video report from CBS News. My favorite detail is the Roman numerals carved into the hull:

Researchers with the St. Augustine Lighthouse and Maritime Museum have been documenting the artifact and say it could date back as far as the 1700s. Marc Anthony, who owns Spanish Main Antiques, told WJAX-TV it’s extremely rare for wreckage to wash ashore.

“To actually see this survive and come ashore. This is very, very rare. This is the holy grail of shipwrecks,” Anthony said.

Museum historian Brendan Burke told the newspaper that evidence suggests the vessel was once sheeted in copper, and that crews found Roman numerals carved on its wooden ribs.

Researchers rushed to photograph and measure the wreckage. The photos will be used to create a 3-D model.

It will be fascinating to learn more about this artifact as experts unravel the mystery.

Came ashore on a Florida beach? No ID?

Yet, it was treated with respect and care. It is hard to know what washes up on our shores and turns out to have value.

As a footnote: If the wreck was from Cuba, it would not be illegal because it made it to dry land. But if it was from Haiti, it would be deported or forced to work for sub-minimum wages in squalid conditions.

Wow… that reporterette has a voice made for print journalism.

roman numerals are fascinating – probably used to number the ribs and keep them in the correct order during construction.

notamemberofanyorganizedpolicital in reply to gonzotx. | March 31, 2018 at 3:31 pm

….and use of Roman numerals, instead of Arabic numbers is SO RACIST don’t you know!

washed up or just uncovered?

We should probably blame this on climate change.

Say can I have some of your purple berries?
Yes I’ve been eating them
for six or seven weeks now
Haven’t got sick one
Probably keep us both alive

I liked JA’s version better than CS&N’s.
How about you?

Must everything that happens be viewed through a political lens? This is a wonderful find from the past. Cannot we just enjoy that?