A response to the poisoning of a former Russian spy on British soil. 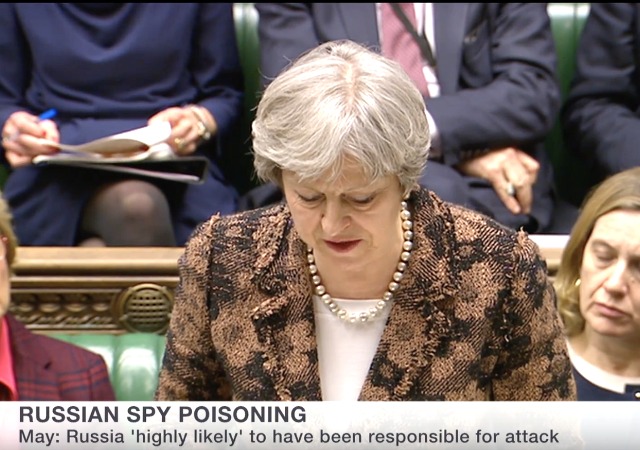 British Prime Minister Theresa May has decided to expel 23 Russian diplomats and cancel high-level contracts after someone poisoned an ex-Russian spy and his daughter in England.

May says high-level contacts with Russia will be cancelled. The invitation to Sergei Lavrov, the foreign minister, to visit the UK has been withdrawn. And ministers and dignitaries will not be attending the World Cup.

May says other measures may be taken which will not be publicised.

The Guardian also reported that the expulsion is the largest in 39 years and those leaving are undeclared intelligence officers.

The government will also draft “legislation to protect the UK from hostile state activity” and “new anti-espionage legislation.”

Labour Party leader Jeremy Corbyn spoke after May, but did not condemn Russia and pushed the government to work with the Organization for the Prohibition of Chemical Weapons. His remarks appeared doubtful that Russia did any of this, even though there are FOURTEEN other cases of dead exiled Russians in the UK in the past 20 years.

Labour’s Yvette Cooper disagreed with her leader and told Parliament “what Russia did must be met with ‘unequivocal condemnation.'” This brought many cheers from the Members of Parliament. May thanks Cooper for her comment as she knows that these “views are shared by many Labour MPs.”

The UK demanded a meeting of the UN Security Council over the attack. EU and NATO also showed support. From The Financial Times:

Separately, the president of the EU council, Donald Tusk, said that he was “ready to put the issue on next week’s [European Council] agenda.” Mr Tusk expressed his “full solidarity” with Mrs May in the face of a “brutal attack inspired, most likely, by Moscow.”

Nato also expressed “deep concern at the first offensive use of a nerve agent on alliance territory” since its foundation in 1949 and called on Russia for “complete disclose” of the Novichok family of nerve agents that the UK said was used in the attack.

On Monday, May told Parliament that the government concluded the nerve agent used to poison Sergei Skripal and his daughter Yulia “highly likely” came from Russia.

May gave Russia an opportunity to explain itself. She warned the country that the UK would take this action if no officials could provide them with a “credible response.”

I told Willard. Stop. The 1980s called. Stop. It wants its foreign policy back. Stop. I was brilliant. Stop. I’m not done fundamentally destroying the West. Stop. I need Russian collusion to accomplish. Stop. SO STOP!

Dateline: White House
From: GrifterInChief
To: Prime Minister May

The Russians have something one me. Stop STOP They can do whatever they please in their sphere of influence (Rex Tillerson explained what that is). So Stop STOP

Is Theresa May COVERING UP for Hillary?

That DOUBLE-AGENT SPY that was murdered turns out to also have been employed by the same company as Steele of the FAKE DOSSIER.

You couldn’t stop a ragtag bunch of Yankees from kicking your butts. You couldn’t stop putin from moving into Ukraine. You needed Pres. Reagan’s help to defeat the Argentinians, for goodness sake.

Apparently, your only avenue is to play stompy-foot at the U.N.? Good luck with that. Let us know how it all works out for you.

Notice that Putin used nerve toxin on two former Rooshun agents in Britain. Wonder why he didn’t do it to agents in the US? I think we all know the answer.

To all ex-Rooshun secret agents: when you relocate, come to the US and not the UK. We’ll protect you. And our food is better.

As well as banning Lauren Southern.

You’re telling me that the Russians ran out of spring loaded umbrellas to poison someone so poisoned an entire restaurant? Right, so to get this straight either Putin did it and doesn’t care what England can do about it because they can’t even stop Muslims from raping their little girls on a country-wide basis. Or the Russians suddenly got sloppy and started killing people in job lots when they meant to get one turncoat. Or it’s a false flag and somebody what’s the cold war to heat up again.

Or maybe May wants the thousands of little British girls getting raped as I type this to get out of the news. It makes her plan to turn London into Londonstan harder.

So, who uses a nerve agent, or Strontium 90, to kill expatriate Russian agents? It would be so much easier to shoot them, stab them, run them over with a lorry or taxi cab, render them unconscious and gas then in their flat or simply beat them to death with a hammer. No, one uses a method which is readily identifiable with a particular organization, such as the SVR, in order to send a message. While this could be a false flag operation {very unlikely given the collateral damage} it is much more likely that it is simply a message from the SVR. Probably to its current agents that leaving the agency is frowned upon and is dealt with harshly. These incidents have been happening for the last 10 years. Bad press does not worry Putin, as it never lasts.

What “IS” the Clinton Machine doing these days?

If it is false flag, you want collateral damage. Otherwise May couldn’t have invoked Article 5. If someone wants to keep ‘Russia, Russia, Russia’ on the global stage and reheat the Cold War what better way to do it?

Looks like the work of Grucifer 2.0 to me. Lets add lots of clues pointing to Russia, even though it won’t benefit them, and it looks like amateur work.

notamemberofanyorganizedpolicital in reply to forksdad. | March 14, 2018 at 12:56 pm

That DOUBLE-AGENT SPY that was murdered turns out to also have been employed by the same company as Steele of the FAKE DOSSIER.

forksdad in reply to notamemberofanyorganizedpolicital. | March 14, 2018 at 1:23 pm

If you’re a double agent and you die except of old age in your bed that sends a message. If you’re with the company that produced the Steele Russia dossier, what message does that send?

To paraphrase Putin: You don’t threaten a nuclear power. Stomp you feet, pick up your marbles and go home. There is NOTHING of substance you can do. Too bad.

#MeToo or a preponderance of allegations with a multidecadal waiting period, that is noticeably, selectively cut short for political convenience.