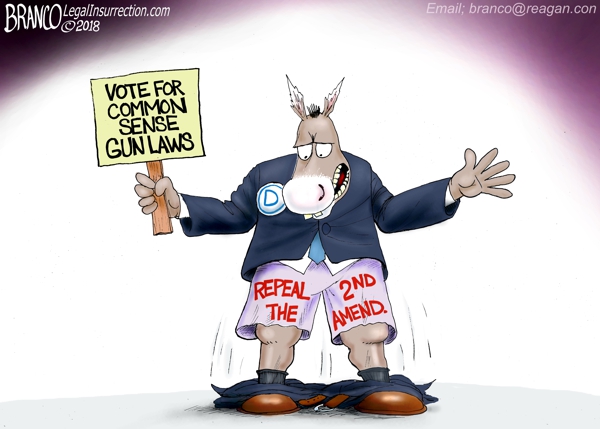 Despite the denials from the leftists for decades, this set of underwear has been worn for a long time. Nice to, well, not really nice, but glad to see it finally being exposed.

BTW, I am glad they are boxers…. just sayin’

The youngsters were just starting to believe that maybe Grandpa was a little paranoid. But today they’re going to purchase more firearms.

That would definitely hone ones aim, trying to hit center mass on a stick figure

1) Democrats represent a wide variety of opinion, most of whom want commonsense gun control, but do not want to repeal the Second Amendment. The cartoon conflates a disparate group, nor is repeal consistent with the Democratic Party platform.

2) Justice Stevens, the most notable person calling for repeal, is a Republican.

1) One can make so many “common sense” laws as to castrate a right. The founders considered firearms the “teeth of liberty” … pluck enough teeth out and you can’t chew.

2) Appointed by a Republican president. Secondly, decidedly turned progressive once on the bench. At least the Democrat selected justices not only tow the party line but push it further left.

Note: The Left and MSM call every student in Florida at that school “survivors” even if they were not in school that day… such as Hogg who showed up after the mayhem.

Apparent correction… Hogg in different building on campus. “Participant” but not a “survivor” sound better?

Words mean something and intent can be obscured by using more general terms and platitudes.

As for a plank in the Democrat Party… telling the truth of neutering the Constitution would leave the Party in the wilderness. For now the game plan is obscure intent with platitudes and go for the long game. People then will not notice that the chains will begin to lie less softly on their shoulders.

Name one “pro-gun” law a majority of Democrats favor and has passed.

alaskabob: 1) One can make so many “common sense” laws as to castrate a right.

The Democratic Party is a coalition of many different voices. If laws are pushed which overly restrict gun rights, a reaction by the public and within the party will tend to move the party back towards a moderate stance.

alaskabob: 2) Appointed by a Republican president. Secondly, decidedly turned progressive once on the bench.

There used to be a sizeable moderate even progressive wing within the Republican Party. Stevens, a lifetime Republican, is a vestige of that.

alaskabob: The Left and MSM call every student in Florida at that school “survivors” even if they were not in school that day… such as Hogg who showed up after the mayhem.

That’s silly. The school was shot up. Many of their friends were killed or injured. There’s no way this isn’t a highly significant and threatening event in their lives.

Stevens is a doddering old fool.

Communists are actually pretty big on arming the working class. As long as the military and the police out-arm the population the latter will always remain subservient to the owners of this country. Owners who are smart enough to bribe both sides of the isle

There. I fixed that for ya

murkyv: There. I fixed that for ya

There used to be a sizeable moderate even progressive wing within the Republican Party. Stevens, a lifetime Republican, is a vestige of that.

“The cartoon conflates a disparate group,”

36% of Democrats support repeal of the 2nd Amendment.

And those are just the one stupid enough to say it out loud.

If your gun control “measures” had any common sense, you would not need to assert they were Common Sense measures, it would be evident. Democrats cannot even accurately define the thing they want to ban, so it doesn’t follow they would have common sense solutions.

Here is one: let’s ban the AR-71, anyone with two brain cells can get behind that, right? Why does anyone need a flux capacitor to hunt dear? It’s common sense….

But the most telling statistic, 99℅ of Democrats are lying weasels with zero intellectual integrity or shame, and therefore cannot be believed when they insist they don’t want to disarm us.

Bravo! Sad that we need to reply to Leftist Trolls, but you did a fine job.

Fen: 36% of Democrats support repeal of the 2nd Amendment.

So it’s a minority position within the Democratic Party. One in ten Republicans also support repeal.

The problem is that for over a generation the grownups have failed to protect schoolchildren from such attacks. At this point, there is nothing preventing further incidents.

Assault rifles are the scary black ones that go pew! pew! pew!