Australian Diplomat Who Triggered Trump-Russia Investigation has Ties to Clintons

Australian Diplomat Who Triggered Trump-Russia Investigation has Ties to Clintons 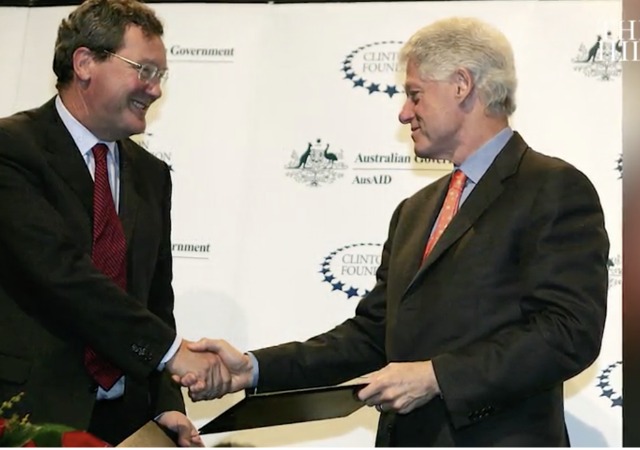 Nothing to see here I guess except that the man who provided the tip to the FBI that started the whole Trump-Russia collusion investigation has ties to failed Democrat presidential candidate Hillary Clinton.

The Hill published government memos from 10 years ago on the foreign ministry’s website that shows what Downer did to secure that donation:

Downer and former President Clinton jointly signed a Memorandum of Understanding in February 2006 that spread out the grant money over four years for a project to provide screening and drug treatment to AIDS patients in Asia.

The money was initially allocated to the Clinton Foundation but later was routed through an affiliate of the charity known as the Clinton Health Access Initiative (CHAI), officials said. Australia was one of four foreign governments to donate more than $25 million to CHAI, records show.

The Hill noted that Downer told officials about “a conversation with Trump campaign adviser George Papadopoulos at a London bar in 2016 that became the official reason the FBI opened the Russia counterintelligence probe.”

The FBI allegedly never told lawmakers that Downer had previous ties to the Clintons:

Republicans say they are concerned the new information means nearly all of the early evidence the FBI used to justify its election-year probe of Trump came from sources supportive of the Clintons, including the controversial Steele dossier.

“The Clintons’ tentacles go everywhere. So, that’s why it’s important,” said Rep. Jim Jordan (R-Ohio) chairman of a House Oversight and Government Reform subcommittee that has been taking an increasingly visible role defending the Trump administration in the Russia probe. “We continue to get new information every week it seems that sort of underscores the fact that the FBI hasn’t been square with us.”

“Schiff made a big point of this in his memo and comments he’s made, where he said ‘the dossier wasn’t the most important thing they were investigating, and the catalyst for the Russian investigation was this Papadopoulos meeting,” the Ohio Republican told The Daily Caller. “Now we’ve learned, the thing they kept hanging their hat on was the Papadopoulos meeting with Ambassador Downer, and it turns out that Mr. Downer now had ties to the Clintons as well.”

“He arranged $25 million in contributions to The Clinton Foundation, and I believe that Downer arranged the meeting with Papadopoulos. It wasn’t just, ‘oh shazam, we’re in the same bar and this guy is just shooting his mouth off.’ It wasn’t a coincidence.”

Not only that, but it brings up new questions about when and what Obama’s administration knew:

“We learned in July that the FBI had the dossier. And then we subsequently learned it wasn’t just the FBI who had the dossier, it was also the Justice Department, mainly Bruce Ohr. So it’s, like wait. The obvious question is now did the White House have it? Did Obama know? We don’t know the answer to that question. But the pattern suggests that those 10 questions that Devin [Nunes] sent to those 24 people a couple of weeks ago, and he got those first responses back on Friday, those 10 questions on the dossier are so important.”

Of course, Democrats accuse Republicans of overreaching because it’s totally not a big thing that a man with ties to the Clintons started this investigation:

“The effort to attack the FBI and DOJ as a way of defending the President continues,” said Rep. Adam Schiff (D-Calif.), the top Democrat on the House Intelligence panel. “Not content to disparage our British allies and one of their former intelligence officers, the majority now seeks to defame our Australian partners as a way of undermining the Russia probe. It will not succeed, but may do lasting damage to our institutions and allies in the process.”

Nick Merrill, Hillary Clinton’s spokesman, said any effort to connect the 2006 grant with the current Russia investigation was “laughable.”

The Clinton family said the story should be about how that donation helped bring medicine to those with AIDs in Asia. Yes, that’s great, but that doesn’t excuse corruption. But it seems that’s all the Clintons know…corruption.

[Featured image via The Hill video]

It doesn’t matter since the tip was true. The dossier is true, too. Deny it all you want since the candidate you wanted won. But doesn’t it bother any of you that Trump is beholden to Russia?

No? Well, then don’t go around call your opponents traitors or treasonous. I can’t stop you. But for those with a conscience or a willingness to face the truth, something has got to be gnawing at you.

The rest can start the name calling …. NOW

This troll is one of the three people in the entire United States of America who doesn’t know that the Mueller investigation into this matter continues to find exactly nothing.

So two sock puppets, I can’t imagine that you really need two. BTW the least you can do is up vote your disgusting post 2 times. SMH.

Yellowgrifter: at least you are honest about yourself in your moniker.

Is this meant to be some kind of joke? The Australian Government – not Alexander Downer – contracted with the Clinton Foundation to deliver health aid to developing countries in Australia’s region. The idea that represents ‘a tie between Downer and the Clintons’ is comically ludicrous. Downer is a conservative’s conservative who adored the George W Bush Administration. He’s as likely to try to help Hillary as to fly to the moon.

You had me right up to ‘George W Bush’

Downer was not coerced, nor did he blow the whistle, when he signed the document.

But, magically it seems, he comes after President Trump.

The b.s. meter is almost up to rag’s level….rarified air, indeed.

IIRC, Donald J. T-rump was a BIG contributor to the Clintons.

The level of trolling on all the sites I have been going to have increased 10 fold. I think something is going to break soon. The trolls are tag teaming so it is a coordinated effort.

Yup. Makes perfect sense to me. Just don’t see how it’s relevant to anything.

Irv, every lefty effort, from the phony recounts, the harassment of the electoral college, the Hillary/dnc financing of the phony dossier, to the Mueller fiasco has been an ongoing attempt to depose a duly elected President.

How come irv name links to a Tokyo whois record?

C’omon dude … at least if you are going to go all conspiracy, at least do it correctly. http://chaosprg.com/blog

Don’t go to the site. Is it suspect.

Maybe Sam joined them too.

The reach of and multinational “loyalty” to the Clintons are breathtaking. Sometimes literally if one’s mind wanders to the series of unfortunate happenings to people around them. They appear to have around them the talent to make things happen.

Am I the only one who misread “tentacles”?

I’m old enough to remember the big maps that were shown in the Movietone news before the main movie and it showed a map where the Russians were slowly taking over Europe. It was a black and white map with red spreading like the tentacles of an octopus spreading over the eastern nations of Europe. It was horrifying to see! But now I can see what the clinton’s have done, a similar map would look the same if it was the evil influence of their corruption instead of Russian hegemony. The only sure end to this horror is to put a wooden stake through Chelsea’s heart!

Unfortunately there was no live-mike.