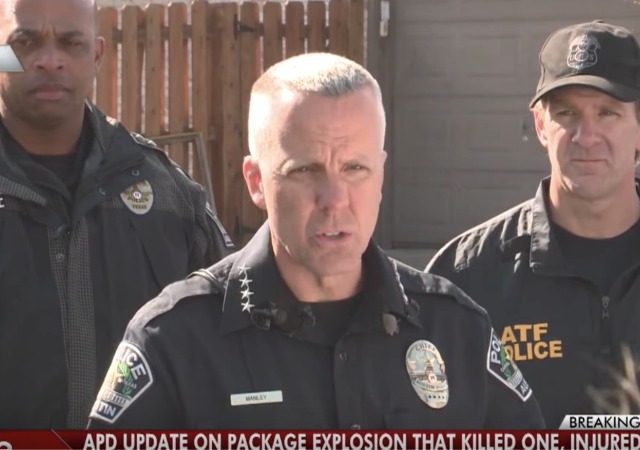 Early this morning in Austin, an explosion from a package killed a male teenager and injured a woman. From Fox News:

Damage inside the home from the early morning blast is “significant,” according to Manley, who added investigators are going to nearby homes to see if any outdoor surveillance footage exists.

Neighbor Cynthia Burdett, who has lived in the neighborhood since 1999 and close to the home where the blast took place, told FOX 7 she was in “total shock” and the whole incident was “very scary.”

“I checked my house first of all to make sure nothing was on fire, I did look outside at that point and next thing I knew police were knocking at the door saying that there was a suspicious package, one had exploded and that I needed to leave the house,” she told reporters.

A few hours later another explosion occurred and injured a woman in her 70s, only 11 miles from the first explosions.

Three blasts in two weeks have hit the capital city of Texas. Authorities believe the first attack is connected to an attack that happened on March 2. Fox News continued:

In that incident, 39-year-old Anthony Stephan House was killed after a “device” exploded on the front porch of his home in the city’s northeast Harris Ridge neighborhood about 12 miles north of Monday’s blast. Both explosions occurred in the early-morning hours.

House’s death was initially called a homicide, but police last week said it was considered a suspicious death because officials hadn’t ruled out the possibility the victim may have constructed and accidentally detonated the device himself. Manley said that case has now been reclassified as a homicide as of Monday.

There is no known motive at this time, but Manley said both blasts took place at homes of African-American residents so authorities “cannot rule out hate crimes.”

What we clearly need is students from Parkland, FL, to be bused in to demand the Texas Legislature pass “gun control”.

That should fix everything.

“The trouble began soon after they arrived.

The black family—a mother, three teenage children and a 10-year-old boy—moved into a little yellow home in Compton over Christmas vacation.

When a friend came to visit, four men in a black SUV pulled up and called him a “ni**er,” saying black people were barred from the neighborhood, according to Los Angeles County sheriff’s deputies. They jumped out, drew a gun on him and beat him with metal pipes.

It was just the beginning of what detectives said was a campaign by a Latino street gang to force an African American family to leave.”

There is no known motive at this time, but Manley said both blasts took place at homes of African-American residents so authorities “cannot rule out hate crimes.”

And if they had been in any other kind of home they would? How does that make any sense? No matter who the victim is, you can’t rule out hate as a motive until you find out what the real motive was. Everyone is hated by someone.

I’m also seeing an update that one of the victims was Hispanic.

“A 75-year-old Hispanic woman, Manley said, also opened a package that she found outside her home, which detonated. The woman was “significantly injured” during the explosion and was taken to the hospital with potentially life-threatening injuries.”

My first thought about this was, does it have anything to do with BLM and the murder of those police officers? Knowing Texians mindset, it seemed unlikely they would allow those murders to go without retaliation. With a Hispanic victim, that now seems unlikely. It is probably just another nut case.