Austin Bombing Suspect Blew Himself Up After Police Chase

Austin Bombing Suspect Blew Himself Up After Police Chase 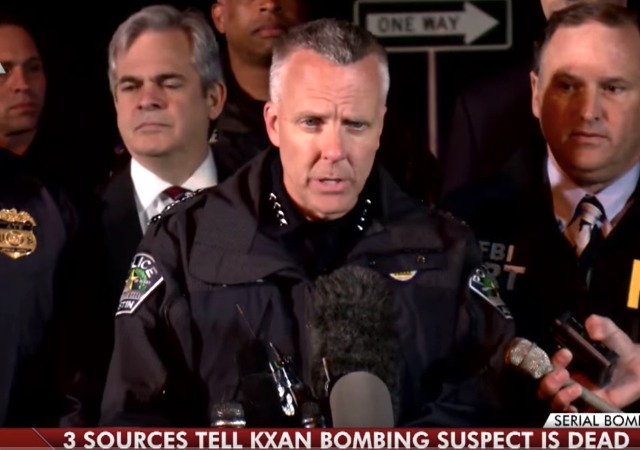 Michael Anthony Conditt, the 24-year-old male suspect in the Austin bombings, blew himself up in his car early this morning after the police chased him. From KXAN:

The explosion happened on Interstate 35 in Round Rock near Old Settlers Boulevard around 2 a.m. Wednesday. Investigators had recently identified a 24-year-old white man as a person of interest and then a suspect, and found the vehicle he was known to drive at a hotel in Round Rock.

Law enforcement took up positions around that hotel and was waiting for APD’s tactical team to arrive to take the suspect into custody when he started to drive away. Officials followed, and the man pulled to the side of southbound I-35.

When SWAT approached, Chief Manley says the man detonated a bomb, which knocked one SWAT officer back and gave him minor injuries. Another officer who is an 11-year APD veteran fired at the suspect. He will be placed on administrative duty, per APD policy.

Manley said they still do not have a motive and there may be bombs out there:

He also warned the public that officials do not yet know what the suspect did in the past day, and they don’t know if there are any more devices in the community. Law enforcement officials warn residents in Austin and surrounding communities to be vigilant and report anything suspicious.

Another media outlet in Austin received surveillance photos of what appears to be the suspect inside the FedEx shipping store on Brodie Lane. The pictures show a timestamp of March 18, 2018 at 7:37 p.m. The suspect, who has blonde hair, is wearing a baseball cap and can be seen carrying two packages. His hands appear to have gloves on them.

At first the police thought the suspect based his attacks on race. However, on Sunday, an explosion caused by a trip wire injured two white men as they rode on their bikes.

A fifth explosion occurred on Tuesday at a FedEx facility, which “led authorities to another suspicious package at the FedEx facility in Austin.” They did not identify the recipients of the packages, but they have been in touch with them.

Now to find out if he acted alone.

We don’t need to know his name. Just refer to him as the coward with the bombs from Austin.

killers family, unless complicit, should not be tainted by that turd.

Think about this for a moment.

While not publicizing the identity of a person who commits a terrorist event MIGHT act as deterrent, there is no guarantee of that. After all, Ted Kaczynski operated for 17 years [1976-1995] before making himself known in any significant way. It was not until 1995 that he sent his essay and demands to authorities. This, of course, proved his undoing.

On the other hand, if we did not know the identity of Stephen Paddock we would never know the gaps and inconsistencies in the man’s background, though we might sleep better at night. Nikolas Cruz knew that he was ill and was going to commit a notable act of violence, very likely a school shooting, and told people about it in person and through social media. If we were never told of his identity, then we would not know what signs to take note of in the future.

This does not mean that we should celebrate these people and their activities. And, it also means that we should take a close, hard look at how our society gushes over any kind of celebrity. If we can change that, perhaps we will never see Madonna in a crocheted, pink hat in the shape of a goat udder.

While not publicizing the identity of a person who commits a terrorist event MIGHT act as deterrent, there is no guarantee of that.

Not publishing his name has nothing to do with deterring, but everything to do with not recognizing the bad actor. This kind of human filth deserves to be shoved in a black hole. That’s it.

Along the same lines, I’ve never understood the argument that the death penalty serves as a deterrent. If it did, murder would have ended thousands of years ago. The death penalty is punishment for the criminal, plain and simple.

It’s not a deterrent for that murderer, obviously.

It doesn’t follow that it’s not a deterrent for any other wannabe murderers.

By definition, we have no idea how many crimes don’t happen, and we can only speculate as to why they don’t happen.

CNN won’t go for that. They’re too interested in feeding the narrative about how ‘violent white males’ are. They long to release the name of a suspect causing such mayhem.

Maybe he wanted to make the Cover of the Rolling Stone, like Tsarnaev?

and sadly likely he will get something similar. But right now they are busy scrubbing his Fakebook page of TDS and leftie adoration.

I knew he would be under 30, because he said on Reddit that he was 30-50. Anyone over 50 would realize that the police would not be fooled by that and would know he was NOT between 30-50.

My sympathies to his victims.

I feel relief but sadness. What is happening to our young males that they are so disenfranchised, so angry that they want to cause such damage and watch the world burn

There seems to be a link missing here. One’s Facebook posts usually do not jump from “Love they neighbor”, “Turn the other cheek” to “KILL!!!!” overnight.

And yes, I know he had “limited social media”, but my point remains valid.

The problem is that many people use the term ‘Christian’ to mean that they were raised in a church (could be Mormon or Catholic) when they were a child. But years later when they become adults and haven’t gone to church for years, when someone asks them their religion, they will say, they were ‘raised a Christian’. This is what society does even when they most likely are so removed from the practices of what Jesus would have done, but nonetheless, it’s the norm to wear the label when asked.

I don’t think we knew he was ‘religious’ and I’m not even sure what that means. I know social media and TMZ have been playing up what he said about gays when he was 17. But reports showed that he was a registered Democrat.

Another officer who is an 11-year APD veteran fired at the suspect. He will be placed on administrative duty, per APD policy.

Sometimes I have a hard time understanding certain “policies”.

Administrative duty is done to remove a LEO from public duty until the investigation of the shooting officially determines that the shooting was justified and within departmental policies and state laws. It does not denote that the LEO did anything wrong or even unacceptable. In the case of a shooting which results in injury or death, it also allows the LEO time process the fact that he injured another person and to obtain counseling if necessary. It can last as little as 24 hours.

This could have all been stopped before the first bomb went off. Simply place “Bomb Free Zone” signs around in public and at private businesses. No bombs will be brought near their vicinity. Problem solved.

While understood by anybody with half a brain what this comment is, for those without a brain you need a /sarcasm tag.

If it is the same guy who posted on reddit, he was trying to send a bomb to Alex Jones.

If no one saw anything like this coming from this monster, I have to wonder how hard they were looking. While various signs of personality disorders aren’t easy to detect, and few people ever go this route, it seems there had to have been some signs that something wasn’t quite right.

This is similar to the original reports of the Vegas shooter. No sign of anything, then the troubling reports started coming in.

I know he had blue eyes ,one blew this way, the other blew that way

Raise your hand if you believe the media is going to report honestly and actually about this bomber.

Funny how that whole Vegas thing dropped off the radar rather quickly, isn’t it?

they are crazy. You can’t rationally understand what they “thought”. It isn’t rational. I might never be “understood” because it isn’t understandable.