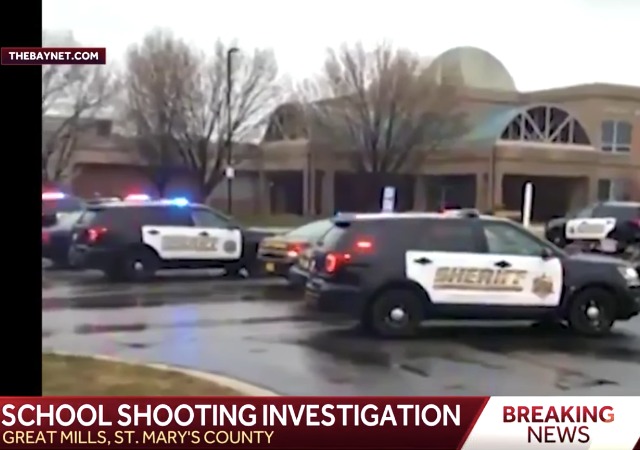 The officer is a trained and armed deputy sheriff.

The gunman entered Great Mills High School in Great Mills at the beginning of the school day and shot a female student in a hallway, Sheriff Tim Cameron told News4. A male student also was hit by a bullet.

Two students are in critical condition, and the shooter was pronounced dead later Tuesday morning.

Information was not available immediately on the relationship between the students, Cameron said. A motive is not yet clear.

The SRO received notification of the shooting and “quickly engaged with the shooter.” He was not injured.

Cameron relayed to the network that his department has prepared for these emergencies:

“You train to respond to this and you hope that you never ever have to,” he said. “This is the realization of your worst nightmare — that, in a school, that our children could be attacked. And so as quickly … as that SRO responded and engaged, there’s grievous injuries to two students.”

He added, “Now begins the second phase of this operation, and that’s the background and the investigation and the attempt for the school to return to normal.”

The sheriff also stressed “that the situation would have been worse if the SRO had not engaged the shooter.”

A month ago, cops investigated shooting threats towards the high school after parents told them of a Snapchat post that warned of a planned shooting. Principal Dr. Jake Heibel told parents and guardians that the administration and the SRO interviewed the student and they concluded “[T]he threat was not substantiated.”

Authorities have not released information about the shooter so we do not know if he/she is from the Snapchat post.

No. Broward County proved that that’s a myth. If a “good guy” with a gun tries to get involved he’ll most likely shoot an innocent bystander. Didn’t you get the talking points?

It’s stopping a bad man (or person, in general) from doing even more damage. Two other kids were shot by the perpetrator. We should be grateful it was not far more. However, I try to keep mindful of the fact that “stopping” is relative.

what a difference a spine and some cajones make.

The proverbial good guy with a gun.

Unfortunately, it needs to be investigated, and that’s hard to do in secret.

Without an investigation which reveals some background, we know very little about this incident—that there is one dead body, two injuries, and one shooter—the School Resource Officer. Lacking more info, we’ll be left in data limbo … just like the Las Vegas atrocity.

There’s no question about an investigation.

There’s no question about any investigation by the press.

Isn’t the word “shooter” supposed to refer to the perp?

I am not really thinking that releasing the name will be a problem. This is the way it should be, he didn’t kill anyone and he is dead. Releasing the name might actually be good as a warning to others that will try.

Apparently the girl isn’t out of the woods yet, so we “hope” he didn’t kill anyone.

No. The name of the deceased shooter is irrelevant. What needs to be known is that, as stated above, he broke several laws in bringing a gun to the school and shooting people, and he died for his efforts; hopefully it will remain two non-fatal shootings of his doing, AND he will remain dead in relative obscurity, his name not plastered all over the MSM.

The lesson must be that if you do this s**t you will end up dead and unknown. That is the deterrent.

The government has to release the name. Private news organizations are not obligated to sensationalize it. After all, they don’t work for the government.

The 1st amendment says we have freedom of the press; it doesn’t require the government to provide the script.

Tell everyone that the name of the shooter is Les Moore.
His Tombstone:
Here lies Les Moore
Was an idiot who shot someone at school
He’s no Les… No Moore….

Oh good, the school’s on “lockdown”. That should fix everything.

“Two students are in critical condition, and the shooter was pronounced dead later Tuesday morning.

Information was not available immediately on the relationship between the students, Cameron said. A motive is not yet clear.”

Good grief. I think it’s time to consider a ban on public schools.

So, here we have a situation where a 17 year old somehow gains illegal possession of a handgun, carries it illegally to a school and shoots a girl, with whom he reportedly had some type of relationship. In the process, he also wounds a male student, though we do not know if this was done accidentally or on purpose. Then, again according to reports, the 17 year old shooter runs away and a SRO pursues him and exchanges gunfire with him, ultimately killing him. All of this in a state having some of the strongest gun control laws in the country.

So, will this be a breakdown in the mental health services in the state? Perhaps it will be the fault of the NRA. Perhaps stronger background checks could have prevented this. Or maybe, because only two innocent victims were shot, this will be touted as a roaring success for schoolhouse security. It will be interesting to see which it turns out to be.

Last Wednesday, Great Mills students participated in a nationwide “school walkout” on the one-month anniversary of the Parkland shooting. The students called for an end to gun violence and more school safety measures, according to local news reports.

One of the student activists from Marjory Stoneman Douglas tweeted her anger about the Great Mills incident.

“Less than a WEEK ago Great Mills High School students walked out with us to protest gun violence…now they’re experiencing it for themselves,” Jaclyn Corin wrote. “The state of our country is disgusting – I’m so sorry, Great Mills.”

You have got to be fucking kidding me …

The news will be tailored to prevent embarrassment to state and local agencies and maximized against private ownership and NRA. We will know quickly about the shooter if not “a person of color”.

Coulter’s Law, or a variant, applies.

Maybe teaching young boys that they are racist, misogynist homophobes, that the world doesn’t need them and that they are evil spawn wasn’t such a good idea after all.

“School Resource Officer”? How ’bout we give these guys/gals a real title like “School Marshal” or “Building Police” or “Facility Protection Force.”

Interested in knowing the weapon. I suspect a handgun since if it were an AR-15 or other evil assault weapon, it would be all over the headlines…

It was a GLOCK pistol. I do not know which model, at this time.

Everything is either a Glock or an AR-15 to the msm. I’m still praying for that reporter who got ptsd from firing one of those damned AR-15’s. Hopefully, waking up screaming and his night sweats and will go away someday. sarc

So this story is already off the headlines. That was fast!

Yes cupcake, the bad guy didn’t give a rat’s ass about your silly little protest. Imagine that

How the Left will spin this: The resource officer did not stop the shooting, two students were shot. There’s no evidence the officer stopped a mass shooting because we don’t know the shooter’s intentions.

Had four or more victims been killed before the shooter was killed by the officer, the Left would say, “The officer did not stop a mass shooting, he interrupted one in progress. The event was still a mass shooting.”

So, prevent more than four victims being killed and it’s not a mass shooting. Stop a shooter after four or more are killed and a mass shooting wasn’t stopped. A win-win for the Left, the way they understand the scenarios.

Technically, as only one person died, it was NOT a mass shooting. Of course, as it occurred inside a school, it was a school shooting.

As to whether the SRO stopped a mass shooting, it is difficult to tell without an accurate timeline. If the gunman fired one or two shots and then stopped and/or ran away, this would suggest that he did not intend to shoot more people than the one with whom he had a relationship and, therefor, this was not an attempted mass shooting.

My personal opinion is that the libs will consider this simply domestic violence in a school and ignore it. After all, they can’t get much gun control traction out of a minor illegally possessing a pistol which he transported to school in an illegal manner and which he was able to introduce into the school due to a lack of security at points of entry and that said minor was shot by an armed police officer stationed at the school. It is already off the radar.