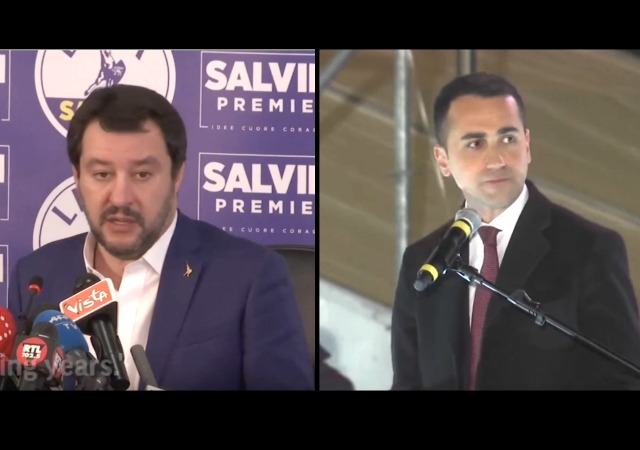 Anti-European Union parties made a huge leap in Italy’s general election, but no party has (so far) come away with a majority. This means Italy faces a hung Parliament and can take a long time to form a government.

The situation mirrors the UK when Prime Minister Theresa May held snap elections last year and no party came out with a majority.

Voters made immigration and the economy the main topics for this election. Italians have shown frustration over the government’s handling of the hundreds of thousands of migrants from Libya since 2013. Plus, the economy has tanked and in 2016, “some 18 million people were at risk for poverty, and unemployment is currently at 11%.” 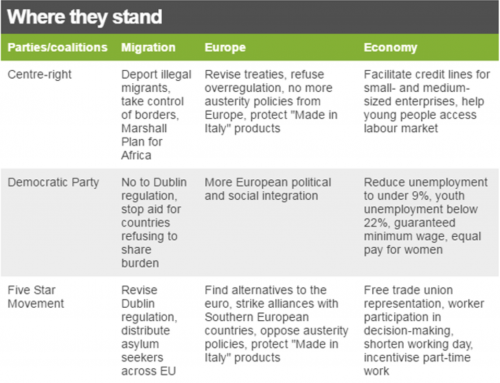 So if you look at the graphic, it’s not a shock that the two anti-EU parties gained a lot in the election. From The Economist:

The leading party was the Five Star Movement (M5S). Capitalising on the anger of the south and the young at Italy’s arthritic economy, the M5S appeared to have broken through the 30% ceiling that it has long failed to breach in the polls. The other big winner from a ballot that will shake the rest of Europe was the hard right, populist Northern League, riding a wave of alarm in Italy over the arrival in recent years of hundreds of thousands of migrants. Taken with a third populist party, the far-right Brothers of Italy, anti-establishment parties look to have won comfortably over 50% of the vote.

Luigi Di Maio, the leader of Five Star, said his party showed such a strong showing that the party should run the government. But League leader Matteo Salvini made the same claim.

The results as of Monday stand as this:

So M5S and League can form a coalition, which will place them at 50%. However, who knows if M5S will want to join a coalition since they have not committed to joining forces with another. The Democratic Party and Forza Italia along with “some minor centrist parties” could form their own coalition.

If no one decides to form a coalition then President Sergio Mattarella “has to choose someone to form a government when neither of the blocs have enough to govern alone.”

AREN’T YOU THANKFUL TO LIVE IN A REPUBLIC? These European elections give me a headache.

Even though Mattarella can choose someone to form a government, M5S has “more than a third of the seats in both houses” which means the party can “block any government it opposed.” The Economist continued:

As one of its leading members, Alessandro Di Battista, put it: “They’re all going to have to come to speak to us.” The only feasible coalitions signalled by the partial results were M5S pacts with the centre-left Democratic Party (PD), which was trounced at the polls, or—the nightmare scenario for markets and pro-Europeans—the League.

BBC Europe editor Katya Adler said that the results could be a nightmare come true for the EU: “a coalition between the ‘populist Eurosceptics’: Five Star and Lega [the League party]”. HOWEVER. One must remember that even though these parties are anti-EU, their leaders have softened their tone on the EU:

Mr Di Maio, however, recently shelved the party’s demand for a referendum on Italy’s membership of the euro, and Mr Salvini has also said that he does not believe it is time for an exit from the single currency. But there is still plenty in the electoral programmes of both parties to rattle markets, such as lavish spending plans that would add several tens of billions of euros to Italy’s budget deficit and its already dauntingly high public debt, of around 130% of GDP.

They also have in common is a sympathetic approach to Vladimir Putin’s Russia. Mr Putin too was one of the victors in Sunday’s election.

Parliament has until the summer to form a government. If that does not happen, then Parliament will be dissolved.

I hope you don’t mind, but I am stealing that!

“but no majority” means no unified government.

Italy is the main reason why I prefer a two-party system.

I expect they’ll do what Germany and the Netherlands are doing: so long as the right-wing parties can’t get 50% of the seats by themselves all the leftist and centrist (which are really slightly less leftist) parties are banding together to lock them out. They’ve never before displayed such unity.