3 hospitalized after suspicious letter opened at Virginia Marine Corps base

3 hospitalized after suspicious letter opened at Virginia Marine Corps base 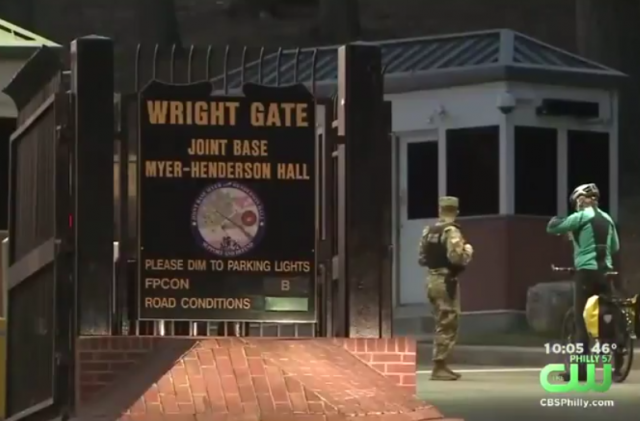 Thursday, Kemberlee blogged that a Massachusetts man was arrested for allegedly sending the Trump’s the white powder-laced letter.

That powder was determined to be cornstarch and nobody was injured. However, in a separate incident last week, a suspicious letter containing an unknown substance was opened at a Marine Corps base in Virginia, which resulted in 11 people being treated for severe eye and respiratory system irritation.

Staff at the Joint Base Myer-Henderson Hall in Arlington suffered nose bleeds and complained or burning sensations after the unidentified chemical sparked a hazmat situation on Tuesday.

Henderson Hall is the headquarters of the US Marine Corps. It is an administrative center that includes both military and civilian personnel.

Three people had symptoms severe enough to require hospitalization. Fortunately, all three have been released.

The problems started when a sergeant opened up the letter as it arrived at the base.

The Pentagon official told NBC News a gunnery sergeant opened a letter and showed it to a superior. The two then started to feel sick.

A colonel decided to evacuate the building. Several and police units and medics responded to the scene.

The text of the letter was a screed directed at the commanding officer.

The law enforcement official said the text of the letter contained derogatory, at time unintelligible and ranting language, and was addressed to a commanding officer at the base. Investigators are still determining what relationship, if any, the sender had with the base.

It will be interesting to see if they determine both the perpetrator and the motive: Revenge, terror, or progressive politics. You can bet that if leftist politics is behind the letter, there will be near media silence on the matter.

Interesting that there has been no further information on this 3 day old story.

I know – I hate to say this, and I have great sympathy for the people who have been terrorized by this; but I suspect that the powder is going to turn out to be something like chalk, and the hospitalizations will turn out to be from psychosomatic causes.

I suspect that if it had actually been anything dangerous, that would have been publicized already, but it’s in no ones benefit to admit that it really wasn’t anything harmful. The terror intent was still there, so it was still a criminal act, even if it was just chalk.

if i recall correctly, these sort of ‘white powder letters’ were common during the Vietnam war era.

For some reason, both Kemberlee and Leslie imagine that plurals of surnames require an apostrophe before the “s.”

Me too; I’ve never believed that to be ‘correct’, but thought it made the written text easier to read.

Why did you put “correct” in scare quotes as if there’s some question about it? It’s also an odd concept to imagine that you can write English incorrectly for the sake of making it easier to read.

What was it that Churchill once said? “That is the sort of language up with which I shall not put.”

Those aren’t scare quotes surrounding the word correct, they simply bring attention to the fact that language has no ‘correct’ usage as far as I’m concerned. Of course, English teachers would object to my assertion.