“violence broke out while the event was concluding inside” 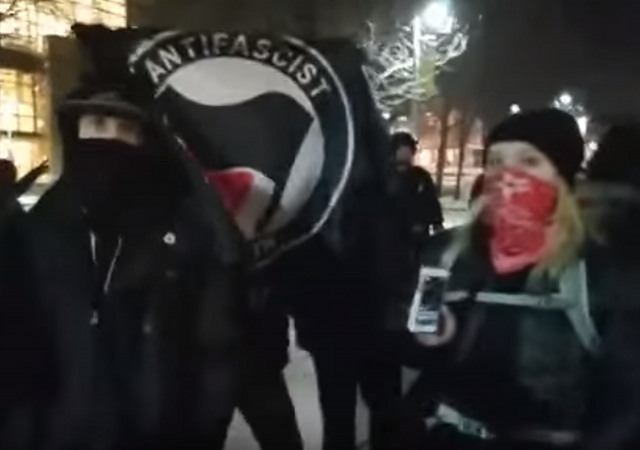 Charlie Kirk of the conservative organization Turning Point USA spoke at Colorado State University this weekend. While Kirk’s speech apparently went on without a problem, extremists of all stripes clashed outside the building in protests that had to be dispersed by police.

Antifa was there to protest Kirk, and before the night was over, a group of supposed Nazis showed up and clashed with them. Nick Coltrain reports at The Coloradoan:

Protests around a conservative speaker at CSU on Friday night started peaceful, even if it got rowdy at times, but quickly turned violent when a group wielding riot shields, large flashlights and face masks emblazoned with skulls stormed a dwindling crowd while chanting a Nazi slogan.

Campus police, who were wearing helmets with riot masks throughout the event, shut down the clash and drove the groups off. Members of the Larimer County Sheriff’s Office later showed up wearing tactical gear.

Protesters were drawn to campus because of a speech by conservative activist Charlie Kirk of Turning Point USA, which says on its website it is devoted to the promotion of the principles of fiscal responsibility, free markets and limited government.

Protests prior to and during the speech were orderly. The violence broke out while the event was concluding inside the Lory Student Center.

Emeshe Amade, a CSU student, said at first she thought the group chanting the slogans were police breaking up the argument because of how equipped they were. Members of campus socialist groups and self-described anti-fascists were arguing with others at the protest about politics when about a dozen members of the third group stormed.

CSU police’s Chief Scott Harris issued a dispersal order due to “a risk of an imminent threat of potential violence” following the speech, CSU spokeswoman Dell Rae Ciaravola said. “A group was moving into the area and was confirmed to be armed with bats, shields and gas masks.” She said fewer than 200 people were on the plaza at that time.

Perhaps it’s time to start treating violent extremist groups on both sides as what they are – gangs. These people are thugs who seem to show up at events just looking for a fight.

Antifa Attempts To Shut Down Another Conservative Speaker In Colorado, Violence Ensues

The fascist group that claims to be against fascism has once again provoked a violent confrontation because of someone expressing a point of view they disagree with. And to make matters worse, some white nationalist clowns showed up to help.

According to reports, protests outside the venue where Turning Point USA’s Charlie Kirk was speaking were largely peaceful. However, near the end of the event, socialists and self-described anti-fascists clashed with a third group on the campus plaza.

The members of Antifa have a disability when it comes to detecting irony. They remind me of that one Imam who said, during the protests over cartoon depictions of Muhammad, “Stop calling Muslims violent, or we’ll kill you.”

If someone is fascistly anti-fascist does that make them pro-fascism or just neutral? Obviously these idiots aren’t neutral, they’re just projecting their own fascist tendencies onto others. The far left is very good at attacking the right for doing things of which the left is guilty. But you already knew that. It’s already a cliche.

Here’s a quick glimpse of the scene:

Witnesses say ANTIFA and a white supremacist group are out on the Plaza. Police have released audience members from the Charlie Kirk event, cautioning them to not leave by the Plaza. @CSUCollegian pic.twitter.com/IOTQl9G9Gv

Got heated today after my speech today at Colorado State University

Had ANTFIA, disgusting white-nationalists, and hundreds of protestors outside event

Why free speech is awesome: these handful of radicals screamed at each other while hundreds of students filled our event! pic.twitter.com/HrurGK2ox3

Best way the police could have broken up the demonstrations: water cannons. Not directed at the thugs but over them. Cold water and winter does not make for a happy thug.

The police should use the directed spray canisters that release a permanent dye. This leaves the skin marked(like bank robbery dye packs) so that law breakers can be apprehended many days later. Rioters should be apprehended, penned up, arrested, finger printed, booked and at the very least held over night for arraignment.

Still and again, leftists always, eventually resort to violence or threats of violence to advance their agenda.

Blondie, you do realize that there’s enough of your face to recognize? Your parents must be so proud.

“And to make matters worse, some white nationalist clowns showed up to help.”

Can’t help believing that Soros is funding such fake groups for such fake clashes.

Or is this extremely speculative?

“While chanting a Nazi slogans

What was the slogan? Odd that the media left that out. Why leave that out?

1) I am at a point where I don’t trust any media reports anymore. They believe MAGA is a Nazi slogan.

2) OTH, if true, I’m left in the uncomfortable position of supporting the only people willing yo stand up and actually fight the violent Marxist Left.

Job 1, don’t trust media reports in this area of coverage. Your second observation comes about when the “wrong people” happen to be right about the “right” people.

In the potentially topsy-turvy world of Weimar-USA “Brown” may be the new “red, white and blue”. The risk is that the Right gets as comfortable as the Left is With proxy street warfare.

So…. what is the status of Court case In Charlottesville with the vehicular manslaugther case and the Feds report of their investigation ,including video, of the riot? Or is DOJ embargoing everything?

These incidents cause me to reflect on the street battles of Weimar Germany in a new light. It becomes clearer why people decided they had to take to the streets when confronted with communist thuggery.

People who carry around large logo banners, wear matching outfits, cover their faces, and violently demonstrate remind me of certain political groups of the past. I just can’t remember what they were called…

No one is required to listen and no extra credit is offered like it is for participating in a protest. If they don’t want to hear it, go to a local bar and get drunk like they do most nights.

In addition to extra credits ‘some’ schools are offering pay to participate in these riots. They however call these riots peaceful demonstrations and Obamaesque Community Organizing.

That NAZI stuff has all the ear marks of Fake News. Anonymous sources, no direct quotes, vague identifiers. Fake News. A complete fabrication.

“a risk of an imminent threat of potential violence”

Wow, if it gets any more serious than that it could approach “emanations of penumbras” levels.

First off, it’s just as likely this is another leftist hoax meant to drum up sympathy for them, or show that they’re “relevant.” We should not take for granted that the clash was real.

Secondly, if the mere presence of Antifa is an incitement to riot then they should be banned from campuses as an imminent threat. You know, exactly the same rationale the left uses for banning speakers.

Yeah, I’d like to have information on exactly who the “nazis” are. They might really be white nationalists — although why they’d turn out in support of a speaker promoting “fiscal responsibility, free markets and limited government” is unclear. If they are “white nationalists,” presumably they showed up because Antifa thugs were there. Neither the Antifa thugs nor the other thugs seem to have any concept of what the speaker actually supports.

For example, some masked nitwit in Antifa is the last person I would trust to judge if someone is a fascist.

Can Charles Kirk really be called an “activist”? I think of him and Turning Point as advocates, not activist.