And yet, she persists. 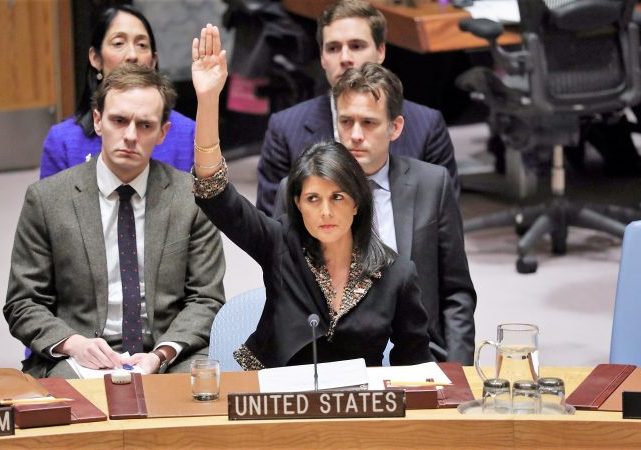 Nikki Haley’s strong support for Israel at the U.N. has been one of the highlights of Trump foreign policy.

“The Jewish people are a patient people. Throughout three thousand years of civilization, foreign conquest, exile, and return, Jerusalem has remained their spiritual home. For nearly 70 years, the city of Jerusalem has been the capital of the State of Israel, despite many attempts by others to deny that reality.

The UN has done much more to damage the prospects for Middle East peace than to advance them. We will not be a party to that. The United States no longer stands by when Israel is unfairly attacked in the United Nations. And the United States will not be lectured to by countries that lack any credibility when it comes to treating both Israelis and Palestinians fairly.”

Saeb Erekat, a senior Palestinian negotiator and Secretary-General of the PLO executive committee , is a major league blow-hard. Erekat recently underwent a lung transplant at a hospital in Fairfax, Virginia, after undergoing 5 years of treatment in Israel. 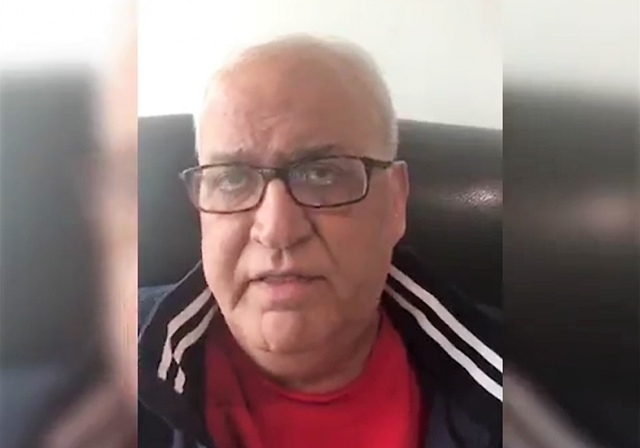 Erekat apparently regained lung capacity because he has been huffing and puffing about retaliation for months, after the U.S. threatened to close the PLO office in D.C.

And now he’s lashing out directly at Haley, as The Times of Israel reports:

Senior Palestinian official Saeb Erekat on Saturday accused the Trump administration of trying depose the Palestinian leadership in a “coup” and told the “impudent” US envoy to the United Nations Nikki Haley she should “shut up” with her criticism of Palestinian Authority President Mahmoud Abbas.

Erekat, who has led the Palestinian peace negotiations and is secretary general of the Palestine Liberation Organization, singled out Haley, who slammed Abbas for a recent speech that was full of anti-Semitic tropes….

Erekat insisted that Trump’s recognition of Jerusalem as the capital of Israel, together with Haley’s remarks, amounted to an attempt to stage a “coup” against the “Palestinian political system.”

“Nikki Haley needs to shut up and realize that the Palestinian leadership is not the problem,” the top PLO official added. “Instead, the problem is the Israeli occupation and the policies it continues to pursue. I’m not saying that we don’t make mistakes; every society and every government makes mistakes.”

Somehow, I don’t think telling Nikki Haley, and by extension Trump, to shut up is going to work.

Erekat better watch out , Nikki claws are long and sharp

“Nikki Haley needs to shut up and realize that the Palestinian leadership is not the problem,” the top PLO official added.
—–
Now on this point I would agree. The problem is Islam, Islam, and Islam.

Are those the top three reasons in order of importance?

Very nice and elusive to blame it all on Islam (one of the stupidest, backward and dangerous ideologies ever invented). But let’s not imagine that we are all clean in this matter. The others are bad and we are clean! That’s a dangerous and unproductive way of thinking, if you can even call it thinking instead of an ideology on its own. The Palestinians do have some legitimate concerns. And if the response to them is how much you are hurting and how much they have hurt you, you are avoiding the issue, and have gone back to the thinking me-good, them-bad.

But for the Israeli and U.S. health-care systems it’s unlikely that Erekat would be alive today. So, where’s his gratitude?

There will never be any gratitude. Muslims, following their Qur’an*, expect that the kafir (the non-Muslim) will provide for the Muslim.

Interesting how “kaffir” is also an ethnic slur used to refer to a black person. Oops.
https://en.wikipedia.org/wiki/Kaffir_(racial_term)

Kafir is a Muslim term, kaffir refers to a Black African (derogatory). I get them confused also.

I’ve read that it’s also the muslim word for ‘slave’.

She does persist 🙂
I guess the truth hurts so you’re just left with “Shut up”? Different than “You’re racist”.
You just lost the rest of your free lunch from the U.S. 🙂

Well. This guy sounds like one smooth negotiator, doesn’t he?

I’m so tired of our diplomats pretending that rolling over and throwing our allies under the bus is some kind of sophisticated tactic.

Erekat is used to obama betraying the United States, and dealing at the UN with another traitor, samantha power.

This al sharpton clone has his grubby hands full with Trump and Haley. He might even have trouble with a drone one of these days.

I can’t wait for Haley’s response, if she even decides to grace this idiot with one.

And yet, she persists.

Actually not dot either. She was raised Sikh (which may explain her affinity for Jews, since the two religions are more similar to each other than to any other one).

“Erekat recently underwent a lung transplant at a hospital in Fairfax, Virginia, after undergoing 5 years of treatment in Israel.”

Why do we allow this?

It’s time to cut off all medical treatment for the PLO and even Europe. They have world class systems according to them. Let them use their own system.

This guy should have been forced to use an obamacare doctor at in some rathole hospital in baltimore.

It would seem the brain transplant is not working.

for a loooong time I have been pi$$ed about Israel treating their enemies in hospital – cost free.
the Jizyah comment explains the expectation by the
Mooo-Slimes –
but what is the explanation from the Israeli POV ?

in northern Israel the Jewish State treats Syrian and Lebanese
also –
scratching my head, maybe there are reasons but ……

The reason is simple humanity. When people need help you don’t stop to ask their politics.

Erekat is another story; if I were the administrator of the hospital that treated him I’d have turned him away.

The Sanction of the Victim.

So he’s supposed to be the head of the Palestinian NAZI Party. I remember when Arafat was being trained in Lebanon by Mohammed Amin al-Husseini the Grand Mufti who was part of HItlers Regime.

1. Amin Husseini was not part of Hitler’s regime. He was an ally of Hitler, and visited him as an honored guest, but he was not German and played no part in the government of Germany.

The Palestinians negotiate…poorly. They don’t realize they are now a sideshow. Their former Arab allies have far larger problems with Iran and its terrorist proxy, Hezbollah, and Israel is a natural ally. Who else in the region can deliver a hydrogen bomb (disclosed by Obama) to Iran? Saudis can’t. Gulf States can’t.

They’re not used to negotiating. Anything they’ve achieved, they’ve extorted by violence, or had given to them by American traitors like obama/jarrett/kerry/power.

Late to the game here, but I agree with Mr Jacobson completely on all points.

I am sure John F’n Kerry’s encouragement had nothing to do with Erekat’s public attitude.

I don’t quite understand why anyone is even paying attention to this ridiculous buffoon. Erekat is the ultimate useless clown, proferring one ridiculously gross lie after another during his entire career, or whatever stands for it. All the while, he’s been plundering the PLO treasury as Arafat and Abbas have been doing all these years, at the expense of US taxpayer money! He alone epitomizes why the US must cut all funding to the Palestinians, cut all ties with them and expel their pseudo diplomatic representation in Washington DC. They are a fraud through and through, as Erekat keeps proving day in and day out.

The problem from the beginning was the leadership of the surrounding Arab nations. They lost the war in which they promised to eject the Jews, and they have kept these Arab “refugees” penned up in cages ever since. “Palestinians” have been the pawns of the surrounding nations, and of their own “leaders,” for my entire life.

” …and they have kept these Arab “refugees” penned up in cages ever since. ”

Scroll down to get to the interesting part.
” The Quote
On 25 May 1953 in testimony before the Subcommittee on Near East and Africa of the Senate Foreign Relations Committee the Reverend Karl Baehr, Executive Secretary of the American Christian Palestine Committee stated:

Arab leaders don’t give a damn whether the refugees live or die.
”

” • Why do Palestinians in Gaza still live in refugee camps? Did the Israelis force Palestinians to stay in the squalid, overcrowded camps?

…
What is perhaps surprising is that the United Nations also opposed the program, and passed harsh resolutions demanding that Israel remove the Palestinians from their new homes and return them to the squalid camps. For example, UN General Assembly Resolution 31/15 of Nov. 23, 1976:

Calls once more upon Israel:

(a) To take effective steps immediately for the return of the refugees concerned to the camps from which they were removed in the Gaza Strip and to provide adequate shelters for their accommodation;

(b) To desist from further removal of refuges and destruction of their shelters.

measures to resettle Palestinian refugees in the Gaza Strip away from their homes and property from which they were displaced constitute a violation of their inalienable right to return;

1. Calls once more upon Israel to desist from removal and resettlement of Palestinian refugees in the Gaza Strip and from destruction of their shelters;

Perhaps thanks to this support from the UN, the PLO began threatening to kill any refugee who would move out of the camps. After a few such attacks, the build-your-own-home program died, and that is why there are still Palestinians refugee camps in Gaza.
“

It has been my experience that however “shut up” is said it’s still a rather weak retort.

You’ve probably never experienced it backed up by a gun.

Erekat has always been a douche.

Caroline Glick is of course correct: there is no two-State “solution” and the U.S. should walk away from the PLO/Fatah/P.A. farce.

There never has been a two-state solution, but you have to understand why so many people refuse to accept that. It’s because they operate on the deep-seated assumption that if Israel were to annex the territories it would have to give automatic citizenship to their Arab residents. Since that’s unacceptable to anyone, you can see how two states seems to be the only possible solution, and therefore the one everyone must work at no matter how unlikely it seems. The only alternatives depend on being willing to ditch that assumption.

She is awfully pretty when she is angry. LOL

She ought to tell him “If I want your opinion, I’ll read it in your entrails.”