The end of viral news? IJR sees another wave of layoffs and Buzzfeed’s traffic troubles

The end of viral news? IJR sees another wave of layoffs and Buzzfeed’s traffic troubles

Readers are taking their clicks to traditional media publications

IJR was already working with a skeleton staff before Thursday’s layoffs.

The Independent Journal Review (IJR) terminated a number of its employees on Thursday, leaving an unclear future for the millennial-focused conservative website that has recently faced a declining audience and internal strife, several employees told The Daily Caller News Foundation.

Employees received notice about their termination Thursday morning via email, according to multiple recently laid-off IJR staffers. Another source inside the company told TheDCNF a total of 15 positions were terminated — a massive blow to the already skeleton staff.

A number of veteran employees were also allegedly included in the mass layoffs. One source said that eliminations hit virtually every department at the company.

Fired IJR employees who spoke to TheDCNF on the condition of anonymity say there was no indication the layoffs were coming.

A new kid on the conservative media block IJR made waves with their viral content, some of which we shared here at LI. Their model relied heavily on Facebook sharing. Early on, and back in the days when clickbait was all the rage, the site “cracked” Facebook’s algorithm, garnering unbelievable amounts of traffic as a result. The site still describes itself as, “a social first, mobile first news company serving millions of Americans each day with shareable, informative and mobile friendly content.”

Social media algorithm changes and having a Republican in the oval office have inflicted wounds on many a right-leaning web publication since November of 2016: 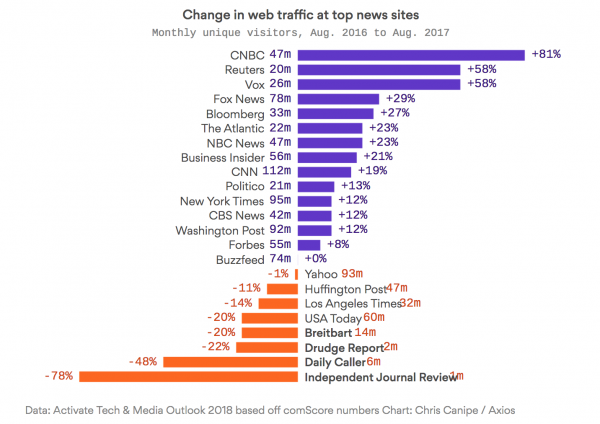 But that’s the trouble with creating a business that relies wholly upon a separate, independent business model remaining completely static.

IJR is not alone in their struggle to acquire clicks through social media channels, Buzzfeed, another site whose hallmark is (or was) viral content, has failed to reach their web traffic goals (read also: ad revenue goals) and is suffering from a steady decline in page views since its heyday just a few years ago.

…but BuzzFeed has seen its web traffic decline.

The company announced layoffs yesterday after missing revenue targets. A rep for BuzzFeed, which has long focused its business on advertising that travels across the web on sites like Facebook — but is increasingly trying to generate revenue from its own site — said the layoffs are “completely unrelated” and that its audience is “a major asset.”

Facebook’s metamorphosis into a pay to play outfit for publishers, coupled with their fake news problems during the 2016 election cycle has created a distrust of news shared on the social media behemoth. As a result, readers are taking their clicks to so-called legacy publications like The New York Times and The Washington Post.

“You won’t believe what happened when this ladybug landed on a window!” type headlines had a finite shelf life. They were a fun soiree into a different medium of publication, and an interesting experiment in human curiosity, but in the end, traditional news delivery wins. For now, anyway.

Personally, I never go directly to the NYT or WaPo. The only way I end up visiting those sites is through news aggregators like Drudge or Instapundit.

Transparent snark to bite the hand that allows you comment space. Pointless comments are not a sign of mental wellness, kid.

It’s pointing out the obvious…that the idiots here who stomp around saying all things Mushroom Media are lies can’t think.

We all use MSM reporting. A LOT of the original reporting on various things is done by solid reporting, and we all use it.

You can see it here almost every day. And I’ve noted it before.

I find you a disgusting puke troll.

That’s Okay. Even The New Yorker is covering Trump’s infidelities and attempts to suppress the reporting of them. Donald Trump, a Playboy Model, and a System for Concealing Infidelity

Damn, you escaped again. But the men with the nets will find you, just like last time.

“IJR is not alone in their struggle to acquire clicks through social media channels, Buzzfeed, another site whose hallmark is (or was) viral content, has failed to reach their web traffic goals…”

I’m the father of Genxers & Mills, but I’m also a web savvy guy who really likes technology. Obviously, I’m not the target audience of IJR, yet while I’ve heard of Buzzfeed (though never frequent the joint), I’ve never heard of IJR until I read this post.

I guess their roots or their reach didn’t go very far.

The internet model has always been dynamic and tended more towards fads or whims than something more established. When you are tied to social media for primary traffic, that is especially true. By design, Facebook and Twitter users are steadily changing habits. Today’s popular hashtag is just that, today’s fad. Tomorrow is different.

Same with sources. Especially as we polarize even more. The decrease in traffic redirected from social media to places like IJR and Buzzfeed are likely at least somewhat due to partisans recognizing the source and consciously refusing to click now. That is a trend that is growing, in my opinion. I am guilty, too. If I know a link goes to CNN, for example, I don’t click. I mouse over every link anymore, too, to see the source.

notamemberofanyorganizedpolicital in reply to casualobserver. | February 17, 2018 at 1:00 pm

The younger users of Facebook started dumping it about 5-7 years back.

” Readers are taking their clicks to traditional media publications ”

Doesn’t say much for their discernment of news.

notamemberofanyorganizedpolicital in reply to Vascaino. | February 17, 2018 at 1:00 pm

Also, if you’re gonna be one of those shallow heuristic aggregators, maybe not such a good strategy to rely on referrals from people who extract their revenue the same way. They become the de-facto landing page, and see no reason to pass the harvest on to you. With more money, presence and reach, you’re gonna get beat.

Curation is another thing, stable as a model, and rare in the InterWebz. TheBlogfather (Instapundit) Our Kind Hosts (LegalInsurraction) and a few others like Drudge have that down in politics and culture. It’s why SlashDot has never yet died, while Wired has morphed, especially the bolgs. The curation itself has value. The elements of the fleet that includes Twitchy and HotAir all manage to find blended sweet spots balancing “track the zeitgeist”, “curate the flood”, and “content with a perspective”, interestingly at least three different sweet spots among them.

It’s a problem as old as AOL (or Compuserve, or Prodigy, or Delphi (the connection one) or the early, early pure-access offers): how do you be the landing page to the content on the internet that isn’t your? It’s no accident that every access provider with aspirations of becoming a “media company” provides their own “home page” and defaults your access to start in their world. (And why wouldn’t service company overlords prefer being a media company – career influence over dewy starlets vs. cable install technicians, and you don’t have to wrangle all that infrastructure and capital.)

Good primary content, and curation to find the good stuff are both values that you can’t duplicate with a slightly larger server farm running a little more bad PHP. Maybe do that.

Define traditional media. I think the article’s conclusion is too simplistic. You have to factor in the fact that Facebook/social media has an interest in being able to direct traffic to desired locations for the control thus money it provides them. There is no benefit to Fakebook when great sites, (like Legal Insurrection) organically get great traffic without paying for it, (especially if it doesn’t support their world view). It’s not much different than a large corporation buying up better products or disruptive technology that would hurt profits and simply putting them on a shelf.

If we are taking “more” clicks to the NYT I think it is because more people are directed there and the remaining clicks are spread out across the internet. It’s a shame, because it makes it much harder for a smaller business model to pay to generate content.