Another Stockton student was arrested for planning a school shooting. 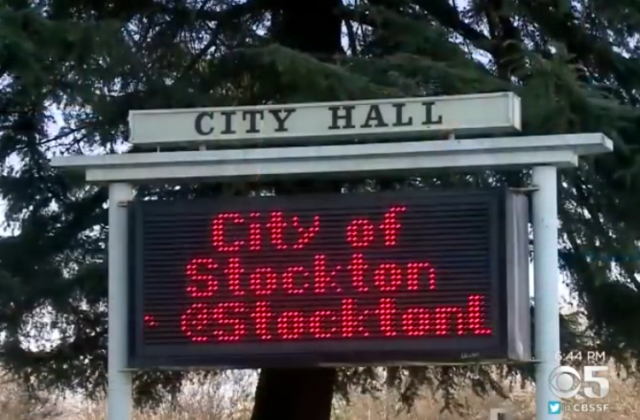 The last time we visited Stockton, California, the city was gearing up to test “Universal Basic Income“.

Let it not be said that the municipality’s insanity is confined to fiscal matters. The educational system has a heavy emphasis on social justice, so it is little wonder that hundreds of the area’s school students turned out for anti-gun protests.

At least five students were arrested Friday as hundreds of others from several Stockton high schools walked out of classes in protest of gun violence after last week’s deadly shooting at a Florida high school.

Students at Stagg, Edison, Chavez, Lincoln and Village Oak high schools were walking along streets, creating traffic problems in the area as streets were blocked off.

Five arrests were made, including charges of battery on an officer, resisting arrest, taking an officer’s baton and vandalizing vehicles, including patrol vehicles, Stockton police said.

It will be interesting to see how anti-gun activists tie the rock throwing to the National Rifle Association.

Also, 14-year-old Stockton student was arrested after school personnel discovered that he was planning a shooting at his school.

Venture Academy staff called officers Monday around 8:40 a.m. to report that a 14-year-old student had planned on committing a school shooting.

Parents of students got a voicemail about the threat Monday afternoon, around five hours after police began investigating the threat.

…The 14-year-old had written down plans for the shooting, according to Officer Joe Silva with the Stockton Police Department.

The student was already detained by staff when officers arrived at Venture Academy and he was later booked into the San Joaquin County Juvenile Hall on suspicion of making terrorist threats.

Another walkout is planned on April 20, which will mark the 19th year since the Columbine High School massacre in Colorado that left 13 dead. Perhaps California’s students would be better served if their educators focused on academics and student safety instead of politics, and passed on the April event.

But, given the history of the Stockton area, I anticipate more progerssive protest antics will ensue.

“It will be interesting to see how anti-gun activists tie the rock throwing to the National Rifle Association.”

Methinks this ‘anti-gun protest’ was simply a pretext for many of these junior antifa wannabees to scoot farther down the mythical ‘school-to-prison pipeline,’ and raise some hell.

I bet the mugshots are interesting.

We need common sense Rock Control.
Keep rocks out of the hands of irresponsible people.

Some good food for thought……

“Media Mocks Trump For Saying He’d Rush Unarmed to Stop Armed Assault; But They Forget That Time He Did Intervene Unarmed to Stop an Armed Assault”
…..
“I suppose Stephen Colbert, Jimmy Kimmel, and Trevor Noah would not do likewise, and know that about themselves, and therefore find the idea that anyone else would to be just some kind of fantasy, like the idea that an armed citizen could ever be courageous and cool-headed enough to stop a violent crime by using or threatening to use his gun.

And that’s because they’re narcissists, of course, as many progs and wannabe TV evangelists are: If I can’t/wouldn’t do it, no one can or would do it, and therefore, it shouldn’t be done at all.

That’s 99% of the reason for the gun-control frenzy: Many people just don’t want the heavy moral responsibility of carrying a gun and being responsible for protecting their own lives and their loved one’s lives (and possibly for taking the life of someone threatening those lives), and therefore think that no one else should volunteer to bear that moral responsibility.”
…..

TheFineReport.com in reply to notamemberofanyorganizedpolicital. | February 28, 2018 at 6:46 pm

He’s done it before:

Was that supposed to be sarcasm? Just asking for a friend. Anyway,, TY for the heads up… This was not on any news that I have seen today..

It would be nice to see some of these people actually prosecuted.

Stockton, California reminds me an awful lot of the Demotivator Poster: “it could be that the purpose of your life is only to serve as a warning for others.”

It’s worse. We are going to see armed insurrection in the streets, courtesy of Soros and clinton money:

Snide, snarky bullschiff. Unbefitting an American. We all should be on the same team. It’s important.

You know, during the middle years of the federal “assault weapons” ban.

We ought not blame this perfect group of social justice warriors for this – they we’re trying desperately to create a safe space so their voices could be heard and the appearance of the radical, most likely militants and facist, police triggered them.

I’m curious, this being a lawyer-ly site and all, if I don’t walk out of class in protest of gun violence, does that mean that I am FOR gun violence?

These kids have no idea what they’re doing: just like the kids in colleges getting brainwashed while we sit by and do nothing.

Hang onto your Second Amendment right as if our leftist schools and Soros/clinton money are creating an army with which to enslave you.

My wife teaches 1st grade, my daughter works in a school with special needs kids, my DIL is a bookkeeper in a grammar school. All of them deal with out of control kids every day. No matter what the kids do, hitting other kids, throwing desks, hitting the teaches, using foul language, they are not allowed to touch the kids even to restrain them. At the school, my DIL works at a 3rd grader ran away yesterday, climbed a 6′ fence, ran across roads, etc. with a teacher right behind him. She was not allowed to stop him from climbing the fence or running across roads. Eventually, she fell and broke her ankle.
The police finally caught the kid and brought him to the school office where he sat for 60 seconds before taking off again. His mother did not want to come to the school and when she did it was 4 hours later.
There are no consequences for these kids or their parents. They will grow up to be even worse than this current group of immature HS and college children.

Q: What’s one of the most dangerous things you can do in California?

A: Get anywhere near an “anti-violence” march.

To me the most interesting part was that the protests inspired a child to give a credible threat to become a shooter. The media has made it chic. Cruz did not die and now he’s infamous to deranged lefties because he really stuck it to those gun-toting bible Trumpers.

LOL! Girl, you are twisted! He wasn’t inspired by Parkland; he was inspired by the demonstration. Any proof? Any proof at all? Another, rational way, to look at this is the students reported him and the Stockton Police acted with dispatch.

So far, it does not appear that the kid had access to a weapon. That would seem to be the most salient fact concerning where the next mass shooting will occur.

BTW, I ran across a study with ammunition (pardon the pun) for both sides. I am inferring that the study, if not the organization, seems to be impartial. They offer the following on mass shootings by FBI definition 01/2009 – 07/2015:

Just for the record, Elle, I am very, very, upset by the possibly of fish drowning in the ocean. So, I resent you claiming that I don’t have feelings. But you make up anything else your pretty little mind can think up about me. Don’t you worry about logic or facts. They aren’t for girls.

BTW, I ran across a study with ammunition (pardon the pun) for both sides. I am inferring that the study, if not the organization, seems to be impartial.

The sad thing is you’re not joking. Any “study” conducted by EveryTown is by definition partial, unreliable, and must be presumed dishonest.

“So far, it does not appear that the kid had access to a weapon. That would seem to be the most salient fact concerning where the next mass shooting will occur.”

No access to a weapon? I guess there were no wars or murder before guns were invented. I get that you don’t care if he gets a car and plows into people. To you, it’s only a meaningful death if the weapon used is a gun, so you can gloat about how enlightened you are.

Funny, you mentioned all the meaningful controls on cars, and yet so many more die from cars. How is that? Hmmm.

“They aren’t for girls.” Not only do you not care about the deaths of children, but also a misogynist. You are so uncool.

Again, congratulations on your promotion.

there is no place any longer for ‘kids’ to grow and responsible
adults.

Years ago these ‘kids’ could enlist in the army – but the army needs people with at least a good HS education.
the weaponry is complicated and gomer pyle is not a good candidate.

Cut federal funding to leftist schools not teaching ABCs. (Give standardized tests, to ensure it.)

Re-istate the draft: make men and women out of narcissists.

Get rid of Sessions so the likes of klinton and obama and soros can be exposed for the criminals they are.

I’m scratching my head on this; can Dick’s Sporting Goods legally refuse to sell firearms to younger customers who are otherwise legally entitled to purchase them?

Yes, of course. Any market exchange is an agreement between two (generally) willing participants on mutually agreeable conditions.

I’m betting the market will discipline Dick’s…and far better and more subtly than any law could.

For what it’s worth people, this is Stockton. No surprise at all there was violence. Locally it has quite the reputation. Situational awareness at all times is wise when visiting.

All eyes turn to Soros.

Sessions’s eyes should be turning that way, too.

Trump needs to can Sessions asap.

Who was it that said these “protests would turn violent?
Oh yeah…it was me a couple days ago.

Although Stevie Wonder could’ve seen see this one coming.

Enough with the provincial anti-Stockton comments, which more often than not are steeped in racism. The kids here can be misled just like they can anywhere else. I’ve lived a nice, quiet, productive life here and raised 3 children who have successful careers. This city is not without its problems, like most cities. If you are looking for trouble, you can find it here, like most cities. If you are looking to live a peaceful life, you can find that here, as well.

This is the very reason folks will never give up the rights to protect. Idiotd like this would be attacking people if they knew they had no way of protecting themselves.

The reason for the April 20th walkout is because they plan on smoking dope all day – it’s the unofficial holiday for marijuana smokers.