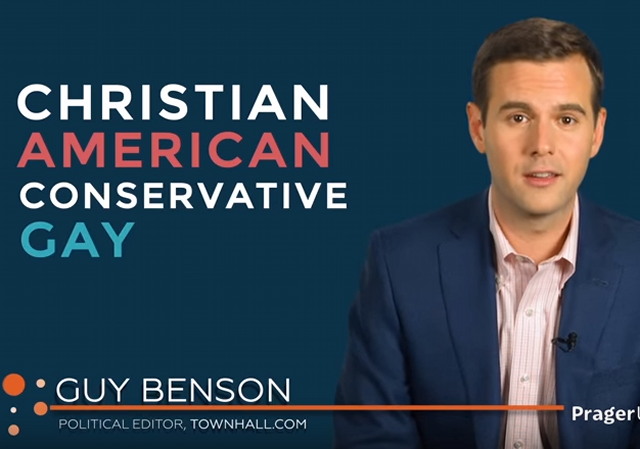 A group of left wing students at Brown tried to prevent conservative commentator Guy Benson from speaking on campus last night claiming it was a violation of community standards. Luckily, the speech went on as planned.

Guy Benson turned heads recently when he appeared in a PragerU video titled “I’m gay … conservative … so what?”

The Fox News contributor and Townhall.com political editor also noted his Christian faith, arguing that his sexual orientation does not dictate his other beliefs, which include fiscal conservatism and support for small government.

They wrote an open letter in the campus feminist magazine Bluestockings – known for publishing a hoax rape accusation – that alleges Benson’s talk amounts to prohibited “behavior that is intended to or can reasonably be expected to result in significant emotional or psychological harm.”

Here’s part of the absurd letter the students wrote:

There is a wealth of writing on the inextricable connection between Benson’s ideologies — fiscal conservatism and free market ideology — and real, tangible, state violence against marginalized communities. Such thinking is fundamentally at odds with any intention to pursue real justice for structurally and historically marginalized people. Arguments like Benson’s enable white supremacist and fascist ideas to fester and flourish by defending the speech of already empowered people over and above any concern for justice or histories of violence. …

Here’s a video Benson recently did for Prager University:

Here we go. Now they don’t have to accuse you of actually being a white supremacist or fascist, they can accuse you of ENABLING them.

‘violates community standards’, “behavior that is intended to or can reasonably be expected to result in significant emotional or psychological harm.”

In other words ANY speech that counters ANYTHING we think WILL result in our being triggered. So if just one person is offended then it’s harassment of the whole.

This isn’t surprising. That said, I would point out that it is impossible to be both a Christian and a professed homosexual, as that lifestyle is explicitly condemned in the Christian holy book. So this guy’s contradicting himself before he even starts talking.

Do you labor on Sunday?
Do you eat shellfish?
Do you wear cotton/wool blend clothing?
Those are just a few holy book prohibitions that many (or most) self-described Christians don’t follow.

Heck, you can be a Christian and a sinner both – perfection may be the goal but the attainment thereof…… Not unexpected to fall short.

If sinning makes you not a Christian, no one is a Christian short of the Big Guy himself.

And when you disagree over what is or is not a sin, it gets even more hair-split-ery.
The Southern Baptists vs. The Methodists vs. The Catholics vs. The And so on and so on.

The Islamics spend a hell of a lot of effort and blood killing “heretics” who are not “True Muslims”.
The Christians USED to do that a lot too, but more recently even “The Troubles” used religious versions as an excuse more than as a reason, and even there they’ve stopped the insanity.

Let’s not return to the 14th century ourselves, I think.

Bob,
I’m not trying to turn this into a theological dispute, but I’d like to reply to your points.
For the record, I’m not a believer myself, though I was raised as one.
First, the three prohibitions you mentioned are all from the old testament; none of them are banned under the new covenant. Your point, though is none the less valid; there are many so called Christians who live in violation of the Bible. For instance, remarriage after being divorced is practicing adultery, according to the new testament. Many try to explain it away and get around it, but it’s there in black and white. The same goes for homosexuality.
Sure, even the Bible itself accepts that Christians will fall into sin. But that’s different from deliberately, consistently, unapologetically living in sin, which is the impression I get from a guy whose calling card is Christian. American. Conservative. Gay. That strikes me as being proud of it.
As I said, I’m not a believer, so it’s really neither here nor there to me; but it certainly is hypocritical of him.