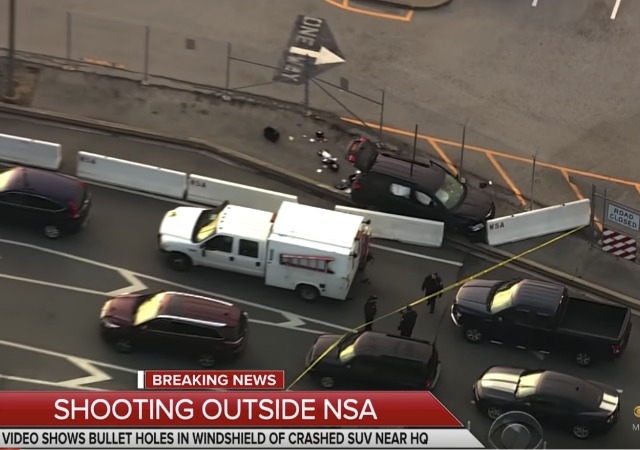 Authorities have taken a suspect in custody after a shooting at the NSA complex this morning in Fort Meade, MD.

The FBI does not believe this is terrorism, but authorities do not have a motive. The driver is in the hospital while officials have two men in custody who were with the driver.

The shooting injured three people: NSA officer, civilian, and the SUV driver. None of them have life threatening injuries. The FBI’s Baltimore office has responded to the incident. The NSA said that the “situation is under control and there’s no ongoing security or safety threat.”

The shooting happened near the military installation’s gate off of Route 32 at Canine Road around 7:15 a.m. Wednesday.

Aerial images from SkyFOX show a black SUV with heavy body damage that apparently crashed into white security barriers near the gate. The force of the crash pushed one of the security barriers into a fence. Bullet holes could be seen in the windshield of the SUV.

Route 32 near the base is closed in both directions at this time. School buses traveling in the area may experience delays.

The FBI has said that they do not believe this incident is terrorism. WTOP reported that officials said that those inside the car targeted the NSA and that it is “not clear whether they were running from local police.” Either way they ended up at the complex and crashed through the gate. From NBC News:

“We don’t believe there is an nexus to terrorism, we believe this was an isolated incident,” [FBI Special Agent in Charge Gordon] Johnson said. “We are still trying to figure out why they were there.”

The driver of the vehicle, an NSA police officer and a civilian who happened to be at Security Gate 1 when the shooting started were hospitalized, Johnson said.

“At this point we don’t believe any of the injuries were the result of gunfire,” he said.

President Donald Trump received a briefing on the situation:

“The President has been briefed on the shooting at Ft. Meade. Our thoughts and prayers are with everyone that has been affected. We will continue to provide updates as they become available,” [White House spokeswoman Lindsay] Walters said.

#BREAKING: @Chopper4Brad over the scene of an apparent shooting at the entrance of the NSA. At least one suspect appears to be taken into custody. pic.twitter.com/ptMpwkubGE

No mention of the shooters’ religion will be mentioned on any of the major TV networks today. Probably not tomorrow, either.

Nor his race, national origin, or political affiliation…

… unless he turns out to be a white, American-born, conservative/libertarian Christian.

Then it will be all over the media.

notamemberofanyorganizedpolicital in reply to Archer. | February 14, 2018 at 4:14 pm

“A couple of transgendereds were doing meth with a certain gentleman in a hotel in Maryland. When he passed out, they stole his SUV and rammed it through the gates of the NSA, where one of them was shot to death.

Will this be counted as a transphobic hate crime when the SPLC cooks up their annual batch of statistics?”

“Two men dressed as women who were shot at trying to ram entrance to NSA, killing one, had ‘stolen SUV from hotel they had been partying at hours”

Considering what the Deep State has been up to, the attacker could’ve been a normal American who was just fed up. We’ll have to wait and see.

Going in through the front gate of the NSA shooting does not seem to me as a well thought out plan. However this type of attack is not one that is unheard of in my recollection. Was this an attack on the gate to gain entry? That is insane. Was this an attempt to get someone while they were entering the facility and failed because they were intercepted? I have my eyes peeled for the details which may or may not be readily available in the near future.

I don’t know why any Muslims would be mad at the NSA. Constitution and liberty-loving Americans on the other hand are a different story. Reminds me of that guy in 2010 who flew his plane into an IRS building in Texas.

So apparently it’s being reported that this SUV was ALREADY running from police, and they made the brilliant decision to take this turnoff in an attempt to shake them.

Michelle and Chelsea Manning just having a girls night out.