So much for that whole improving credibility thing. 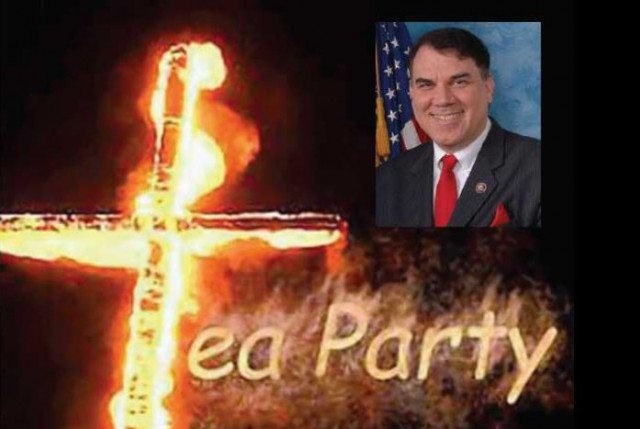 Politifact, the site that pretends to be a non-biased, non-partisan fact checker, really stepped in it Thursday.

In an attempt to bolster credibility, Politifact brought on a Republican and a Democrat to “critique” their work and “improve the trust and credibility.” They selected former Florida Congressman Alan Grayson to be their Democrat representative.

Grayson has a long, nasty, history of over the top vitriol.

He once sent an email using a burning cross to compare the Tea Party to the KKK (then doubled down on it). During the Obamacare debates, Grayson used time on the floor to claim “Republicans want you to die.” Later, Grayson’s campaign ran an ad calling his opponent “Taliban Dan Webster” and suggested his opponent (a staunch Christian) was trying to impose religious fundamentalism in central Florida.

Needless to say, Grayson is no run of the mill Democrat when it comes to equanimity or objectivity.

No sooner did Politifact announce they were bringing on Grayson than the internet revolted. Leading Politifact to terminate whatever arrangement they had with the former Congressman:

We sought out a Democrat and Republican to critique our work in order to try to improve the trust and credibility in fact-checking and PolitiFact. It has become clear our choice of Alan Grayson did not meet that threshold to many. pic.twitter.com/uJuoHhiObI

We called Alan a short while ago and informed him that we would be canceling our agreement for him to write on PolitiFact. We remain committed to this experiment, however, and will be seeking out a Democrat to replace Alan. If you have a good suggestion, please reach out.

How could Politifact not have known or been aware of Graysons reputation for being nasty as all get out?

Do not trust anyone as the arbiter of truth simply because they have Fact Check in their header.

Trust me, I’m a Fact Checker.

Also, get your own Fact Check Header [tm] NOW at Wal-Mart for only $4.99 while supplies last.

They don’t simply declare themselves fact checkers. They write reasoned arguments with, get this: FACTS.

Now considering that Trump has admitted, including under oath, that he is not truthful and considering that he contradicts himself (sometimes in the same sentence), it is likely that you will not like what fact checkers conclude.

They, unlike you, attempt to be non-partisan and objective. They may not be perfect, but they try to establish the truth without first asking ‘what does my ideology require me to think?’ or in Trump’s case ‘what do I need to say to make my marks happy?’.

You can find apologists and revisionists on the web. But the church was wrong. They did force Galileo to recant.

First of all, Politifact and its competitors did, in fact, gain their position simply by declaring themselves to be fact-checkers. They did not earn the public trust over time, by writing reasoned articles; they simply asserted that they were the arbiters of truth and falsity, and the stupid public bought it. Whether you like it or not, that is the way it happened.

Second, the Roman church never required anyone to believe in geocentrism. Copernicus was and remained a respected churchman, and the Church not merely tolerated but admired his theories, so long as they remained just that. Galileo’s offense was to assert — contrary to the overwhelming weight of the scientific evidence available at the time, as well as contrary to the consensus of scientists — that heliocentrism was not just a theory but a fact.

Worse than this, he proposed reinterpreting the Bible to accommodate this supposed fact. As Cardinal Bellarmine told him at his trial, there are only two sources of truth: science and the Bible. If there appears to be a contradiction between them we must have misunderstood one or both, and we must seek a better understanding. If heliocentrism should ever be proved, Bellarmine said, the Church would very easily and willingly reinterpret the Bible. But in the absence of such a proof it would not, and Galileo was neither authorized nor qualified to offer his own interpretations.

Galileo’s recantation of his certainty in a theory he could not prove, and could not defend against all the evidence against it, was the scientifically honest thing to do. His claim had been unscientific and unworthy of him. He remained free to continue teaching heliocentrism, as a theory.

The whole Galileo vs The Church thing is usually misinterpreted the way you are doing it, but you might want to fact-check it sometime yourself.

Firstly, his trouble was largely his own doing, as Milhouse said he argued for the sun being the center of the universe as if he had incontrovertible proof – which of course he didn’t – especially as (we now realize) neither the earth nor the sun is any such thing.

Granted the heliocentric view is arguably more nearly correct, but more nearly and actually are not the same.

Then he followed that arrogance with a written straw-man-type publication which featured a thinly-veiled pro-earth-centric protaganist modeled after the sitting pope with a name the Latin equivalent of naming someone “John J. Idiot” in English.

If you’re going to propose controversial astronomy theories and models in nth century Italy, it might be more convincing and less controversial if you don’t immediately jump to extrapolating how this should alter theology (not your field) and use ad hominem arguments to attack any one with opposing views instead of logic and facts – including the actual frick in’ POPE.

Yeah, Galileo had some astronomic chops, but he was also a bit of a self-destructive ass.

A) a Democrat changes his views
FACT-CHECKER: His views are evolving.

B) a Republican changes his views
FACT-CHECKER: He is a despicable liar.

Well, at least they realized their error. Who’s their Republican?

Hopefully not a liberal apologist.

Translation: “The only Democrat that responded was Alan Grayson, so we decided to roll with that. Oops.”

“How could Politifact not have known or been aware of Graysons reputation for being nasty as all get out?”

Because that’s something the lefty news media would ever say about one of their own and it never even occurred to anyone at Politifact to check the Conservative media.

They live in their bubble world, and to them leftists are moderates. When you are surrounded by like thinking people, you get into group think. You see things the same way. To their views, Grayson wasn’t outlandish, merely one who was outspoken, and “brave enough” to voice what they believed.

At least a democrat who gets bitten by an animal that he suspects has rabies will seek medical treatment instead of denying that rabies exists.

You have it backwards. A Republican will seek immediate treatment. A Democrat won’t, because that would be racist.

“Politifact would like to welcome our new Diversity Officer. A former army corporal, aspiring painter and author of the best-selling #2 NYTs pick: My Struggle…”

I hear Cynthia McKinney is available.

What were they expecting? This is Alan Grayson.

“It’s my nature, said the scorpion.”