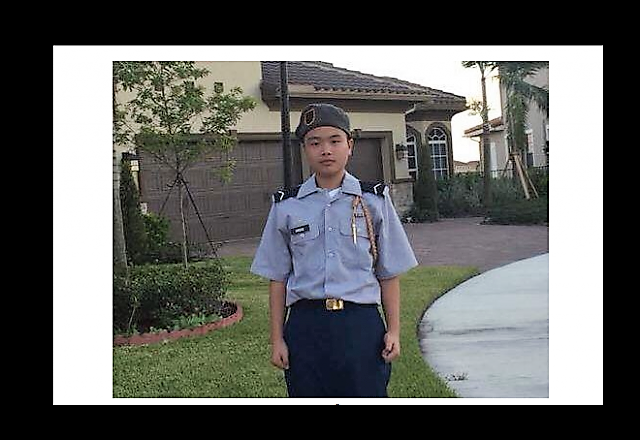 The Stoneman High School JROTC performed heroically during the shooting at their school in Parkland, Florida.  Two JROTC enlistees herded students and teachers into a room and shielded them with kevlar, their quick actions undoubtedly saved not only their own lives but those of others under their protection.

A third JROTC member, Cadet Peter Wang, was just as heroic but did not survive.  Wang ushered students into a different classroom and was killed in his valiant efforts to save others.

Peter Wang, 15, was a freshman at Marjory Stoneman Douglas High School, where he was a member of the JROTC program.

“He is so funny, caring and selfless,’’ said Lin Chen, Wang’s 24-year-old cousin.

She said Wang, who was born in Brooklyn, N.Y., was wearing his gray JROTC shirt Wednesday when the shooting happened. She said a friend of his told her Wang was holding a door to let other students out before him.

She said she wasn’t surprised to hear that.

“He is so brave. He is the person who is genuinely kind to everyone. He doesn’t care about popularity. He always liked to cheer people up. He is like the big brother everyone wished they had,’’ added Chen, who flew in from Louisiana to be with the family.

Efforts are now being made to honor this brave young man.  These efforts include a petition to make an exception in his case and allow full military honors at his funeral on Tuesday, active military attending his funeral in military dress, and those unable to attend are sending in military patches, coins, and other items.

As a cadet in the JROTC, Wang was not yet an official member of the United States military, and so would not be entitled to the military funeral honors offered to service members and veterans, but his school’s JROTC have a protocol to conduct the funeral service and provide an honor guard.

As one redditor, HighNoon44, commented, “Peter embodied the Army values and he was our brother.”

In addition, the posters at r/military are organizing two main efforts. Those who are able to attend Wang’s funeral next week will attend in uniform. The service is open to the public and will be held at the Kraeer Funeral Home in Coral Springs on Tuesday, February 20, with visitation starting at 11:00 am ET and the service at 1:00 pm ET. Full details are available at here.

Those who cannot attend are sending military patches and coins to Wang’s family. For privacy reasons, they are not posting the family’s address but have a web form where those interested can submit their email address to get mailing instructions.

JROTC freshman Peter Wang may not have actually served in the U.S. armed forces, but that's not stopping the members of r/military from arranging a uniformed presence at his funeral https://t.co/vtEaGuool4 pic.twitter.com/SVNZ1sUpuN

Many have gotten thru. It may be swamped.

It took me a couple tries.

Cadet Petty also died. Circumstances unclear. She was only a Freshman. A Navy Reservist also died helping students and running into the fire.

Secretary Mattis should attend the funeral of young Mr. Wang.

Ohh, that would be AWESOME!

This is a great case for President Trump to decide because he himself went to a military academy yet never served in the military. The JROTC, the ROTC, the CAP, and some other youth organizations are like military academies. They are NOT the regular military.

But they are a significant entrance point. My wife was ROTC and a CAP-ette who went on to the Air Force Academy and NASA. He should be honored for what he did… and why he did it. We all cannot be sheeple.

While signing the petition, I noticed that 85,000+ signatures are still required.

This whole thing is silly and made up. Just because somebody thinks that military funeral honors are appropriate doesn’t mean that violating hard and fast rules of the military is somehow permissable.

*Military members on active duty or in the Selected Reserve.

*Former military members who served on active duty and departed under conditions other than dishonorable.

*Former military members who completed at least one term of enlistment or period of initial obligated service in the Selected Reserve and departed under conditions other than dishonorable.

*Former military members discharged from the Selected Reserve due to a disability incurred or aggravated in the line of duty.

No, it’s neither silly nor made up.

The young man was murdered while helping his fellow students.

There would be nothing wrong with honoring him in a suitable fashion given his status.

The easiest way would be a group of off duty military members to do it.

The difference here is that he died in the line of his duty.

What line of duty? Mr. Wang was a civilian, at the time of his death, just like the other students and teachers who died that day. He was not, nor had he ever been on active duty, or even a reserve status. He does not meet the criteria established for the presentation of military honors at a funeral, as he was never a serving member of the military.

That being said, there is no reason why uniform members of the military can not attend his funeral. In fact, one or more superior officers from the DOD, who oversee the JROTC program should also attend. The Drill teams from the local JROTC units can serve as an honor guard. Members of the JROTC, and off-duty and retired service members cam serve as pall bearers. A flag ceremony can also be performed. The only thing is, none of this can be done under official orders and most can not be compensated by the government.

Mr. Wang is a hero, as were many that day. But, to grant him military honors, to which he is not entitled under law or regulation, cheapens the sacrifices made by active duty members of the US military.

I think that “but that’s not stopping the members of r/military from arranging a uniformed presence at his funeral http://bit.ly/2ENJHmp” is the most reasonable course of action. Also, they should do the same for anyone who was in the junior programs, or none of them.

And I hope there are Dozens of Uniformed Military there.

He may not have been in the Army, but from reports of his actions he was every inch a Soldier.

Stand down Soldier, you are relieved. RIP

Our military needs more young men like him. Instead we were saddled with the likes of Hassan, Manning and Bergdahl.

He was heroic, but he was NOT a member of the US military. Let’s not cheapen the sacrifice made by our military heros. We do not accept giving medals for valor and heroism to those who did not earn them at the levels of valor and heroism their predecessors had; let’s not make that mistake here.

JROTC has protocols for funeral services; let him be buried according to those protocols.

My personal thought is that the President should award this young man and the other heroes the Presidential Medal of Freedom, it is the highest honor that can be given to a civilian. It seems very appropriate in this case, as would the Congressional Gold Medal.

As a veteran I can readily recognize the heroism of this young man. However, there is an oath of office that separates soldiers from civilians. This oath is critical and needs protection as well as respect. This young man was not a member of the US Armed Forces and is not due military honors.

Most funerals with “full military honors” are actually performed by members of the local Veterans of Foreign Wars or American Legion. Ask them. I’m sure they’d be glad to do it.