Pelosi Heckled While Criticizing Tax Reform: “How Much Are You Worth Nancy?”

Pelosi Heckled While Criticizing Tax Reform: “How Much Are You Worth Nancy?”

“Are you in abject poverty?” 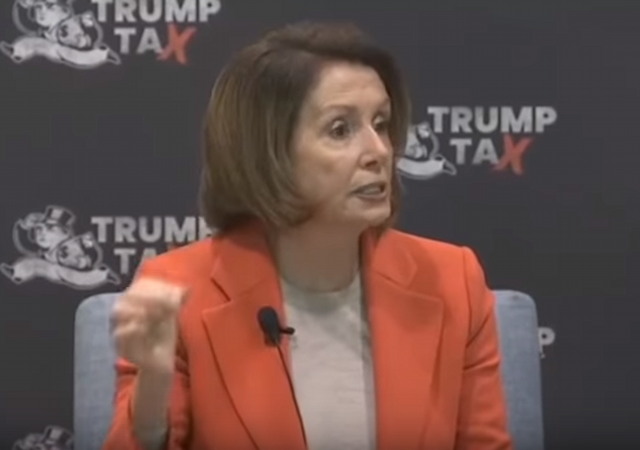 At a town hall event Tuesday, Nancy Pelosi continued her criticism of tax reform by trying to frame it as something which favors the wealthy. At one point she awkwardly read a quote from MLK which she had written down on a piece of paper.

Then she got a question from the audience she should get more often.

‘How Much Are You Worth, Nancy?’: Pelosi Heckled at Town Hall While Slamming Trump Tax Law

Rep. Nancy Pelosi was heckled by a woman at a town hall event Tuesday after she continued blasting President Trump and Republicans’ tax cuts.

“God never intended one group of people to live in superfluous inordinate wealth while others live in abject deadening poverty,” the House minority leader said, adding that the quote was from Dr. Martin Luther King.

As she finished her sentence, Pelosi was interrupted by a woman in the Phoenix, Arizona, audience who asked “how much are you worth, Nancy?”

“Are you in abject poverty?” the woman shouted at Pelosi, who is routinely listed among the wealthiest members of Congress.

Pelosi and her husband Paul Sr., a Georgetown-educated businessman who runs a venture capital firm, are worth about $100 million.

“We’re not talking about that,” Pelosi responded, saying that she can talk “louder than anybody” because she is a mother of five grown children.

There’s a very good reason why Pelosi and other Democrats keep talking about tax reform.

Democrats are struggling to cope with the rising popularity of the Republican tax law, less than nine months until the midterm elections.

Democrats received a wake-up call of sorts earlier this week when Priorities USA, a top Democratic super PAC, released a memo calling on Democrats to message more consistently against the tax law. The law’s standing has increased in the polls as GOP groups pitch the tax cuts to voters as a solid Republican accomplishment.

“I think the memo is spot on. Absolutely spot on,” said Rep. Cheri Bustos, D-Ill., one of the 12 House Democrats who sit in districts where Trump won in 2016.

“We have to stay focused on this,” Bustos said. “You’ve got the budget, the tax bill and transportation that adds up to disaster in many parts of our country and leaves terrible debt for our kids and our grandkids. We’ve got a lot to work with right now, but we’ve got to focus on that. Not all of the other diversions that come up every single day.”

According to the memo, Trump’s marks on both the economy and taxes have grown by double-digits over the past few months.

It’s fascinating how Democrats are trying to frame tax reform as something that steals from future generations. That was something Obamacare actually did.

If we can correct the voting fraud, all of these hypocrites will be out of office the very next term.

notamemberofanyorganizedpolicital in reply to elle. | February 22, 2018 at 5:24 pm

Elle is so right!

People have scratched their heads for the past decades wondering how such obvious creeps stayed in power.

Her hubris is exceeded only by her craven condescension to the little people.

Astounding arrogance that she can claim that government leaders have more right to take your money than you have in keeping it.

MLK, if that quote is correct, was wrong. Jesus said there will be poor always. There has never been a time when all were equal financially.

It also amuses me that the only time that Democrats are concerned with the National Debt is when Republicans are in office, they never have a concern about the crushing debt when it’s Democrat Presidents running up the bills. (Not that I think we shouldn’t always be concerned over the debt, we should be.)

It does not amuse me that the only time that Republicans are concerned with the National Debt is when Democrats are in office. They never have a concern about the crushing debt when it’s Republican Presidents running up the bills.

Do you realize that the tax cuts have been front-loaded for those of modest income and will be phased out? Is it important to you that pass-thru for real estate was specifically added to the bill at the last minute?

There is a sucker born every minute ……..

There is a sucker born every minute ……..While you suck up every lie your masters tell

I would be curious as to what maladies or pharmaceuticals Nancy suffers from due to her shaking, trembling hands and almost slurred speech. Where the hell is Dr. Gupta? 🙂

Where is Dr Kevorkian?

Queen Nancy doesn’t like it when the peasants get uppity.

While tax reform may be insufficient, redistributive change is an uninspired solution at best.