The “cold peace” warms, thanks to terrorists, Iran and Obama! 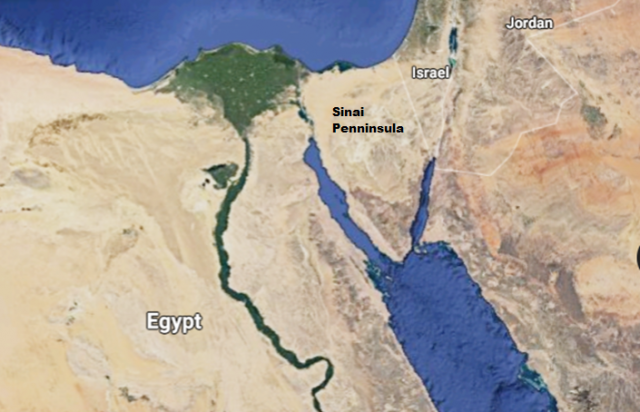 The relationship between Israel and Egypt has often been referred to as a “cold peace”, marked by various levels of mistrust and antagonism from Cairo toward its treaty partner.

However, it appears that the relationship is now far warmer than is widely known. David Kirkpatrick, Cairo bureau chief and a Middle East correspondent for The New York Times, reports that there has been a “secret alliance” between the two nations, as Israeli has hit terror targets in the Sinai at the behest of Egypt’s leaders.

For more than two years, unmarked Israeli drones, helicopters and jets have carried out a covert air campaign, conducting more than 100 airstrikes inside Egypt, frequently more than once a week — and all with the approval of President Abdel Fattah el-Sisi.

The remarkable cooperation marks a new stage in the evolution of their singularly fraught relationship. Once enemies in three wars, then antagonists in an uneasy peace, Egypt and Israel are now secret allies in a covert war against a common foe.

For Cairo, the Israeli intervention has helped the Egyptian military regain its footing in its nearly five-year battle against the militants. For Israel, the strikes have bolstered the security of its borders and the stability of its neighbor.

Their collaboration in the North Sinai is the most dramatic evidence yet of a quiet reconfiguration of the politics of the region.

The alliance is a win-win for both sides. Egypt makes inroads on the terror threats they have found difficult to remove, and Israel gets to do some security-based housekeeping.

Unable and uninterested in physically controlling terrorist-controlled areas, Israel cannot even conceive of attempting to resolve the political problems on its borders. Therefore, it has not tried to implement the classic counterinsurgency strategy of “winning hearts and minds,” which calls for extinguishing the motivation behind conflict through a comprehensive political and social approach. Instead, it attempts to obtain a temporary but significant debilitation of enemy capabilities.

Israeli officials have applied an unpleasant euphemism to their counterterrorism strategy in non-occupied areas: “mowing the lawn.” Israeli strikes target the leadership of terrorist groups and the infrastructure that supports them.

The rise of Iran in the region is a contributing factor in this “lukewarm peace”.

The rise of Iran and its growing regional role – extending from the Gulf to the Mediterranean is alarming countries like Saudi Arabia, Egypt and Jordan.

Circumstances then have pushed some of the moderate Sunni Arab states ever closer towards Israel. They share concerns about both Iran’s regional role and its nuclear ambitions, and the perceived unwillingness of Washington in recent years to confront Tehran.

Diplomatic signals and briefings lead one to believe that there is genuine substance in this rapprochement.

Interestingly, we may have a former President to thank for this improved partnership.

Experts also suggest that the Obama Administration’s Middle East policies may have unintentionally brought the two countries closer together. “The Egyptian military was not happy with what they believed to be the inclusiveness and openness to political Islam with [former Egyptian President Mohammad Morsi’s] government, and the Obama Administration has been wrestling with the Israelis on any number of issues for the past several years,” says Miller. “That has created an indirect community of interests.”

So, the Israel-Egypt bond may be the one, good legacy that Obama has left us…even though it was clearly unintentional.

As I mentioned Egypt, I would also like to share this report about the thrilling discovery of a 4,300-year-old tomb of an Old Kingdom noblewoman named Hetpet.

This is a curious story. Just how inept is the Egyptian air force? It would appear that these air strikes could be conducted by just about any kind of fighter-bomber. And what ever happened to Egypt’s two (2) Mistral assault ships. These are supposed to carry Russian attack helicopters, which are really quite good, and which would be very suitable for attacking rebel camps.

It’s very logical. *Any* Egyptian air strike would involve a few hundred Egyptians, all with cell phones, all of whom have relatives or second cousins or friends of relatives who might be in the target area and it won’t hurt to make one little phone call…

agree with you completely – just about anytime a government agrees to let some outsiders carry out its military objectives, it’s because they don’t trust their own people to carry out those orders honestly.

I think that’s it. The Egyptian military, for a time, was well infiltrated by the Muslim Brotherhood, and despite the recent efforts to root the Brotherhood out, op-sec pro’ly isn’t what it needs to be.

Unfortunately this is not a sign of warming relations; Sisi is using Israel while he needs its help, but the moment he no longer needs it we’ll be back to the old “state of peace” for which Israel paid such a heavy price but which was no better than the “state of war” it had with Syria for free. The fact that Sisi has to keep this relationship secret, for fear that his people would revolt over it, shows just how bad relations really are, and how little hope there is of them ever improving. So what exactly did Israel get for Camp David? And when are the “experts” going to recognize what a disaster that deal was for Israel?

Fair point, but it has allowed Israel’s military to focus a little more on the north and northeast. That Sisi has to keep it quiet is a given; centuries of Jew-hatred in Egypt aren’t going to be overcome in a year.

The Sisi cooperation the last few years may have done that. But Camp David didn’t. It’s been 40 years since Camp David, and for most of that time the “peace” with Egypt was no better than the “war” with Syria. Both borders were quiet, but had to be guarded. The loss of the Sinai’s strategic depth led directly to the arms tunnels into Gaza, the infiltration of the southern border by terrorists and by illegal immigrants, so what was the point?

Agreed, but… Dictators like Sisi are predictable, and thus can be worked with. Sisi wants peace inside his own borders, because it’s a lot easier and more profitable to rule a country when car bombs aren’t going off every day. He of course has no great love for the Israelis; but the great mistake of the M. Brotherhood and the Jihadis is that they have now made Sisi realize that they are far more dangerous enemies to him and to his rule than Israel could ever be. And being a pragmatic military man, he is going to take whatever military help he can get to fight against the military problem that he has right now, today, no matter the source. Later on, he can worry about other problems.

The interesting position that Israel has put itself in, is that they now don’t have to worry about conflict with Egypt until after the problems with the Muslim Brotherhood and the rest of the jihadis are over and done with. If I was them, I’d be thinking that it’ll probably be a very long time before that happens.

the problem is not the leadership of the Arab countries it is the Muslim world supremacist outlook.
this is why Iran is such a danger to these independent countries
– Iran leadership are more interested in their 12er ideology which wants a nuke exchange with Israel and the USA.

This is how Leftists (NY Times remember) gets others (Muslim countries) to put pressure on Egypt because it’s not destroying Israel.

So what happened to all that military aid we sent them?

Sisi may not trust his own air force to do his bidding. They may only agree to attack Israelis. Many Egyption soldiers have died in attacks in the Sinai. Why do all these Non military people have weapons and who gave them the weapons???