North Korea’s dictator is taking advantage of the poverty of Africans to create unfathomably worse conditions for his own people. 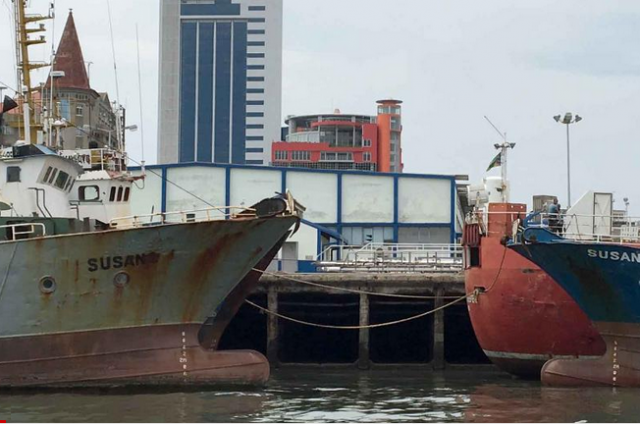 Last week we noted that it appeared that United Nations sanctions against North Korea had begun to work, as the militant country cut back on its military exercises mainly due to the sanctions on oil imports.

However, North Korea has been caught dodging those sections through Mozambique’s rusting shrimp trawlers.

US officials have long said that money from these businesses goes straight to Kim Jong Un’s nuclear missile programme.

UN and US investigators are looking closer at at least 11 African countries’ relationship to North Korea.

Speaking to CNN, Hugh Griffiths, chief investigator of the UN Panel of Experts, listed a number of military activities between the countries, all of which have been banned under sanctions since 2006.

“The foreign currency generated and the revenues generated from all of this conventional military activity can be used to fund the DPRK — that’s North Korea’s — prohibited nuclear and ballistic missile programs.”

The video report is below, and offers a detailed look at how Kim Jong Un is using poor, African nations to help him continue is rogue regime.

One has to wonder what President Donald Trump will make of continued funding for the African countries that are aiding North Korea’s exporters.

Meanwhile, a new UN report indicates that the rogue nation has earned over $200 million from the export of coal and other banned items.

The report was authored by a panel of experts investigating North Korea and has been sent to a UN committee on North Korea. CNN has obtained key sections of the report from a UN diplomat who is not authorized to speak publicly.
CNN has not reviewed the entire document.

Despite numerous rounds of international sanctions, North Korea exported almost all the commodities that had been prohibited in the resolutions between January and September of last year, the report indicates.

It also indicates that North Korea exported coal to China, Malaysia, Russia and Vietnam, in addition to falsifying‎ documents to conceal the origin of the coal.

It does not appear that North Korea is entirely closed for business..at least the kind that serves its dictator.

Many Legal Insurrection readers will recall the moving story of North Korean defector Ji Seong-ho, who Trump cited at his State of the Union speech. Ji lost a leg and an arm while scavenging coal as a boy, and later fled to South Korea on crutches that he waved to the audience.

A few days after the address to the nation, the President met with other North Korean defectors as well:

During the meeting, Trump asked the defectors to tell their stories — some using a translator while others spoke about their experiences in English. After each story, Trump replied with phrases like “tough stuff,” and congratulated the defectors on their freedom.

Hyeonseo Lee, another defector who met with Trump, said escaping from North Korea is not like leaving another country.

“It’s more like leaving another universe. I will never truly be free of its gravity no matter how far I journey. After I escaped to China, I escaped an arranged marriage when I was 19, and I also escaped a brothel. And eventually, I was arrested by the Chinese police, but narrowly avoided being repatriated back to North Korea because of my Chinese language abilities. They couldn’t believe that I was a North Korean defector,” she said.

In conclusion, North Korea’s dictator is taking advantage of the poverty of Africans to create unfathomably worse conditions for his own people.

Nice when CNN sticks to the news. There’s so much to report. Instead they obsess over anything Trump all the way to the bank. It’s probably why they will never stop.

There is a big difference between CNN International and the American, Trump-obsessed CNN.

Usually CNN International is much worse than the US version.

Eh, it’s just their trying to be able to say “we cover real news” once in a while. Exactly like the communist ACLU defendings Nazi marches every twenty years or so to try and b.s their way into making people believe they are not fascists, CNN and the NY times does the same b.s.

The good life for elite. Communism for the rest of us.

In their dreams, literally.

The solution is cheap and amazingly simple – something Donald Trump would like. Hire Nigerian and Somali pirates to take control of the Mozambique shrimp trawlers, rust, cargo and crew – everything, out on the high seas and then they can sell the cargo to the highest bidder – just as long as we get to have the final bid.

These African pirates routinely take out huge, often armed, oil tankers – so a shrimp trawler would be a piece of cake.

Or we could take John F’n Kerry’s Swift Boat from dry dock storage, locate twenty or thirty unemployed DACA sailors to serve as crew and then send them into the South China Sea as Dreamer pirates. (John Kerry, of course, served in Vietnam.)

It might just be easier to ship them poisoned cocktail sauce.

The trawlers would be equipt with heavy machine guns and RPGs.

Americans live in a different universe from many. The man that owns the local liquor store is a Cambodian refugee. I was horrified by his stories of escaping the country when he was a boy. Who here has had family members slaughtered beside them while fleeing through a swampy rice field? By your ‘own country’.

North Korea has a long, bloody history in Africa.

“Zimbabwe, under the rule of despot Robert Mugabe, has long been a friend of the Kim family and recently aided the North Korean nuclear weapons program. After four years of deliberations, an “arms for uranium” pact was signed between the two in 2013. In exchange for arms and ammunition of unspecified quantities, the North Koreans were granted access to Zimbabwe’s Kanyemba district, one of the world’s largest uranium reserves, for the elusive yellowcake used in making nuclear weapons. News of this deal went unknown in the West but Nehanda Radio in Zimbabwe reported on the pact…”

Mugabe is Shona. The Ndebele are a northern branch of the Zulu. They hate each other. Or at least Shona like Mugabe hate the Zulu.

It isn’t just African poverty the NORKs are taking advantage of. It’s also dictatotors’ love of power and revenge on their rivals.

“…In October 1980 Mugabe signed an agreement with the North Korean leadership that stipulated that 106 North Korean military advisors would train and equip 3,500 soldiers loyal to Mugabe’s political party, the Zimbabwe African National Union (ZANU). Mugabe was supposedly having trouble with internal “malcontents.” In August 1981, the advisors arrived in Harare, Zimbabwe’s capital, and though the North Koreans were reputed for their toughness, they became infamous for their lavish lifestyles and lack of personal discipline. Subsequently, the first group of North Koreans was phased out in 1982. The second group, under the command of Major General Sin Hyon Dok, trained the notorious Fifth Brigade that would carry out the brutal Gukurahundi campaign. The Fifth Brigade answered to only Mugabe and consequently saw themselves as above the law.

The Fifth Brigade went on to kill 20,000 civilians in Matabeleland, the southern region of Zimbabwe populated by the ethnic Ndebele minority, which supported Mugabe’s main opposition, Joshua Nkomo, and the Zimbabwe African People’s Union (ZAPU). Gukurahundi, in Shona (one of the 16 official languages of Zimbabwe), means “the early rain which washes away the chaff before the spring rains.” During the campaign, numerous human rights atrocities were committed – the vast majority of those killed dug their own graves and were then shot in public executions. Despite Mugabe’s best attempts to cover up the atrocities, the Matabeleland Massacre left an indelible mark on the psyche of its residents. As a result, perhaps no other people in the world detest North Korea as much as the Ndebele…”

There are other stories like this about the NORKs in other countries in Africa. Dictators truly admire the Kim dynasty.