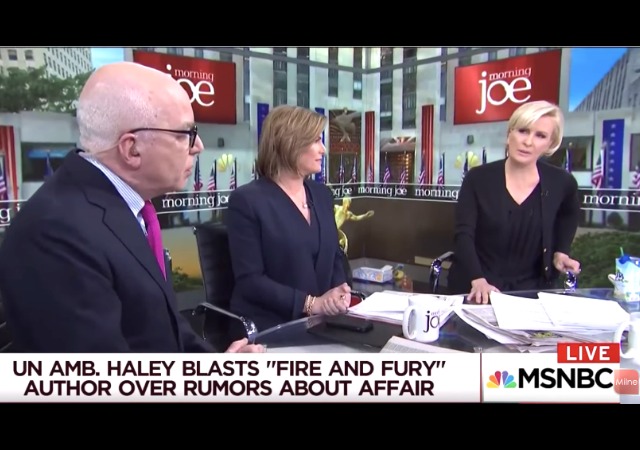 Can we finally STOP taking Fire and Fury author Michael Wolff seriously? Of all people, Morning Joe‘s Mika Brzezinski finally brought the arrogant man down a peg or two over his comments on US Ambassador to the UN Nikki Haley. From The Washington Examiner:

“I’m gonna go as far as to say that you might be having a fun time, playing a little game dancing around this,” Brzezinski said, “but you’re slurring a woman. It’s disgraceful”

This all started when Wolff said on “Real Time” that President Donald Trump is currently having an affair and if people read between the lines of his book they could figure it out.

People immediately jumped on Haley, who wasted no time pushing back against the rumors.

Wolff used this as an opportunity to show his true colors as an opportunistic misogynist when he said during an interview that Haley seemed to “embrace” these rumors and continue on the media circuit.

This feud brought him to Morning Joe, but it did not end up like it usually does. He tried to deflect blame to others, but Mika wasn’t having any of it:

“I’m gonna go as far as to say that you might be having a fun time, playing a little game dancing around this,” Brzezinski said, “but you’re slurring a woman. It’s disgraceful”

Wolff maintained that Haley had not been directly accused of anything, though he had previously said he was certain Trump was having an affair and pointed readers to “read between the lines” of his book to figure it out.

He had also said in a separate interview this week that Haley “embraced” the rumor.

Haley has denied the accusation.

“She has decided to deny what she has not been accused of,” Wolff said. “Certainly, I didn’t accuse her of this.” He told Brzezinski to “read me the language” from the book.

“I’m not reading you anything,” she said. “If you don’t get it and you don’t get what we’re talking about — I’m sorry, this is awkward here on the set with us, but we’re done.”

Oh, Wolff didn’t stop there. To discredit himself even more, he took to Twitter to whine about Mika’s behavior: 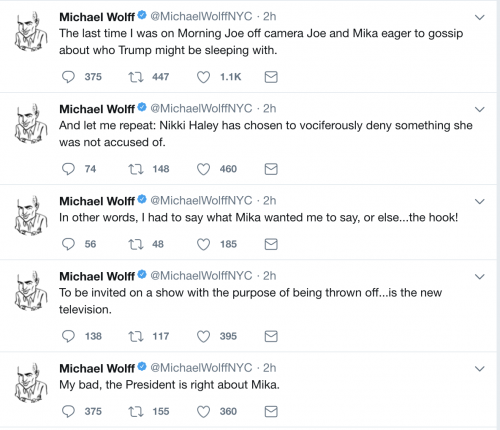 Weirdly enough, as far as I have seen, Wolff has not lashed out at men who have criticized him. Erik Wemple at The Washington Post expressed his disgust at Wolff after the author made his comments about Haley embracing the rumors (emphasis mine):

Now the matter has boomeranged back to Wolff, who is showing why, perhaps, we might not want to place too much credence in the entire book. In an interview with theSkimm, Wolff was confronted with the fact that Haley was “distraught” about the whole thing. “Or she seems to me — I would say she seems to have embraced it,” responded Wolff. Asked to explain himself, Wolff continued, “Well, I don’t know. All she does is hammer on this fact. I mean, if I were being accused of something, and I am not accusing her of anything. She hasn’t tried to avoid this, let’s say,” responded Wolff.

Embraced it? In what reportorial universe is Wolff living? Here’s an idea for Wolff: Go straight to the Politico interview with Haley, and listen to her address this matter. “It is absolutely not true. It is highly offensive and it’s disgusting … It amazes me what people will do and the lies they will say for money and power,” said Haley, who rebutted the specifics of Wolff’s allegations. The “bigger issue,” said Haley, was that “if you speak your mind and you’re strong about it and you say what you believe, there is a small percentage of people that resent that and the way they deal with it is to try to throw arrows — lies or not — to diminish you.” While most men respect women, Haley said, there’s a “small group” who will “resent” women doing a righteous job.

Wemple also pointed out that as much as Wolff tries to deflect the blame, evidence shows that the author directed everyone to Haley. He told theSkimm that “some other reporter accused her,” but Wemple reminds his audience that Wolff said on HBO, “You’ll know it. Now that I’ve told you, when you hit that paragraph, you’re going to say ‘Bingo.’”

To say all of this disgusts me is an understatement. I become even more disgusted when I remember that FAILED Democrat presidential candidate Hillary Clinton (I will never tire of writing that) read excerpts from this book at the Grammys.

Wowser. Out of the whirling dust in the wind that is Miki’s grey matter, a rare piece of intellectual consistency.

That is news indeed…

Every time I think of Mika and Joe, I’m taken back to this quote:

UHURA: It doesn’t make any sense.
SPOCK: To expect sense from two mentalities of such extreme viewpoints is not logical.
SULU: But their planet’s dead. Does it matter now which one’s right?
SPOCK: Not to Lokai and Bele. All that matters to them is their hate.

Star Trek “Let That Be Your Last Battlefield”

Yet she has NO problem with him slurring a man (Trump.)
What a hypocrite.

Beat me to it…

One fraud booting another fraud off of her show, rich.

when the big, bad, Wolfe has lost Mika

Why’d she have have him on in the first place?

You lie down with the Wolff, you get fleas. Another case of #SheKew #SheProgressed #SheOstensiblyRegrets

I’d compare Woffle to Grim Wormtongue were there anyone of power or influence who actually believed his fabrications. Some will say they do, of course. They are liars. Most will be satisfied to leave his slanders lay, to do what damage they will.

I’m sure there are power-brokers on the right that are sufficiently debased to use such tactics in an appropriate situation, but the poison would never survive the dual drumbeat of media condemnation and the damnation of honest actors on the right. Only when the honest actors are few and far between is such a tactic useful, as in this case.

What’s really funny is that Wolfe has been on twitter claiming that Mika and Joe were laughing and gossiping with him off set, and then they got on camera and made a big show of throwing him off just for the camera.

I don’t know or care if what he says is true, it’s just hilarious to watch this pack of vipers bite each other.

Wolff is living proof that as long as your subject (person) is right, tabloid journalism whether magazine or book will make you rich in this era. This period where there is no end to reality TV shows and Twitter “facts”, etc.

What’s admirable about this performance? Stupid Mika gives this vile pustule yet another platform for his lying spew … while she pretends to have nothing to do with his little con about him having nothing to do with it, either. A fake pretending to not be a fake … is still a fake.

Mika and Wolfe are both intestinal parasites gnawing away on the vital organs of the Republic.

This is just the Democrats FINALLY realized that nobody takes Wolff’s bullshit seriously.

His ‘bombshells’ were all duds, people simply don’t care.

Now, weeks later, they’re FINALLY willing to tell him to shut up when they realize nobody is listening to his lies. Too late.

As much as I find Mr. Wolff to be reprehensible in his slurring others, he does have a point. When he brings scurrilous accusations about Trump, Mika is all ears and happy to give him a stage. Now, all of a sudden, the victim is a woman and he is being inappropriate? What about equality and all that jazz? Ms. Chastain, you bring up a good point, that Mr. Wolff doesn’t seem to be responding to men who object to his sleaze. Bad business, sliming others character. All that “he who robs me of my good name…” stuff.

But she’s a Republican. I thought that made it okay?

This type of foreplay is what makes the insane so lovable! It just makes you want to hug them….crazy people are so cute when they fight!

Getting disrespect and tossed off the set by Mika Brzezinski(psycho Joes attack dog) must be the kind of horror every wingnut imagines. LOL

As for slandering Nikki Haley, the only appropriate response would be removing him via the gravity elevator outside the window.

so, Mika is ok with that reprobate Wolff slurring MEN, but when he slurred a WOMAN he crossed a red line? WTFO?

so, Mika is ok with that reprobate Wolff slurring MEN, but when he slurred a WOMAN he crossed a red line? WTFO?

But everything he said about Bannon is still good, right?