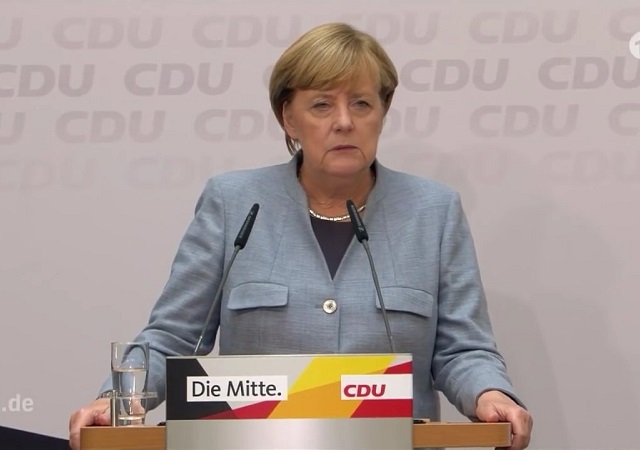 Chancellor Angela Merkel has finally reached a coalition deal with the Social Democrats (SPD) four months after her conservative bloc failed to win a majority in German elections. The deal forced Merkel to hand over key ministries and make painful concessions to her left-wing coalition partner. The details of the final agreement triggered criticism from both the media and the conservative bloc — made up of Merkel’s Christian Democrats (CDU) and its Bavarian sister party, the Christian Social Union (CSU).

“Chancellor at any price,” wrote German tabloid Bild in its cover story. “Merkel hands over the government to the SPD.”

The price is enormous. The winner is primarily the SPD, which grabbed several top ministries. Fearing a new election, Chancellor gave up control over import positions within the government. CDU-chief Merkel becomes Chancellor at any price. [Translation by Author; Bild Zeitung, February 7, 2018]

Merkel’s handing over key ministries, such as finance, foreign and labor portfolios, to the SPD, was seen as a sign of weakness by many of her conservative supporters. German newspaper Die Welt reported the public mood:

An overwhelming majority of Germans see Chancellor Angela Merkel as weakened following the negotiations to form the new grand coalition. This impression is shared by the voters of [Merkel’s] conservative bloc as well. (…)

At 63 percent, almost a third of the population believes that Merkel has come out weaker from the coalition talks, a third of them consider her position to be ‘clearly weakened’. Only 16 percent see Chancellor in a position of strength, five percent of which see her coming out of this clearly strengthened. [Translation by Author; Die Welt, February 8, 2018]

Unlike Merkel’s conservative base, the pact was cheered by the EU top brass. “Fully in line with this new sense of a breakthrough moment for Europe,” European Commission President Jean-Claude Juncker said while commenting on the deal.

“Now it is high time to build an inclusive pan-European Grand Coalition for an ambitious budget, wise agreement on migration and a better Eurozone,” EU chairman Donald Tusk said on Twitter.

The final draft of the coalition agreement is 177 pages long. The preamble of the document reads: “We are experiencing a new political age in German that entails diverse challenges, both domestically and internationally.” Germany is a worldwide “recognized partner”, but “only with a new awakening for Europe can Germany guaranty peace, security and prosperity.”

Germany should take a more active part in the debates aimed at strengthening the EU. The eurozone needs to be reformed together with [the support of] France. The aim should be a “solidarity-based division of responsibility in the EU”  and in the refugee policy. In broader terms “we are ready to pay more towards the EU household.” (…)

In future, the asylum procedure will take place in “central admission, decision and deportation institution”.

The reunion of the close family [members] of the refugees holding subsidiary protection status, for example from Syria, has been suspended till June 31. After this date the following has been planned: Till August, the refugees holding subsidiary protection can bring their family members, but only to the limited number of up to 1,000 people per month — a law to that effect will be prepared.  (…)

The CDU and the SPD passed the climate protection goals to reduce the greenhouse gas emissions by 40 percent compared to  that of the base year of 1990. To implement [this agreement], legally binding climate protection goals need to created in energy, transport, agriculture and buildings by 2030. [Translation by Author; Der Speigel, February 7, 2018]

The unhealthy obsession with Israel found its way into the bipartisan agreement as well. The document meant to focus on domestic issues, for some curious reason, criticized Israel’s “settlement policy”.

The German-Israeli Society (DIG) questioned the government’s motives behind bashing Israel in the pact. “I am not sure if this really needs to be part of a German coalition agreement. This is taking sides.” Hellmut Königshaus, President of the DIG, told the German newspaper Die Welt.

Israel-bashing has long been high on the agenda for the SPD. Germany’s outgoing Foreign Minister and SPD party chief Sigmar Gabriel repeatedly described Israel as an ‘apartheid’ state during his tenure.

The incoming Foreign Minister Martin Schulz appears to share his predecessor’s political instincts. In 2014, Schulz falsely accused Israel of rationing water supply going to the Palestinians in his speech at the Knesset. Schulz at that time was serving as the President of the EU parliament.

The otherwise tame Der Spiegel magazine described the coalition agreement as ‘socialist’. The editorial dug into Merkel’s Socialist upbringing in the Communist East Germany, a theme mostly ignored by German media during the election coverage.

Media criticism and voter disillusionment came a bit too to late in this political theater. While the coalition agreement still needs to be rectified by half a million SPD members, the country seems to be steering towards four more ‘costly’ years of Merkel.

“…after her conservative bloc failed….”

Only in the execrable glare of full on communism could Merkel’s socialist repression be called ‘conservative.’

The fact that the EU top brass ‘cheered’ this pact only serves to illustrate the malignant spurit of the politbureau is alive and well and thriving on the continent.

Mutti Merkel has been a tragedy on her own without these lefty dipsticks egging her on.

the German voters are going to get what they wanted, and they deserve to get it food & hard.

Es machts nichts. This is only an interim government.

1) Either the government will fall out of incompetence or corruption and there will be new elections. [one thing to watch is a defense scandal akin to our LCS fiasco. Their new “Baden-Wurtenburg” class frigates are abominations. The computer systems do not work with each other, the ships control and navigation systems do not work. It is doubtful if they can use their weapons, and whoever designed them left them with a permanent list to starboard. This is Germany’s biggest shipbuilding program since the end of the Cold War. Those in Merkel’s government who were in charge had no experience in defense or industry, but sure were politically correct]. Whether they will be honest elections is open to doubt, as is whether they will be conducted under a “state of emergency”. or

2) There will be open violence over the Muslim invasion. or

3) The Caliphate will take over.

It is not like the BRD is an ally or anything.

Related: Insty has a link up re Germany’s failed procurement system for a naval LCS ship. Google up:

Now read the comments. They are channeling Nevile Chamberlain. Completely clueless remarks that it’s okay to have suboar military spending because we can always choose not to go to war.

Germany is doomed. The EU with it.

The alternative for Germany might have won more votes if they got rid of their anti Jew rhetoric. Jews were never a problem in Germany
but the muslims will be the death of their country. I spent about 5 years in the country while in the USAF and never enjoyed any of mine time there. Germany was punished severely after WWII, and deserved it but what they are doing to themselves with muslim immigration is
something only the most evil sadist could take pleasure in.

Venezuela on the Rhine

Anyone who has paid actual attention to Merkel and her politics should not be at all surprised by this.

The writing is on the wall. Merkel’s on the way out. She’ll be gone in the next couple of years. God help Germany if someone more liberal takes over. I would love to know more details on what SPD really thinks about immigration. Pretty sure it’s not good.

Mustang, you are essentially correct, but the terms “liberal” and “conservative” in Germany and Europe in general have no coherent meaning. It’s like the dems and their anti-American pals in the media referring to themselves as “centrist.” A joke, at best.

I always wondered why Merkel’s party is called conservative as they are far from it.

Pearls from the mouths of the Euro-Bureaucrat Elites:

“solidarity-based division of responsibility in the EU”

Although they should have thrown in “diversity”, “alt-gendered inclusion”, etc.