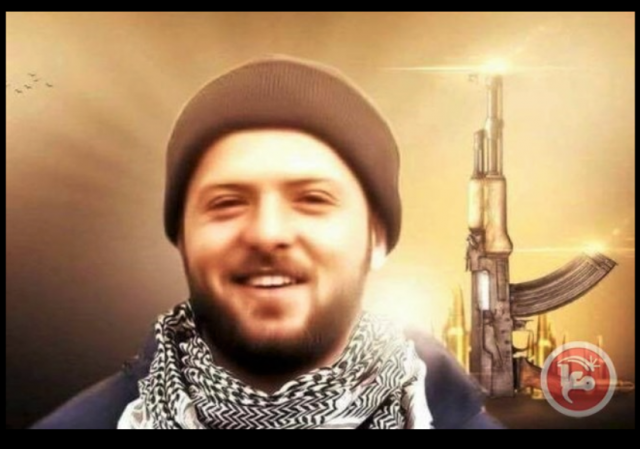 On January 9, 2018, Rabbi Raziel Shevach, a father of six from the West Bank settlement outpost Havat Gilad, was killed when terrorists opened fire on his car.

Haaretz reported at the time:

An Israeli father of six was killed on Tuesday evening in a drive-by shooting close to the West Bank city of Nablus.

The Israeli military said that the 35-year-old victim was driving on Route 60, the main highway in the West Bank, when his vehicle was apparently targeted by gunmen in a passing car.

After the shooting security forces swept the area adjacent to the West Bank outpost of Havat Gilad. The man was identified as Rabbi Raziel Shevach, a resident of the outpost….

Prime Minister Benjamin Netanyahu reacted to the news of the shooting on Tuesday night. “I am expressing my deep sorrow and sending condolences to the family of Raziel Shevach, who was murdered tonight by a despicable terrorist,” he stated.

“Security forces will do everything possible to reach the contemptible murderer and the State of Israel will bring him to justice,” the premier added. 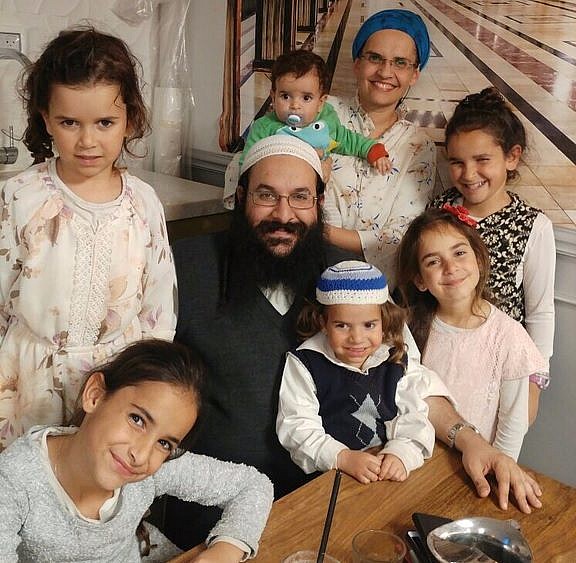 Since then, the IDF and Shin Bet security service have been searching for the members of the cell, some of whom were previously arrested or killed.

But the mastermind of the cell, Ahmad Nassar Jarrar, eluded capture. Until now.

Jarrar was just killed, The Times of Israel reports:

Israeli troops shot dead Ahmad Nassar Jarrar, the suspected ringleader of a terrorist group responsible for a January attack that killed an Israeli rabbi, during a pre-dawn raid in the West Bank on Tuesday, the Shin Bet security service said….

According to the Shin Bet, troops from the Israel Defense Forces, Shin Bet and Israel Police’s Special Patrol Unit arrived at the building where Jarrar was hiding in the village of Yamoun, near Jenin, early Tuesday morning, following a “determined and complicated intelligence and operational effort.”

When Jarrar, 22, exited the building, he was armed with an M-16 assault rifle and a bag of explosives, prompting the Israeli troops to open fire. The suspected terrorist ringleader was killed in the shootout, the Shin Bet said.

No Israeli troops were injured.

The IDF, which was responsible for the operational aspects of the mission, would not comment on whether Jarrar opened fire at the Israeli security forces during the raid.

A graphic photograph from the scene, which quickly spread on social media, showed a person who appeared to be Jarrar wearing an old Israeli military jacket, lying on the ground, covered in blood and surrounded by M-16 assault rifle ammunition cartridges. 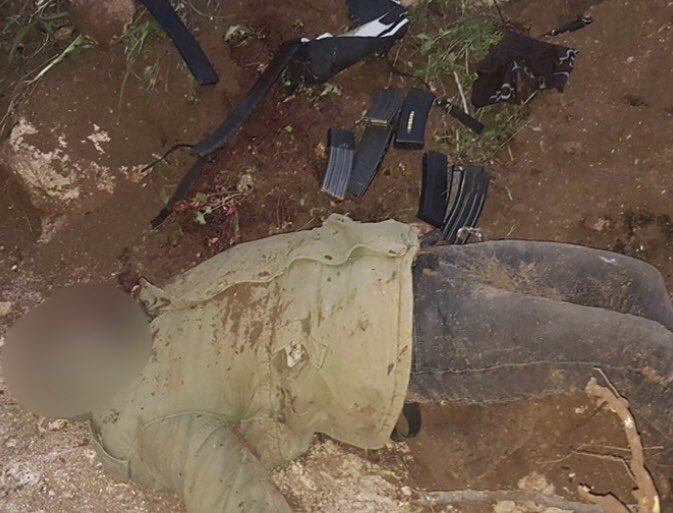 While the terror attack appears to have been a Hamas operation, Mahmoud Abbas’ Fatah Party has praised the attack and killer, as PalMedia Watch reports:

Abbas’ Fatah Movement was quick to honor as a “Martyr” Ahmed Nasr Jarrar who led the group of terrorists who shot and murdered Rabbi Raziel Shevach, father of 6, in a drive-by shooting last month. The terrorist was killed by Israeli soldiers yesterday while resisting arrest. Fatah posted the picture of Jarrar with his father, calling him the “young lion”: 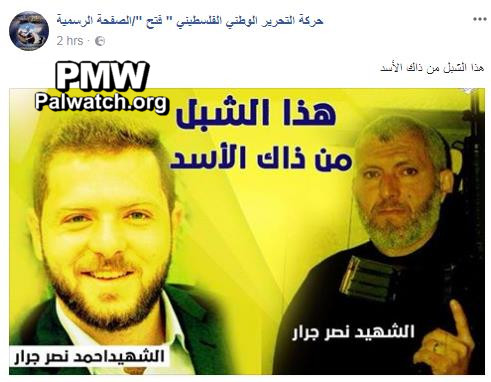 The image shows terrorist Ahmed Nasr Jarrar (left) and his father, terrorist Nasr Jarrar, who is holding an assault rifle. The father was a Hamas terrorist who planned two attacks in central Israel – a double suicide bombing in the Sheba Hospital and a truck bombing in a multi-story building – attacks that were thwarted when he was killed and other members of his terror cell were caught by Israeli soldiers in 2002.

Jarrar also was praised by Bassem Tamimi, the so-called peace activist we have covered extensively, who pioneered the use of children in viral videos attacking Israelis: 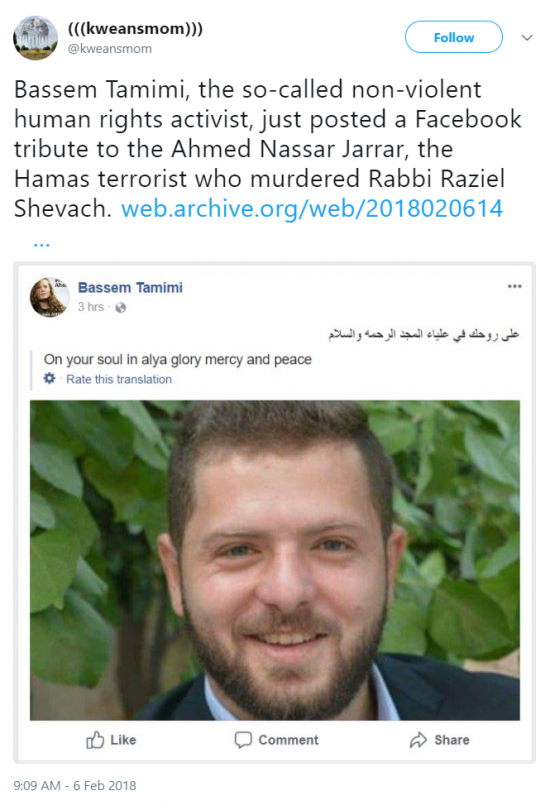 The terrorist also will be honored in his home town:

The mayor of Yamoun, the town in which the terrorist who murdered Rabbi Raziel Shevach – a father of 6, was hiding, says after the terrorist’s death this morning:

“We will erect a memorial where he died to honor him”.

[Featured Image: Maan News Agency, poster of Ahmad Nasser Jarrar circulating on social media in the wake of his death]

Yeah, I’m hoping the blur in the death pic is because he was a victim of multiple head-shots …

“We will erect a memorial where he died to honor him”.

Why? Because he killed a father of 6 kids? How hard is that? Anyone could do it if they were so inclined.

simple idea – as soon as a monument is erected, people who are so inclined can add a few additions, such as sensors on explosives so that the monument worshipers can join the splodydopes in hell.

Summary…. was killed by Israeli troops. No Israelis were injured.

The perfect “memorial” would be a urinal with a pitcure of his face inside it.

Time for the US to abandon idea of 2 state solution.
From the river to the sea Israel shall reign.

actually we Jews have been wronged so much – just examine boundaries of balfour document.

Far better this than to capture & convict only to see him set free in a few years as a concession demanded by a US Sec State in order to appease the Palestinians to get them to the table for “peace talks” that never amount to anything at all.

This is what I love about the Jews. They do actually, for the most part, deliver justice in the end!

Damn, I love the way the Israeli’s do business.

“Time for the US to abandon idea of 2 state solution.”

Something I don’t get, maybe someone can explain Jewish Democrats. I was guest at a Seder dinner and made a comment that “the solution will inevitably be a Victor’s peace”, implying that Israel would eventually resolve this through war. My Jewish peace corps cousin inlaw looked at if I had suggested we boil the kids for dessert.

What gives? Do Jewish Democrats believe Israel can keep this up forever?

Yes. Their “religion” is modern liberalism, flavored here and there by something they read in a “modern midrash” or a children’s Bible stories book. It’s basically indistinguishable from Unitarian Universalism.

None of their values are directly drawn from Jewish primary sources; their only distinctly Jewish values are to remember the Holocaust (but usually to draw the wrong lessons from it), and to fear Christians.

Even the values that their parents took for granted: support Israel, marry within the tribe, and say kaddish and yizkor for your parents when they’re gone, are now gone. As recently as 20 years ago synagogues that were almost empty all year would get overflow crowds on yizkor days (there are four of these a year), just for those 20 minutes or so; no longer. The new generation no longer takes supporting Israel for granted, and is more likely to support J-street, if not JVP and Code Pink. And even the idea that there’s something wrong with intermarriage is now treated as if it’s inherently bigoted and therefore un-Jewish.

Oh, and this is true even in Israel. The new Israeli “ethics” including celebrating intermarriage as a good thing. Especially with Arabs. Organizations trying to dissuade Jews from marrying Arabs are now reviled and treated as if they were the KKK.