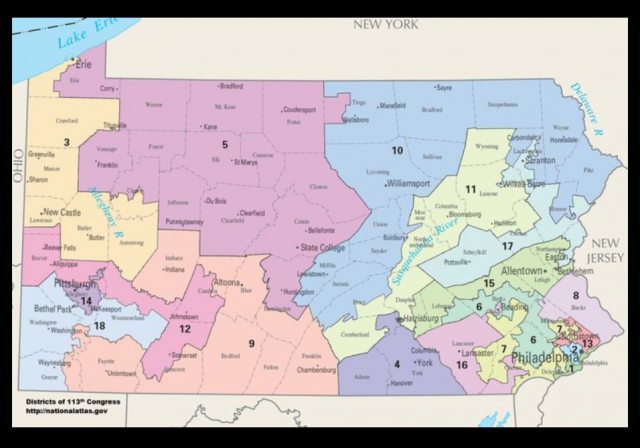 Two members of PA’s state legislature—its Speaker of the House and president pro tempore of the Senate—quickly asked the U.S. Supreme Court to intervene and stay the ruling.

The request went to Justice Alito, who has responsibility for the Third Circuit.

This afternoon, Alito denied a stay, bringing the 14-day drama to an end. After requesting additional briefings from the legislators and plaintiffs in the case—leading observers to speculate that a majority might be seriously entertaining intervention—Alito denied the legislators’ application without comment and without even referring the request to the full court.

Most likely, he saw that there was no chance five justices would touch this, or wanted to send a message to Republicans that it’s hopeless to try to persuade the Court to involve itself in internal disputes between the branches of state governments—the Elections Clause notwithstanding (see prior post on this.)

While SCOTUS has intervened in Wisconsin, Texas, and North Carolina to block lower court rulings requiring re-districting before 2018, Pennsylvania seems to have been a bridge too far for the justices.

In this particular instance though, that’s a shame because it just allows a partisan state court to draw the maps instead of a partisan state legislature—it’s not like the PA legislature’s map has been substituted for that of a computer or an independent commission. Perhaps the PA Supreme Court will decide to be “fair,” but there’s no guarantee that it will. Certainly no one can force it to be.

As it happens, the legislators are now asking two PA Supreme Court justices to recuse themselves due to their public statements in opposition to gerrymandering—a little late, no doubt.

The litigation will drag on, but the story is over. The decision stands and the districts will be redrawn.

The good thing for the GOP is that I may have previously exaggerated the impact re-districting will have: it turns out that new maps may not cost them more than two or three seats.

One of the most egregiously gerrymandered districts—Pennsylvania’s 7th—is currently represented by Patrick Meehan, who is retiring anyway due to reports that he used taxpayer money to settle a sexual harassment allegation.

Districts 6 7 and 13 are rotten gerrymandering. There are simple rules that could apply, as a matter of equity: (1) Honor local political boundaries scubas as counties, municipalities, school district boundaries. (2) Honor the economic-geography of human habitation, that is as the founders suggested in some writings: keep rural districts rural so their representative can represent the interests of the rural inhabitants when those are quite distinct from those of urban dwellers.

As you said, a state law case decided by the State Supreme Court – SCOTUS usually steers clear of those.

Alito is what an impartial Supreme Court justice looks like.

Impeachment and removal from office for establishing a judicial tyranny is in order.

via DUQUESNE UNIVERSITY web presence at time of posting

—
As I wrote earlier there’s NO WAY the districts around Philly do that in re counties at least.

None of that has anything to do with congressional districts.

And why not, for a good example — which the PA Constitution is regarding the other districts– would be equitable guidance in a matter of “equity”, and since “one man one vote” national congressional districts are matters of equity. That’s what one man, one vote means, all men are equal, and the PA Constitution’s GOOD guidance in re the state level districts applies as a matter of equity. The dust that falls off each man’s feet is equal.

Um, what language was that in? It sounds astonishingly like English, but it’s not. Frisian, perhaps?

Milhouse, as anyone ever suggested to you that our legal system is so corrupted BECAUSE of scoffers who act from endowed chairs and such in ways such as thou presenteth?

There is a very clear provision in the Constitution of the Commonwealth of Pennsylvania regarding HOW electoral districts are to be set up. But, as any scoffer could say, and you did, that doesn’t specifically list the districts for the electors nor the representatives to the national assemblies. Yet it is a quite reasonable and clear guidance, full of common sense and equitable motive.

But that is not enough for the likes of you?

I remember Nixon, you are not Nixon. Nor are you a cartoon character created by Matt Groenig. But you present as pretension in your name, right? Now we know there was a “Brutus” and a “Pennsylvania Farmer”, but in their chosen aliases, pen names, they chose names with some significant meaning to the motive and philosophy they had.

Can I suggest that you chose a cartoon character name from a cartoon show dedicated to cultural mocking and scoffing, some proper, much over the top and malicious — as the very name “Milhouse” was — for a reason of your chose motive and philosophy?

What sayest thou, aye, man?

How can it possibly be Constitutional for a court do do so when the elections clause clearly says it’s the responsibility of the legislature.

Evidently you have briefly skimmed the state constitution but not paid any attention to what you were reading. The PA constitution does not say one word about congressional redistricting. Not. One. Word. The court struck down the Congressional Redistricting Act for “clearly, plainly, and palpably” violating the constitution, but doesn’t specify how it does so. However the petitioners’ challenge raised claims involving the Speech Clause, the Free Association Clause, the Elections Clause, and the Equal Protection Clause, but not Art. II § 17 (Legislative Reapportionment Commission), because it clearly does not violate that section, which has nothing to do with it.

Those judges are out of control with black robe fever if they think they can violate the U.S. Constitution and usurp a power that the Constitution clearly says belongs to the legislature. No exceptions.

So far, none of this is in the least controversial. The only point of legitimate controversy is what sort of remedies the state courts can order when the legislature disobeys them in this regard. The state supreme court seems to have taken the view that it can substitute its own map for the legislature’s, as it clearly can for state elections. The text of the US constitution seems not to allow for this. But this is such a minor point that it’s unlikely to carry much weight with the present SCOTUS. De minimis non curat lex. Maybe after a few more changes on the Court, but maybe not even then.

So- if the legislature tells the PA SC “F U”, doesn’t redistrict, since it was done IAW the PA Constitution to begin with, and tells the election boards “You WILL use the existing districts!”- What’s the court going to do? Activate the National Guard and tell them to arrest all the legislators? Hold them all in contempt and order them jailed? Who are they going to get to enforce the order? I don’t live in PA, but methinks the legislators ought grow some testicles and ignore the court, and tell the court they’re ignoring an obviously unconstitutional power grab by tyrannical judges.

The legislature can’t give orders to the election boards. The court can and will, and the boards will obey those orders, or they will be arrested.

Of course they can, Milhouse. Those orders are known as laws. You may have heard of them. It’s what legislatures do.

Laws are not orders. They are very different things, which you ought to know. The legislature cannot order anyone to do anything; the courts can. And the courts are the sole arbiters of whether the legislature’s laws are valid. So in any conflict the boards of election will obey the courts and not the legislature.

With one representative representing up to 600,000 people, it is ridiculous to pretend that ‘fair’ representation is even a possibility. All the PA court has accomplished is transfer the ‘spoils’ to other hands.

As a 72 year old man, I’ve never in my lifetime had a representative represent my interests. Living in a large city will do that to a conservative.

The problem is that the boundaries are so obviously contrived to such a degree that even Alito couldn’t accept them. There is a simple solution — let a computer allocate the districts by drawing them such that all districts have equivalent population and the total boundary length (over the whole state) is minimized. You could pass a state law to implement that. Then it will never be an issue again.

The problem is that the boundaries are so obviously contrived to such a degree that even Alito couldn’t accept them.

On the contrary, political gerrymandering has been before the court several times over the last 200 years, and it has never had a problem with it before. He turned this down because SCOTUS has to accept state supreme courts’ interpretation of their states’ laws, and the numbers aren’t there to overturn it on the dubious grounds that the US constitution gives state legislatures the authority to decide the time, place, and manner in which congressional elections shall be held (subject to Congress’s override).

State Supreme Court declares, based on precisely no reason anyone can identify, that the districts they drew somehow violate the State’s Constitution, and declares that if they aren’t redrawn to their liking that they will take it upon themselves to redraw them.

So, no matter what, the districts will be drawn how the Court, which has zero authority to redistrict, prefers. The legislature will either redraw them to the Court’s specifications or the Court will, themselves, draw them that way. And, of course, it will simply by partisan gerrymandering being done by the politicians sitting on the Bench. There will be NOTHING “fair” about it. It will be done in a way that will benefit Democrats as much as possible.

*or, I would if I were a Dictator, I mean, a State Supreme Court Justice.

This is simply a blatant power grab – a usurpation of the legislature’s clearly defined Constitutional authority by the court.

It’s not as if nobody can identify the reason; the plaintiffs briefed several reasons, so it stands to reason that it’s one or more of those. And it is the state supreme court’s role to interpret the state constitution, including the general provisions that require fairness and equity and all that other nonspecific stuff.

The US constitution has the 14th amendment which also imposes these nonspecific requirements, and the state court could have struck down the districting on that basis, but then the federal courts could get involved, and SCOTUS has already said many times that while the 14th requires states to draw their congressional districts with roughly equal populations, and forbids them from gerrymandering the districts for the purpose of reducing the political clout of racial minorities, it doesn’t forbid doing so for partisan political purposes. So the PA court couldn’t say it does; but it can say that similar provisions in the state constitution do forbid it.