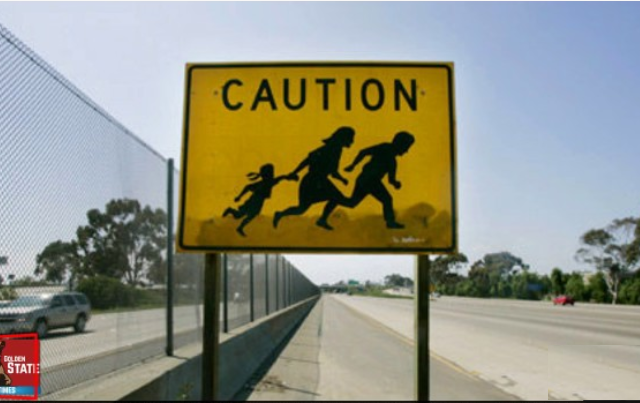 President Donald Trump and Congress are preparing for another round of negotiations over Deferred Action for Childhood Arrivals (DACA), this time without the national budget being held hostage.

The program expires March 5, leaving the nearly 2 million people eligible for DACA vulnerable to deportation, unless Congress acts on immigration reform and secures them legal protection.

President Trump and most Americans say they support the DACA people being permitted to stay and apply for citizenship. An immigration plan by the White House is offering a path to citizenship for almost all of them, so long as Congress also passes funding for a border wall, ends the visa lottery, and sharply limits chain migration to only spouses and their children.

As the stage is being set for another round of DACA drama, an iconic symbol of illegal immigrant crossing has disappeared from the U.S.-Mexico border.

The “immigrant crossing” signs have become obsolete, said Cathryne Bruce-Johnson, a spokeswoman for Caltrans. The transportation department stopped replacing the signs years ago because it constructed fences along medians to deter people from running across highways.

The last sign, which stood on the side of Interstate 5 near the San Ysidro border crossing, vanished in September.

The sign’s image was once a source of controversy.

Justin Akers Chacón, a professor of Chicano studies at San Diego City College, said critics of the sign’s imagery felt that it dehumanized migrants by likening them to animals.

Critics also were bothered by the way the sign’s message fit into the immigration enforcement system.

“The deaths of migrant crossers was treated as an acceptable consequence of the enforcement model, not a reflection of the failure of the model,” Akers Chacón said.

An early version of the sign was entirely text: “Caution watch for people crossing road.”

Motorists weren’t able to read and process that sign quickly enough, so Caltrans asked artist John Hood to design an image to convey the message.

A look at the numbers of attempted illegal border crossing indicate there is no “surge” as DACA talks continue, though officials indicate the numbers are still too high.

“Once again, this month we saw an unacceptable number of UACs and family units flood our border because of these catch-and-release loopholes,” said acting Homeland Security Press Secretary Tyler Q. Houlton.

Those categories are the most difficult to deal with, since they are able to take advantage of lax U.S. laws and court decisions that require they be let into the country — a process those on the border call “catch-and-release.”

As DACA negotiations continue, it is interesting to note that it was the construction of physical barriers that made the iconic illegal immigrant crossings sign obsolete.

What a sad commentary they are – that they ever existed, or were ever needed in the first place………….

An unconstitutional memo….yet, Trump wants to “fix” it.
Insanity.

Yes Trump has a 4 tier plan, one being….
They need to be “worthy” no criminals, have skills or education, then…
They get in line. A process that he has stated to take 12 yrs

They can move them to Vermont now.

Positive Progress? Not to be confused with Planned Parenthood.

There needs to be emigration reform (e.g. resolution of CAIR, labor arbitrage, democratic gerrymandering), and immigration that does not exceed the rate of assimilation and integration before selective and recycled-child.

Cal Agricultural Checkpoint inspectors will detain motorists without warrant and toss their car if they suspect them of illegal fruit importation. I had an inspector freak out on me (spittle laced – red faced tirade) because I didn’t declare import of a fake paper ficus tree as I entered Ca. from Oregon just after Xmas. Seriously. The inspector was unhinged and screaming at me. My 47 yo sister literally turned white from fear.

This is very simple: with obama and klinton gone, the democrats in the minority and with the rats GOPe tamed, just flip the signs in their opposite direction.

Reminds me of the joke about why Mexico didn’t send a team to the 1984 Summer Olympics in Los Angeles. The reason: every Mexican who could run, jump or swim was already there.

I’ve lived in San Diego all my life. The Illegals used to bunch up and do a mass-rush for the border. The result was traffic deaths, disruption of flow, and huge BP costs. Much better today, why? A F*ccking fence and better-controlled entry points

i always wanted to add point values to the sign…

yeah, i’m more than a bit tired of illegals here in #Failifornia… why do you ask?