“by far the biggest single group of unsheltered people in any U.S. city” 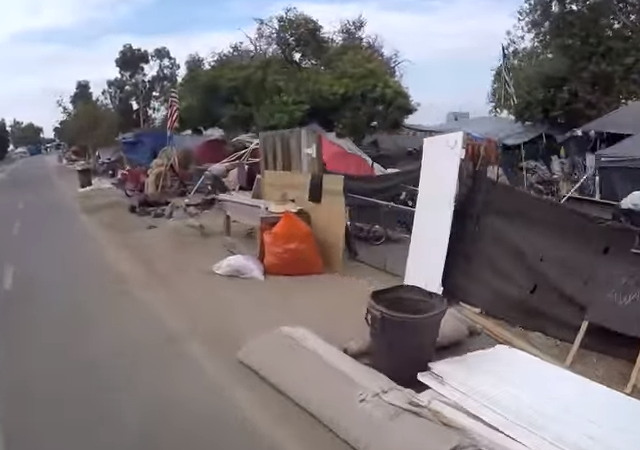 California has established itself as the state leader of the anti-Trump resistance. It has declared itself a sanctuary state and continually pushes for far left policies like single payer healthcare. Yet California’s own house is in disorder. Los Angeles has a homelessness crisis in its midst.

L.A.’s homelessness surged 75% in six years. Here’s why the crisis has been decades in the making

Some of the poorest people in the city spend their days in the shadow of Los Angeles City Hall, napping on flattened cardboard boxes.

On any given day, as many as 20 people take to the City Hall lawn, across the street from LAPD headquarters. They’re there to “escape the madness” in downtown streets, a 53-year-old homeless man named Lazarus said last week. At night, they fan out to doorways or deserted plazas to wait for daybreak.

The growth of a homeless day camp at the halls of civic power speaks to the breadth of Los Angeles’ burgeoning homelessness problem.

The number of those living in the streets and shelters of the city of L.A. and most of the county surged 75% — to roughly 55,000 from about 32,000 — in the last six years. (Including Glendale, Pasadena and Long Beach, which conduct their own homeless counts, the total is nearly 58,000.)

Three out of four homeless people — 41,000 — live in cars, campers, tents and lean-tos, by far the biggest single group of unsheltered people in any U.S. city. If you took out Los Angeles, national homelessness would have dropped last year for the first time since the recession…

The problem has only gotten worse since Mayor Eric Garcetti took office in 2013 and a liberal Democratic supermajority emerged in 2016 on the county Board of Supervisors.

Tent cities stretch from the Antelope Valley desert to the Santa Monica coast, with stopovers in unlikely communities — even Bel-Air, where a homeless cooking fire was implicated in December’s Skirball fire.

To truly get a sense of how huge the problem is, take a look at the video below which was taken in August of last year. Two men on bicycles ride through a homeless tent city in Anaheim, outside Los Angeles. The video is six minutes long and the homeless camps just go on and on.

If you think any of this has caused California to re-think any of its policy positions, guess again. They’re planning to push even further to the left. Scott Wilson of the Washington Post:

Think California politics is on the far-left fringe? Just wait for the next elections.

For those who think California politics is on the far-left fringe of the national spectrum, stand by. The next election season, already well underway here, will showcase a younger generation of Democrats that is more liberal and personally invested in standing up to President Trump’s Washington than those leaving office.

Here in the self-labeled “state of resistance,” the political debate is being pushed further left without any sign of a Republican renaissance to serve as a check on spending and social policy ambitions. Even some Republicans are concerned about the departure of Gov. Jerry Brown (D), who proved to be fiscally cautious after inheriting a state seven years ago in deep recession.

The race to succeed him, as well as contests for U.S. Senate and statewide offices, probably will feature a November ballot exclusively filled with Democrats. The top two primary finishers compete in the state’s general election regardless of party, setting up several races between the Democrats’ left and even-more-left wings in the nation’s most-populous state, races that could signal the direction of the party’s future.

Perhaps California should fix its own problems before lecturing the rest of the country on things like immigration and spending.

notamemberofanyorganizedpolicital in reply to Whitewall. | February 6, 2018 at 2:27 pm

Obama was a Leftist.

Whatever Obama touches turns into……….

Given the trajectory of the state I won’t be surprised if the solution the intellectual elected class of the state chooses is to make the guaranteed minimum income a statewide action and not just one city. That’ll solve the homelessness….right?

$500 per month should be enough to buy them a bottle of hard booze each day. They will feel much warmer and content under the freeway bridges.

Reminds me of a South Park episode. “California-ya-ya, really nice to the homeless.”

Another point I did not know; the top two primary finishers end up on the general election ballot, regardless of party? For governor, senators and representatives? That is probably a huge reason why the entire state is sliding off the left side of the political spectrum.

How many are “traditional” homeless and how many are people who have been forced out of their homes by foreclosure, employers moving out of state and, frankly, California’s leftist policies.

Most are traditional homeless. People, who are “forced” into homelessness, are there temporarily.If a long term lack of job prospects occurs, they simply leave the state to find jobs elsewhere, they do not sit around camping on the side of the road.

Actually, many of the “traditional” homeless have a source of income, SSDI and various state welfare benefits, all of which are portable. Several of these people could band together, pool their resources and obtain conventional lodging. But, they do not, simply because they are technically incompetent.

The “homeless problem” was created by the liberal policies of the late 1970s. During that time, activist judges made it illegal to institutionalize the mentally ill, on a long term basis. The liberals believed that doctors could sprinkle fairy dust over these people, in the form of various psychotropic “medications” and they would be instantly cured and able to claim their place in society. Instead, they were still as disturbed once released as they were when they were institutionalized. And, to make matters worse, they further fueled the illicit drug industry. Local and state communities attempted to control this problem, but liberal jurists ruled that enforcing state laws and local ordinances against the homeless [such as sleeping in the open, trespass in public facilities, and urinating and defecating in the open] were somehow all unconstitutional.

Being the liberal Mecca that it is, urban Kalifornia has created a safe space for the mentally ill and chemically dependent homeless. It has created its own slums and they are simply increasing.

There are so many ways those who find themselves with financial problems can be homeless only temporarily in CA. These homeless are not those. In OC, we have the most amazing rescue mission – it is huge and beautiful. BUT, they have rules. Homeless that come by our church NEVER want help, just cash. It is shockingly worse!

“Wherever there are Mexicans, there is Mexico” – Felipe Calderon, president of Mexico

“Wherever there are Mexicans, there is Mexico” – Felipe Calderon, president of Mexico

Of course quite a few of the homeless are our very homemade bums, but the character of the state has been fundamentally transformed. They got what they wanted…. they will blame anyone and everyone else for it.

remember the complaint about hillary winning the popular vote ?

if we did not have the electoral collage to balance out the interests of small states over large, we would have a 1 state country dominated by the left coast.

thank g-d for the wisdom of the founders!

which is why we are NOT a democracy but a REPUBLIC.

to see what happens to countries which adopt CA values, just look at europe’s dysfunctional politics.

I live this! Not as bad as in the video but the homeless population has soared where I live in San Jose over the last two years! It is now common to see panhandlers at intersections and homeless sleeping in neighborhood walkways. The mentally ill ones rage at unseen adversaries while I go to the grocery store. We never had these problems before! My neighborhood has had to become very pro-active to protect ourselves from the homeless “invasion” – and now my city wants to place 20 ”tiny homes” for the homeless near where I live? A drop in the bucket for housing in an area will no services. However Google has moved offices to downtown San Jose (where services are) and the homeless don’t look good there anymore.

I absolutely agree California should fix her own problems and not lecture the rest of the country! But common sense has fled the state and as soon as I am able so will I.

Seems there may be a new similar tiny-house community near Ithaca? Am I recalling that correctly?

There were about 2 million homeless during the Great Depression, in a country with a population of about 125 million. That’s 1.6% of the country.

I’d be homeless too if I had to pay those taxes.

There was a ironically sad article a few months ago – local resident before some board gingerly complaining that while he embraces the homeless issues, they started a fire that burned his house down and now he’s homeless too.

Gee ,I expected the massive homeless stories to start three weeks after the Trump inauguration in the liberal rags .
I hadnt seen any since the later Bush years.

The US would be far better off if California seceded