Israel returns the man, in contrast to the mentally ill Israeli men being held captive by Hamas in Gaza 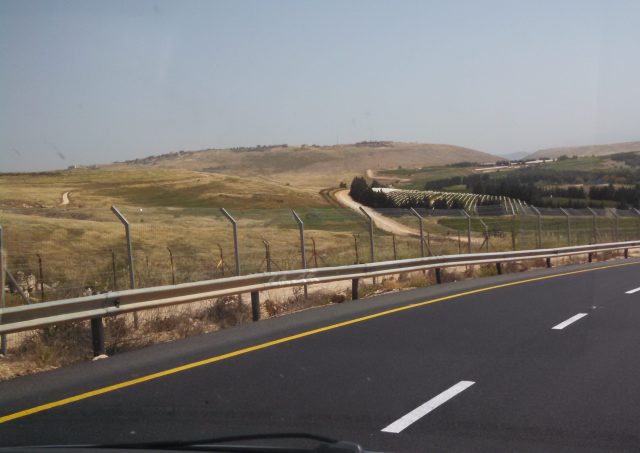 On Tuesday February 13 the Israeli army repatriated a mentally unstable Lebanese man after he infiltrated Israel by crossing the border fence over the weekend.

According to multiple Israeli media reports, the Lebanese national was detained after allegedly being coerced by members of the Hezbollah terror group, who threatened to have him committed if he didn’t do what they demanded.

This shameful incident was reported in multiple Israeli English-language media outlets. But as best I can tell, the MSM never reported on it. That’s too bad, because what happened reveals a lot about Israel, the practices of its armed forces, and the behavior of the enemies arrayed against it.

Below I summarize the incident and offer three takeaways.

Last Sunday, an IDF patrol captured an intellectually impaired man who had crossed the security fence from Lebanon into Israeli territory. According to media reports, the man was under constant surveillance before he entered the country and was detained immediately after crossing the border.

During questioning, the man—Ali Mari—told security officials that he had been “pressured by Hezbollah” to undertake the crossing.

Specifically, Mari said that two operatives—brothers Mehdi and Ali Shahrur from the Lebanese village of Habush—wanted him to “check the electrical fence’s permeability” (it was Mehdi Shahrur who brought Mari to the border on a motorcycle). 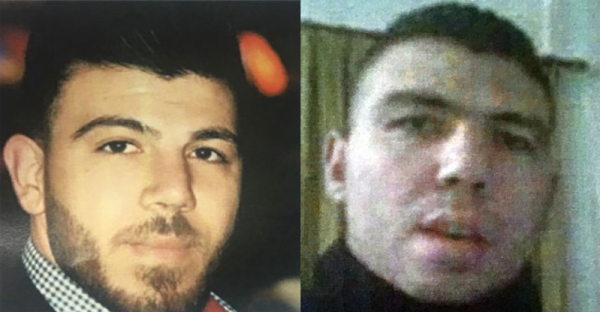 [Hezbollah operatives who the IDF says pressured a mentally ill Lebanese man to cross the security fence into Israel on February 11, 2018 | credit: Times of Israel]

Mari further told the Israeli interrogators that the two brothers had threatened him with “forced hospitalization” if he refused to follow their orders.

According to an IDF statement, Mari was meant to infiltrate Israel in order to do reconnaissance of IDF security arrangements, namely to “test the difficulty” of entering and leaving the country. He was also supposed to see whether the electric fence is intact. 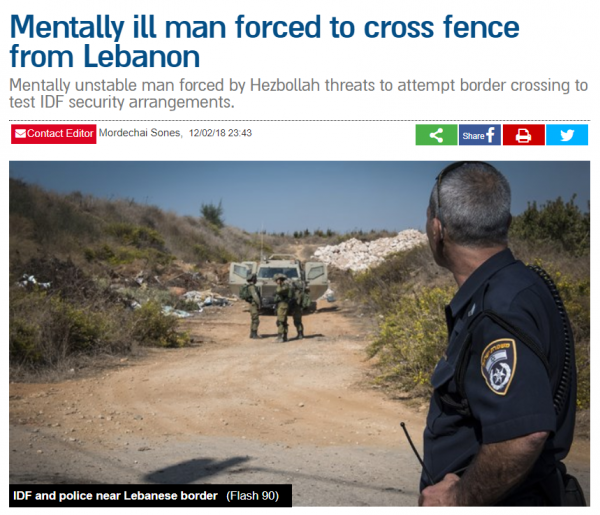 Mari was reportedly returned to Lebanon shortly after his interrogation ended on Monday.

This wasn’t the first time that he entered Israel. Last May, the unarmed Mari was also detained by Israeli police in the bus station of Kiryat Shmona—an Israeli town about two miles from the Lebanese border.

The IDF later learned that Mari had been able to infiltrate Israel on his own volition and undetected by crossing through a small Israeli community that abuts the security fence. Israel cooperated with the United Nations Interim Force in Lebanon (UNIFIL) to have him transferred back through the Rosh Hanikra crossing. 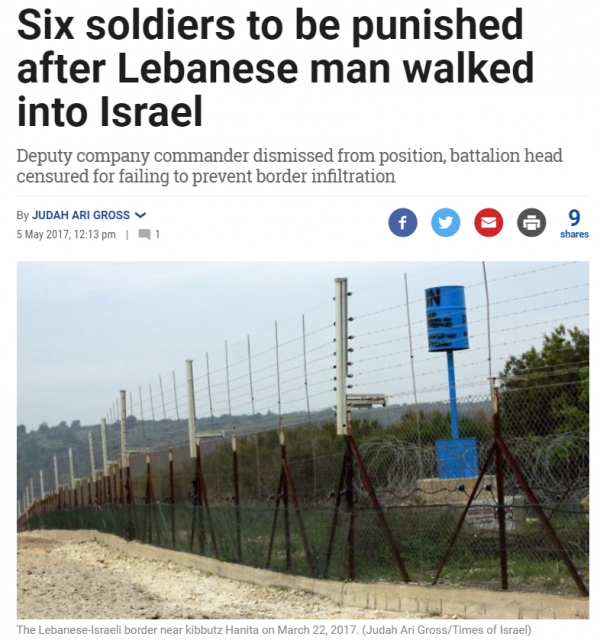 So then too Mari was returned to his family soon after questioning and reportedly wasn’t mistreated in any way while in IDF custody.

There are at least three things we can learn from this incident about Israel and her enemies.

In its statement about this week’s Hezbollah operation, the IDF pointed to the fact that the terror organization will not hesitate to “abuse” the Lebanese civilian population for its own ends.

Indeed, this case demonstrates that even a vulnerable group of civilians like those suffering from mental health issues are expendable and will be put into service for the cause of Israel’s demise.

Threatening a mentally ill individual with forced institutionalization and thereby coercing him into an unlawful and highly dangerous situation ranks up there in terms of the kinds of heinous violations of international humanitarian standards that are routinely employed by anti-Israel terror groups, including using civilians as human shields.

Experts (see, for example, here and here) maintain that Hezbollah likely prefers to avoid an escalation on Lebanon’s border in light of the country’s upcoming parliamentary elections.

But this incident with Mari suggests that Hezbollah will nonetheless in the meantime continue to test Israel’s defenses in preparation for a future war, which Israeli security officials believe is likely to involve “bringing the fight to the home front” by infiltrating Israeli communities along the border with Lebanon and killing or kidnapping civilians and soldiers. 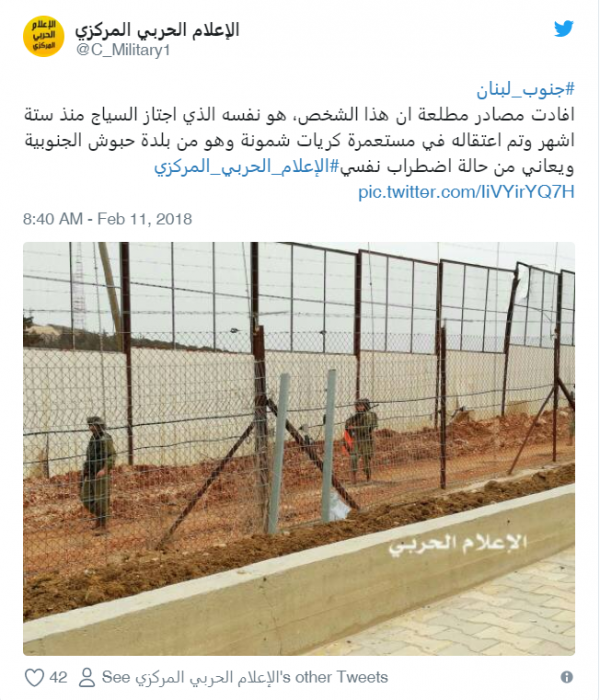 Bottom line: In preparing for future ground attacks against Israel, Hezbollah will have no qualms in placing Lebanese civilians—including the most vulnerable among them—at risk and putting them into harms way.

It’s not surprising in the least that Mari was returned to Lebanon so quickly. That’s exactly the kind of behavior that’s to be expected from an armed force which tries to avoid causing harm to innocent civilians, as required by international law.

The IDF is widely acknowledged to be in compliance with the laws of armed conflict (LOAC) in terms of protecting civilians during military operations.

As we noted in a prior post, for example, multiple third-party investigations have concluded that during the 50 days of hostilities between Israel and Hamas in the summer of 2014, the IDF was

neither callous nor oblivious to the humanitarian needs of the Palestinian population in Gaza. It was a model army that was forced to fight an immoral terrorist organization that sought to endanger Israeli and Palestinian lives.”

Basically, these studies and reports underscore that the IDF went well beyond its obligations to limit civilian casualties while attempting to achieve the mission’s objectives, The Truths of the Gaza War Revealed.

So given the IDF’s commendable record of attempting to protect the lives of civilians in war zones, its decent treatment of Mari isn’t really all that remarkable.

Bottom line: Terror organizations like Hamas and Hezbollah routinely disregard the safety of civilians while capitalizing on Israel’s effort to comply with the law.

It’s worth comparing Mari’s treatment by the IDF to the despicable ways in which anti-Israel terror groups have treated Israeli civilians in their custody—including those who, like Mari, are known to be mentally impaired.

As we highlighted in a prior post, for over three years Hamas has been holding in captivity a mentally ill Ethiopian Jew, Free Avera Mengistu – Mentally disabled Israeli captive in Gaza (in addition to Mengistu, two other Bedouin Israeli nationals, who also have intellectual disabilities, are being held as hostages there too). 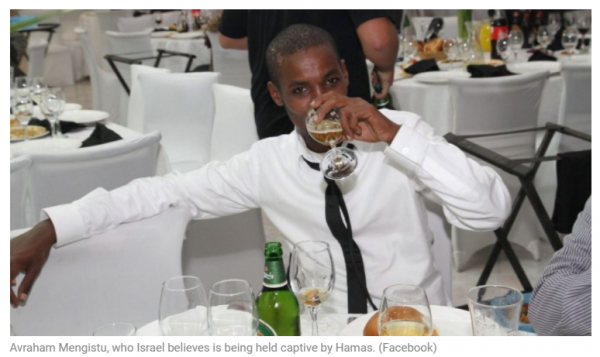 Hamas has refused to allow Mengistu or the other men to communicate with their families and has also denied International Red Cross requests to meet with them.

All efforts to ascertain the whereabouts and well-being of these Israeli captives have been rebuffed.

As we discussed in our post, for years the Mengistu family have been trying to raise awareness of Avera’s plight. A 31-year-old Israeli who suffers from a mental disorder and was institutionalized twice for psychiatric treatment, Avera left his family home in Ashkelon and wandered into Gaza back in September 2014.

Basically, he did what Mari did last spring: he walked into enemy territory of his own volition for reasons that only his own troubled mind could comprehend.

But unlike the IDF, which detained Mari for only a short time before sending him home to his family safe and sound, Hamas nabbed poor Avera Mengistu and have yet to let him go.

So for more than three years, Hamas has refused to return Avera Mengistu to Israel. He’s a civilian who is clearly in need of medical attention, yet Hamas continues to refuse Red Cross mediation. This is “cruel abuse” of an impaired and unwell man’s human rights. It’s an unbelievably long time for his family to suffer such “unbearable pain”. 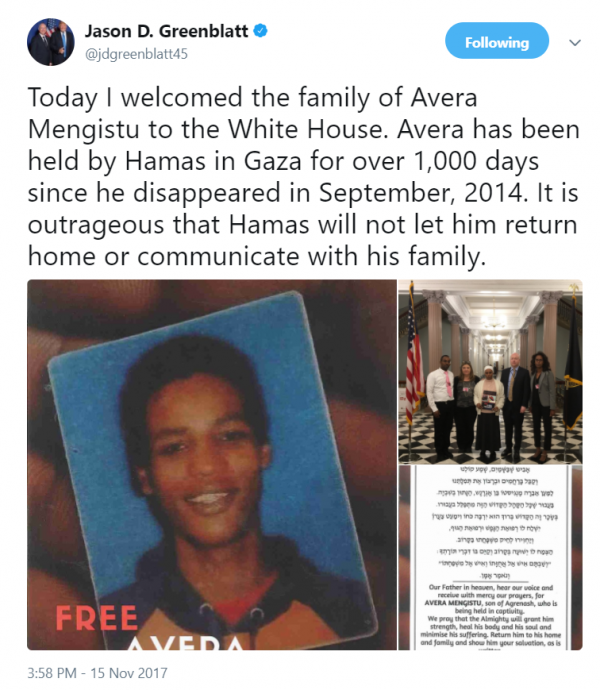 Bottom line: Hamas’s mistreatment of a group of mentally ill Israeli civilians who are being kept hostage in Gaza is more evidence of the depraved and reprehensible inhumanity of the radical Islamist terror organizations sworn to Israel’s destruction.

This past weekend—at roughly the same time as two Iranian-backed Hezbollah operatives were abusing Ali Mari, a Lebanese man who suffers from severe mental health issues—the Middle East was “on the brink of yet another war.”

The weekend series of “escalation dynamics” began with an unprecedented provocative move on the part of Iran in the predawn hours of February 10, DEVELOPING: Israel intercepts Iranian drone, attacks Iranian air base in Syria, F-16 downed over Israel.

As we highlighted in our prior post, it was the first time that a UAV under direct Iranian control penetrated Israeli airspace.

So this weekend’s “chain reaction” started with the field testing of a new Iranian Simorgh-type drone (based on a reverse-engineered U.S. model that fell into Iranian hands back in 2011). Then, an Israeli F-16 jet was shot down over Israeli territory by a Syrian SA-5 missile—the first time an Israeli plane was lost in combat from enemy fire in over three decades.

Also exceptional were the subsequent first-ever Israeli airstrikes on Iranian targets in Syria along with the largest set of retaliatory strikes against Syrian air defenses and its anti-aircraft batteries since the 1982 Lebanon war.

In the grand scheme of things, given these numerous unprecedented events, the “shift to open fighting” between Iran and Israel and the “potential for war”, not to mention the production facility for advanced missiles that Iran is building in Lebanon, maybe Hezbollah’s horrible mistreatment of Mari isn’t so significant.

On Saturday, Iran launched 1st direct military operation against Israel. Iranian presence in Syria is leading to war. In Syria, Hezbollah says it has 10,000 fighters ready to attack Israel. Hezbollah has 150,000 rockets in South Lebanon pointed at Israel, paid by Iran. pic.twitter.com/KOShxNIx7H

But that’s the wrong way to look at it.

In fact, what happened to Mari matters because it provides important insight into the nature of Iran’s terrorist proxies, and the extent to which they now feel emboldened to challenge Israeli sovereignty and security. It also indicates their determination to test Israeli defense and red lines.

The MSM should’ve covered this incident.

We didn’t need this incident to underscore what is already patently obvious to anyone possessing a modicum of rationality and objectivity — there is no equivalence between the IDF’s conduct as it attempts to defend Israel against unrelenting Islamic supremacism and belligerence, while adhering to international norms, and, the underhanded, savage and cruel behavior of Hamas, Fatah and Hezb’allah, who have no qualms about exploiting and sacrificing their own people to serve the ultimate aims of the jihadist imperative.

Any person who attempts to either draw a moral equivalence between these parties, or, to disparage the IDF, while rationalizing the perpetually belligerent conduct of the Islamic jackboots, deserves the harshest condemnation and isn’t to be taken seriously.

They have a lot of class, these Hezbolah savages, don’t they?

“The MSM should’ve covered this incident.” They did cover it Miriam: they covered it up.

This is another reason why to presume the truth of the reports of the utterly perverse and tragic use of the retarded, the autistic, the seriously handicapped children taken from their families, taken and/or recruited from their families in Iran, to serve as living mine sweepers during the Iran-Iraq war. They were given toy plastic keys to wear around their necks as they rolled through the mined lands, waited for their promised trip to heaven. The Basiji youth forces.

Islamic terror groups have a long history of using the mentally ill, the terminally ill (the driver of the truck bomb that blew up the Marine barracks in 1982 was dying of cancer), and children to carry out their atrocities.