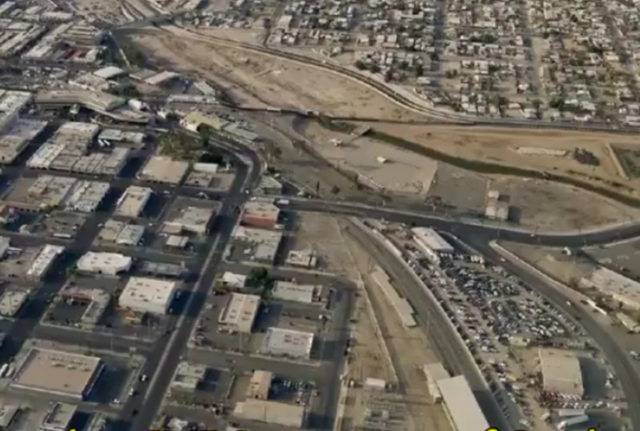 The first contact for the border wall has been awarded, and work on the project has begun.

The federal government began work Wednesday to replace a section of border wall in California, the first wall contract awarded in the Trump administration outside of eight prototypes that were built last year in San Diego.

Customs and Border Protection is replacing a little more than two miles in downtown Calexico, a sliver of the president’s plan for a “big, beautiful wall” with Mexico. A barrier built in the 1990s from recycled metal scraps and landing mat will be torn down for bollard-style posts that are 30 feet high, significantly taller than existing walls.

The administration is seeking $18 billion to extend the wall. Efforts to pay for it as part of a broader immigration package that would include granting legal status for people who came to the county as young children failed in the Senate last week.

Calexico is about 120 miles east of San Diego. SWF Constructors of Omaha, Nebraska won the contract for $18 million for their work. The project, which includes a bridge over the river, is expected to take 300 days.

The administration cleared the way for construction in September by waiving dozens of environmental and other reviews in Calexico. A 2005 law exempted it from environmental reviews if the Homeland Security secretary deems a wall to be in national security interests, including the National Environmental Policy Act, Clean Air Act and Endangered Species Act.

The Trump administration has also issued waivers to build in San Diego and Santa Teresa, New Mexico. George W. Bush’s administration issued the previous five waivers, allowing the government to quickly extend the wall to nearly one-third of the border without legal challenges that can block construction or cause major delays.

Had a couple of these characters in the back say, oh, he really doesn’t want the wall. He just used that for campaigning. I said, are you — can you believe it? You know, I say every time I hear that, the wall gets ten feet higher, you know that. Every single time. Okay. Now, we’re going to have the wall. Or they’re not going to have what they want. We have a problem. We need more Republicans. We have a group of people that vote against us in a bloc.

To paraphrase: “lead, follow, or rinos get out of the way.

Build it, so they don’t come.

Customs and Border Protection is replacing a little more than two miles in downtown Calexico … The administration is seeking $18 billion to extend the wall.

$18B for two miles? I hope they have bigger plans than that. Nine billion a mile is a bit steep … by about three orders of magnitude, maybe.

The Mexicali side of the border has a divided highway butted up against the present fence. The American side is more sparsely settled, but still pretty close quarters for a 30 foot wall.

Calexico has a Walmart Supercenter. Mexicali has a Costco Wholesale. I suppose that will have to do.

SWF Constructors of Omaha, Nebraska won the contract for $18 million for their work.

Another promise kept? Oh like the promise to amnesty 1.8 million illegals? Or the promise to jump on board with gun control? Or did he say “your guns are safe” I’m not sure anymore because he’s flip-flopped on so much. What happened with the “dumb” deal with Australia to bring the rejected refugees over here? Oh that’s right, they’re STILL coming. What happened to the designation of the Muslim Brotherhood as a terrorist organization? Oh yeah, it hasn’t happened!
And you know WHY he’s able to flip flop on policy issues? Because of IDIOTS who like Cult members continue to support him while he flip flops. Instead of holding his feet to the fire and showing him that in order to continue to keep the support of his voters he must DO what he PROMISED he was going to do, you let him know that it was OK to basically lie during the campaign to get elected. You let him know that it was fine to amnesty instead of deport illegals so why the hell should the wall be any different? 2 miles of Wall isn’t border security and Donald Trump HAS NOT “kept his promises.”

So far so good.
Not Hillary
Judges

Because every other candidate would have done better.

Actually, Cruz was the only possibility.

Let’s return the to real world, and leave the fantasy world of anti-Trumpers.

The first thing that people have to understand us that Trump was not elected all-powerful dictator of the world, or even the US. There is only so much he can do on his own. And, as we look at the regulations rescinded, the illegal immigration programs suspended and the economic and and trade agreements and practices modified or eliminated, we see that Trump has kept many of his promises.

As to his “amnesty” for 1.8 million illegal aliens, This offer was made with the stipulation that portions of the existing immigration situation, which he apparently feels are more important for the long term, be met by Congress. This may not be in keeping with Trump’s election rhetoric, but in politics, as in war, things change. Also, the possibility that this offer was made knowing that the Democrats would reject it, thereby creating the optics that the Dems really do not care about the DACA recipients.

Any claim that he made that guns were safe [something that I do not specifically recall] still stands. Nothing has changed even after the LV shooting and now Parkland. I would wait before I declared a reversal here.

The Australia deal is simply the continuation of the existing deal which the United States of America made with Australia under the Obama administration. As much as an incoming President might like to scrap every deal made by his predecessor, sometimes legal and political concerns do not allow that. In this case, honoring the commitment made by Obama reinforces the idea that the US will honor its commitments, especially when doing so does not harm the country in any significant manner.

Designating the Muslim Brotherhood was publicized at the beginning of February. It has been only some 25 daysa since this announcement was made. These things usually take time because of inertia in federal bureaucracies, such as the State Department. Patience grasshopper.

As to building a wall some 1000 miles in length, this is not going to happen over night. It takes the government a year to repave 10 miles of existing interstate. Also, there is a little matter of funding. Contrary to the opinion of Obamaphone recipients, the President does not have a “stash” of cash to spend building walls. This has to be allocated by the [dum, dee, dee, dum] the CONGRESS. Yes, the people who have actually been lying to their constituents everyday of their political careers.

Perhaps the quoted wording is simply unfortunate? There are certainly legal challenges, just perhaps not under the environmental review system.

With Obama judges, the fact that the law says President Trump can do something doesn’t matter. And they know this.

Curiel, who was forced out of his home and needed around-the-clock protection when he prosecuted Mexican drug kingpins in the 1990s

Hmmm….. That he is still alive after jailing Mexican drug kingpins and yet … fighting the idea of establishing meaningful protection from brutal cartels being able to freely cross the border…. it causes me to wonder.

“The administration cleared the way for construction in September by waiving dozens of environmental and other reviews in Calexico.”

The resulting deluge of leftist tears could end the drought in California – if they weren’t so caustic.

In the meantime, Trump should declare only California as a temporary s sanctuary state with intense ICE operations for rest of country…..flood California with illegals and break the systedm.