“Just last week, however, you backflipped and said, I quote, “I do not know if the President is having an affair.” Do you owe the President and the First Lady an apology, Mr. Wolff?” 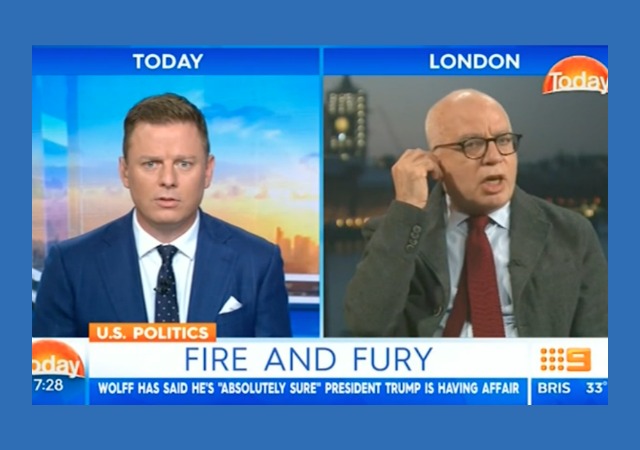 Wolff was able to hear interviewer Ben Fordham just fine until Fordham asked about Wolff’s allegations that Trump was having an extra-marital affair.

“You said during a TV interview last month that you are absolutely sure that Donald Trump is currently having an affair, while President, behind the back of the First Lady. I repeat, you said you were absolutely sure,” said Fordham. “Just last week, however, you backflipped and said, I quote, “I do not know if the President is having an affair.” Do you owe the President and the First Lady an apology, Mr. Wolff?” asked Fordham.

Though his earpiece had been working just fine for 4 and a half minutes of the segment, Wolff claimed he could no longer hear Fordham. Amazingly, despite Wolff’s insistence he was unable to hear Fordham through the earpiece, Wolff answered Fordham when he asked if he could hear him.

The interview here (Wolff begins his exit around 4:28ish):

LISTEN – This is what Michael Wolff was HEARING in his earpiece when he claimed he couldn’t hear my question on @TheTodayShow this morning. pic.twitter.com/dl3ZvQfKWm

Anti-Trumper’s have touted Wolff’s book as the ultimate insider account, and proof that Trump is everything they’ve claimed. There’s just one tiny little problem though, Wolff himself acknowledged that portions of his book aren’t true.

I blogged in January:

Fantastical tales of a White House in disarray, administrative turmoil, and anecdotes aplenty meant to justify Trump’s “unfitness” for the Oval Office made for some captivating reading.

Immediately, certain parts of the story were called to question as they didn’t hold up to basic fact-checking, begging the question: How much of “Fire and Fury” is true?

Wolff himself isn’t entirely sure all parts of the book he’s peddling as the ultimate insider account of Trump’s first year are actually true. In fact, he knows some of his sources were telling tall tales, yet chose to include their stories anyway.

The author of the explosive new book about Donald Trump’s presidency acknowledged in an author’s note that he wasn’t certain all of its content was true.

Michael Wolff, the author of “Fire and Fury: Inside the Trump White House,” included a note at the start that casts significant doubt on the reliability of the specifics contained in the rest of its pages.

Several of his sources, he says, were definitely lying to him, while some offered accounts that flatly contradicted those of others.

But some were nonetheless included in the vivid account of the West Wing’s workings, in a process Wolff describes as “allowing the reader to judge” whether the sources’ claims are true.

In other cases, the media columnist said, he did use his journalistic judgment and research to arrive at what he describes “a version of events I believe to be true.”

“Allowing the reader to judge”? What is this, a Choose Your Own Adventure book?

If Wolff had an ounce of integrity, he’d have taken the opportunity given to him by Fordham to set the record straight on the matter of the Trump affair allegations. Instead, Wolff ran off the set. Intrepid journalist, indeed.

The Wolff that cried wolf
…..far too many times…..

It must be a Leftist, Democrat Contest……

“David Hogg…..Defending the Officers That Stood Outside the School and Permitted His Classmates to be Shot”

“The Parkland, Florida mass shooting and the politicization of same in the over 200-year long battle to disarm the citizenry and impose an anti-American tyranny remains our lead story.

“Lots of great links further exposing Sheriff Steve Israel as a Democrat partisan hack, a policy that placed Leftist politics and social engineering above law enforcement and protecting the citizenry in Broward, an effort to smear, demean and destroy kids and parents critical of the latter while using what appear to be willing teenagers eager to whore for the media and mouth the lyrics of the the anti-NRA, anti-Trump and anti-Constitutional tune called by their Leftist overlords and child-abusers.

“And this David Hogg dork is getting on my nerves. I didn’t know that grieving over one’s slain friends means showboating for the TV cameras, but hey, what do I know?

“……you’ll see the liberals are attacking …for “attacking a kid” for merely pointing out the kid is spreading #FakeNews. The left has decided that it will use these Precious Little Propagandists to peddle lies the adults can’t quite get away with, and then when you point out that they’re lying, they’ll attack you for “attacking a kid.”

“All these kids are eating up all this Liberal Media attention. They don’t look so sad.

“That feeling when you get famous because all of your classmates died.

Anyone else think it’s weird how happy these kids are?” – Collin Rugg

“And this David Hogg dork is getting on my nerves.

I’m still looking, does anyone know if he was even in the same building as the shooter or was he hiding in the closet at a different building?
He’s a good poster boy for raising the voting age to 70 though.

This is hilarious, one for the books.
Maybe Guinness record for most pathetic scoundrel?

If Wolff had an ounce of integrity

(are there still phone directories? )
https://upload.wikimedia.org/wikipedia/commons/9/9e/Telefonkatalog_1928.jpg

sorry if this is a duplicate posting

Sorry, the Left measures their integrity in milligrams. Sometimes micrograms, or even parts per billion.

“Did you just hear that?”

“I didn’t hear that one either”

As the rapidly-Nazifying fascist-Left continues spiralling a Marxist-Institute/Frankfurt-School-death-blow-delivered cynically “multiculturalised” & “politically-correct” Australia into the third-world, its Fascist Media hack scornfully derides what he calls “America’s addiction to guns.”

Although the “immigration” services had already been weaponized against Australia and Australians and had for years been aiding and abetting an invasion by scores of thousands, many of them unassimilable third world savages , the little fascist, John Howard, having (via what Howard, fraudulently, called a “gun buy-back”)** confiscated Australia’s privately owned weapons. This just before the big fascists, Kevin Rudd and Julia Gillard, incited, encouraged and facilitated a massive invasion by scores of thousands of “boat people,” almost every one of them a strapping middle-eastern/moslem male aged between 18 and 45.

It’s my bet: New York City to a single brick; that every Australian then alive will have occasion to rue that Howard got away with stripping away from Australians their ability and never mind their absolute RIGHT to defend themselves. While in the meantime We, The Sovereign American People, will continue to be so, protected by our beloved fraternal republic’s founding Law, whose provisions include that our (God given) right to own and bear arms, SHALL NOT BE INFRINGED!

**Back, finally, to the the little fascist, John Howard.