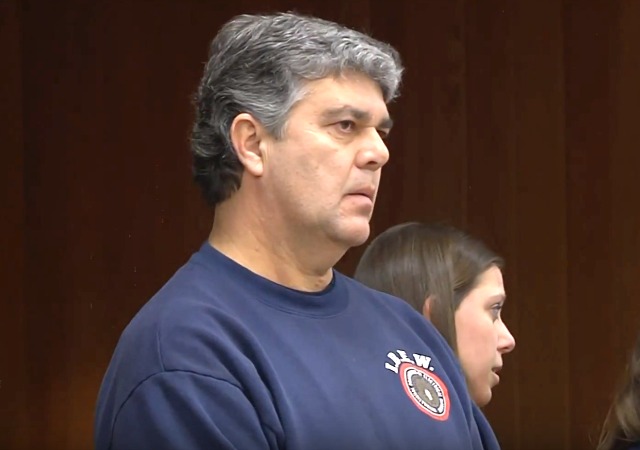 A father of three girls who accused Larry Nassar of sexually assaulting them attacked the doctor on day two of sentencing. From WXYZ:

The man, identified as Randall Margraves, asked the judge if a “distraught father” would have a chance to say something after his daughters, Madison and Lauren, spoke.

He started off by saying “you son of a bitch” and then the judge told him not to use profanity. He also asked the judge to give him five minutes locked in a room with Nassar.

When the judge said no, the man asked for one minute, to which the judge again said no.

“Well I’m going to have to do something,” the father said before charging toward Nassar.

He first stopped by Nassar’s attorney, Matthew Newburg, before being restrained immediately by bailiffs in the courtroom while yelling “I want that son of a bitch,” and saying “give me one minute with that bastard.”

The attorney for the victims spoke to the gallery after the man rushed toward Nassar telling them to use their words and not use violence.

After the incident, the judge cleared the courtroom and took a slight break.

If there was true justice in this world, this father would be allowed his one minute. Some monsters don’t deserve human rights.

Wow, I wonder if he hadn’t asked for the 5 minutes and simply lunged without warning how much damage he could have done. That doctor deserves everything that’s coming to him in prison.

I’m not saying that Nassar doesn’t deserve everything coming his way in the near future….

But this Dad needs to be looking to himself. In the first place, USA is on the line for some very deep liability claims because it is considered one of the top providers of training on Youth Protection Standards. I’ve taken it – it’s clearly defined and easy to understand on both sexual abuse and on abusive coaching practices, as well as the duty to report. So how anyone in the organization could claim to not see what was apparently plainly occurring in plain sight and report it is a huge problem. In order for his daughters to be a part of USA Gymnastics, they have to sit through that training too.

I could actually give a parent of one child a pass, but this man had 3 daughters in the program. How did his daughters not trust him to ask him to take them out of that program? He saw what was happening but was so blinded by the chance for one of them to earn a Gold Medal, he willfully condoned the abuse.

I’m currently dealing with a “trusted adult” who was blatantly grooming young girls and their parents and was setting them up for abuse. It wasn’t discreet, it was out in the open. Because I took the USA training, I was able to make a very strong case to have him investigated. It took repeated efforts and putting my own reputation on the line with some very high up people.

And when he was caught, fired and arrested, I also took the blame. 3 parents made sure I understood that I was damaging their daughters’ futures by denying them access to him. 2 of them have privately contracted with him.