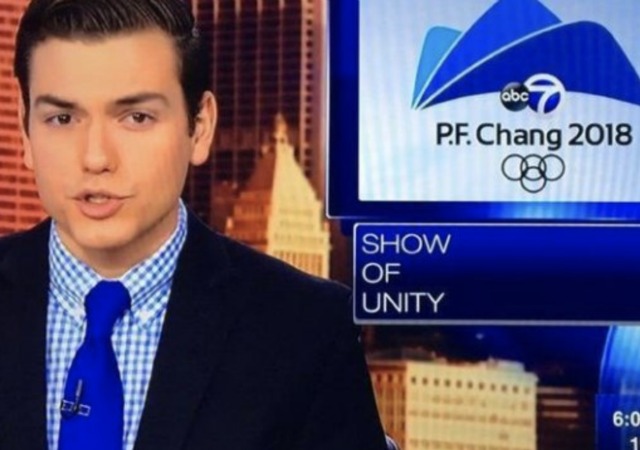 Oh boy. The ABC station in Chicago, WLS, aired a graphic that should have said PyeongChang 2018, but it said P.F. Chang.

Pyeongchang is a mountainous county 110 miles southeast of Seoul in South Korea, and the host of the 2018 Winter Olympics.

P.F. Chang’s is an Asian-inspired chain restaurant with 210 U.S. locations, including ones in Chicago, Lombard, Northbrook, Orland Park and Schaumburg.

PyeongChang and P.F. Chang’s are not the same thing, and beyond the fact that they both begin with the letter P and end in “Chang,” they have little in common.

This distinction, however, appears to have eluded WLS-Ch.7’s news team, which on Saturday morning accidentally broadcast a report about the political backdrop to the Winter Olympics, illustrated with the graphic, “P.F. Chang 2018.”

Jayme Nicholas, a spokesperson for the ABC affiliate in Chicago, told Inc. that the goof was the result of a mix-up. The graphic was created for a different “satirical piece” put together on Friday by sports anchor Mark Giangreco in which viewers were encouraged to invent their own Olympic sports, but it was mistakenly also used for the serious news story read on Saturday by weekend anchor Mark Rivera, Nicholas said.

Nicholas apologized for the gaffe, which is the kind of screw-up that makes all of us in the news business touch wood and utter the phrase, “There but for the grace of God go I.”

Yes, another clue being the missing Olympic ring out of the original five, indicating the exclusion of a continent: probably that sunny hot continent of Australia in the Winter games.