Part of a pattern on campuses to create a price tag for Israeli and pro-Israel speech. 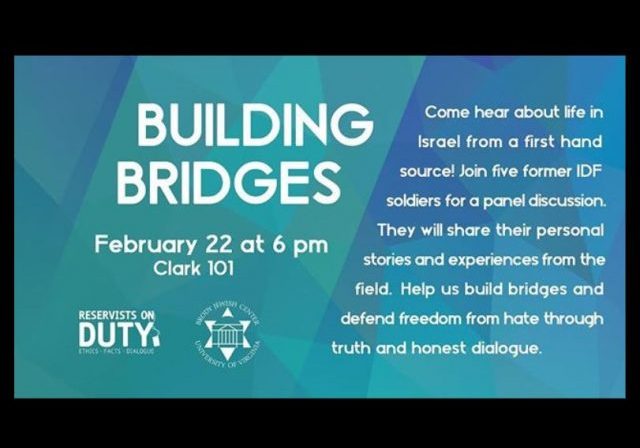 As we have documented here dozens of times, a standard anti-Israel tactic on campuses is to disrupt events and speakers. The purpose of even a temporary disruption is to intimidate and make clear there is a price to pay for Israeli or pro-Israel events.

It happened again, at an event sponsored by the Brody Jewish Center – Hillel at the University of Virginia and two pro-Israel student groups.

The event was Building Bridges, which takes place on many campuses. It gives Israeli Defense Forces reservists, through a group called Reservists on Duty, the chance to tell their story, and to be challenged on the Israeli-Palestinian dispute. There is no attempt to shield the speakers from “tough” questions.

Here is the promotional video for the current tour:

The event at U.Va. was titled “Building Bridges”: 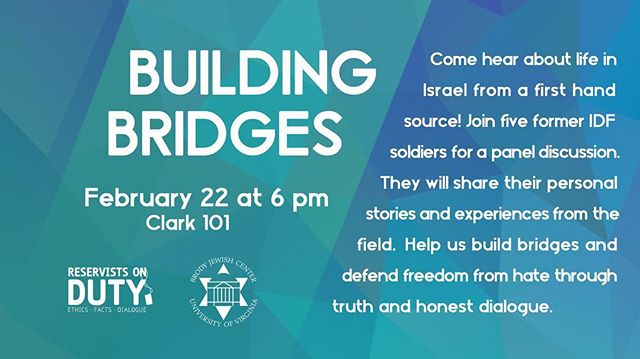 What happened, however, is that protesters crossed the line and disrupted the event. The Washington Post reported:

Protesters disrupted a panel discussion held Thursday evening by a Jewish student group at the University of Virginia, prompting the dean of students to email the student body saying the incident “runs counter to our important shared values of respect and intellectual inquiry, and should be firmly rejected.” ….

Campus police arrived to restore order and the protesters left.

In his letter to students, Dean Allen W. Groves said he had reviewed video of the incident and that it appeared several university policies and standards of conduct were violated by the protesters. Neither Groves’s letter nor the Jewish group’s post identified how many protesters took part, who they were or what they were protesting.

The protest, Groves wrote, ran counter to the university’s commitment to a free exchange of ideas.

“Freedom of expression, freedom of association, and freedom of religion are all critical tenets of our diverse community of scholars,” Groves wrote in his email. “We have been fortunate that despite the interplay of passionately held views on opposite sides of many issues, our students are generally very respectful toward one another and reject the ‘heckler’s veto of shouting down those with whom we may disagree.”

I have not been able to obtain video of the disruption, but a student described what happened in this video interview. The protesters used a bullhorn as part of the disruption. They spent about 15 minutes in the room, and another 20 or more minutes with bullhorn just outside the windows of the event:

As part of our initiative to invite and encourage open dialogue about the complex issues facing our students, last night the Brody Jewish Center, CavPac, and Hoos for Israel hosted “Building Bridges,” a panel of Israel Defense Force reservists to Grounds to share their personal stories and answer tough questions from the University community. The idea behind the panel was to humanize the conflict, learn about Israeli society, and allow for honest conversation.

During the program, a group of students and non-students entered the room, began chanting anti-Israel slogans, holding up signs, and passing out information. Though student leaders and Rabbi Jake invited the protesters to participate in the program and address their concerns through conversation, protesters declined and continued to disrupt the panel.

Campus police were called, the protesters dispersed on their own, and the program continued. Following the protest, reservists made clear they wanted to carry on, and challenged students and community members to ask difficult and important questions. The conversation continued, and students with various points of view engaged in productive dialogue with the reservists.

While free speech and the ability to protest are important aspects of college life, we are disappointed that protesters refused to engage in conversation and instead continued to shout intimidating and hostile slurs directed at students, staff, and panelists. UVa is and has always been a place for the free exchange of ideas, learning from opposing views, and open dialogue.

Since last night, we have been in touch with University leadership and Hillel International to discuss the incident and determine how best to prevent this type of disruption in the future. We are committed to continuing programs that educate, raise pertinent issues, and welcome constructive dialogue around Israel and many other topics. We are committed to helping our students as they challenge, investigate, and form opinions about the world around them.

To our students: as always, staff is here to listen and support you in any way. Thank you for your willingness to work toward open dialogue and conversation on Grounds. Let us know if there’s anything we can do.

While we don’t have video from the U.VA. protest (yet), it’s obvious that this protest was disruptive in the similar way other events have been interrupted. This video at UC-Irvine shows the disruption of a Reservists on Duty presentation:

This video from San Francisco State shows how invasion of the room amounts to silencing others speech even if there is no violence:

The campus police should’ve arrested the hooligans who disrupted the event. Hopefully, the university administration will take disciplinary action against them.

The Campus police allowed this to happen because they are jew-haters themselves who were happy to aid and abet these modern day brown shirts. Watch the administration give them a wink and a nod, too.

It’s the details that matter. ^^

When I refer to these protesters as Pro-Terrorist and ignore the labels they choose for themselves.

Those protesters who crossed the line and invoked the hecklers veto should be called to an administrative hearing and if found culpable, expelled. Otherwise this will not stop.

It’s unsurprising that people who agitate on behalf of a supremacist and totalitarian ideology (Islam) are unabashed about using infantile and thuggish intimidation tactics to attack and attempt to cow those people whose opinions they disagree with. The refusal/inability of these twits to engage in a civil defense of their platform and positions, based on the (alleged) merits, represents, I’d submit, a tacit admission that their opinions will not hold up to scrutiny and objective analysis.

The UVA Administration’s response was somewhat better than the milquetoast, collaborator rationalization narratives that we’ve seen from other schools, wherein blatant anti-Semitism, disruption antics and hostility fom pro-“Palestinian” agitator-students has not only been tolerated, but, encouraged and praised as some sort of laudable behavior.

1 – when ‘students’ enter these venues, they MUST go through detectors, similar to airports to detect weapons of all sorts (including bullhorns).
The disrupters must be identified and sued for the cost of security.

if there are IDF students on campus, let them deal with these attacks on our freedom.

One never sees pro-Israel students disrupting pro-Palestinian events. Perhaps, that is what is needed to stop these thugs. What’s good for the goose is good for the gander.