“major contribution to the protection of First Amendment freedoms” 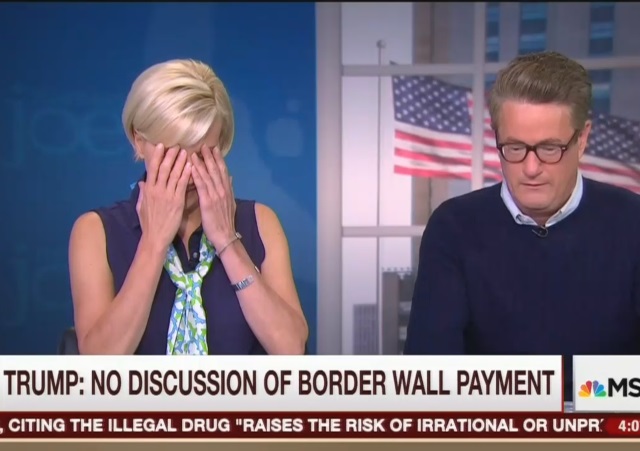 Joe Scarborough and Mika Brzezinski of MSNBC’s Morning Joe are about to be honored with a journalism award because of there’s one thing people in media love to do, it’s pat each other on the back.

Two of most wildly irresponsible members of liberal media, MSNBC anchors Joe Scarborough and Mika Brzezinski, are going to receive an award for being part of “a distinguished group of journalists and First Amendment leaders that exemplify responsible journalism and who practice their constitutionally guaranteed duty to seek and report the truth.”

That’s not a joke, the Radio Television Digital News Foundation (RTDNF) will actually be honoring the Morning Joe co-hosts during the organization’s annual First Amendment Awards dinner on March 8 in Washington, D.C. The couple will specifically receive the Leonard Zeidenberg First Amendment Award for “a radio or television journalist or news executive who has made a major contribution to the protection of First Amendment freedoms.”

In just the past week, Scarborough and Brzezinki have attempted to diagnose Donald Trump with a myriad of mental illnesses while also labeling him an “evil” “racist” who loves Nazis. Over the course of the past year, the pair have routinely offered similarly unhinged commentary against the President.

They sure do work hard. Does everyone remember back in September when Mika said she couldn’t tell the difference between Trump and Kim Jong Un?

Or how about the time Joe said it was chilling that so many Americans voted for Trump?

Here’s more about their award from the RTDNF website:

RTDNF presents this award annually to a radio or television journalist or news executive who has made a major contribution to the protection of First Amendment freedoms. It is named for the late Broadcasting & Cable senior correspondent Leonard Zeidenberg.

People like Charles Murray and others have been attacked by mobs on college campuses, but the people in Joe and Mika’s social circle see themselves as brave defenders of the First Amendment.

Just take a look at this excerpt from TV Newser:

In the last year, the First Amendment has been under attack as the news media has had to fight against unprecedented accusations from the highest political office in the land.

That’s one of the reasons the Radio Television Digital News Foundation says this year’s annual First Amendment Awards are more important than ever.

They have such an inflated sense of self importance yet no self awareness at all.

You’ve got to be kidding.

notamemberofanyorganizedpolicital in reply to Exiliado. | January 18, 2018 at 10:19 pm

Why…..that’s like giving Obama a Nobel Prize – even before he shows up for a job…….

These heroes vigorously defend the Fist Amendment with their false news and vicious attacks on the President. They push the boundaries. The First Amendment protects not just rational and coherent speech, but also the rantings of lunatics!

Thank God I don”t have to watch/listen to these clowns.

So … what are the Progressives going to do when somebody points out that the spew from Joe & Mika’s Playhouse is “hate speech”?

However, the free market doesn’t protect against anything – except stupidity. Blow these two morons off, and they and their tv show will just drift away.

So, this journalism award will just be another participation trophy like the Nobel Peace Prize.

This is a consolation prize for not even being important enough for Trump to parody.

Two idiot protracted adolescents, who deserve the misery of one another.

“The Leonard Zeidenberg First Amendment Award”? At first I thought it read, “The Zoidberg Award”. I think the latter would be more prestigious, and fitting, in any case.

How about the Lennie Hemmorrhoid Award, because SOMETHING is stuck is Bozosinzkis rear-end. Most likely her head.

Funny, you don’t watch these people for a while, then tune them in, they REALLY look the pathetic propagandists they aspire to be.

Is it necessary to point out that the President of the United States also has rights under the FIrst Amendment? Including the right to criticize the media?

Do these self-important media performers (for that’s what televison is and always has been, a “show”) believe they are (or should be) above criticism?

Or perhaps they have fantasies that, really, they are sorta like Resistance Fighters in Vichy France?

They are primarily entertainers. Some of the public finds their Outrage! at the President entertaining; therefore media companies continue to employ them. Their jobs remain at infinitely greater risk from a drop in ratings than from Pres. Trump, or any other government official.

Those awards are like the Oscars. People in the same business slapping each other on the back.