“this Military Veteran would gladly go” 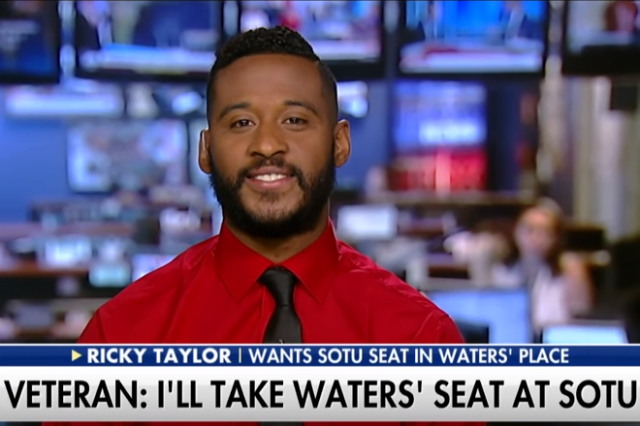 An army veteran named Ricky Taylor took advantage of the fact that Maxine Waters and other Democrats are boycotting Trump’s first state of the union address. He published a tweet asking to take Waters’ seat and it went viral.

@FoxNews Everyone please help and retweet. I would like to take Maxine Waters seats at The State Of The Union Address. If they don't want to go this Military Veteran would gladly go. I'd tell the President how much he means to myself, family, Military, and all of his supporters!

He was even invited on FOX and Friends to discuss it:

Now Taylor is getting his wish. Wisconsin Republican Sean Duffy invited him to come along.

Rep. Sean Duffy said Thursday that he’s given his guest ticket for the State of the Union to the Army veteran who asked to take the ticket of those representatives boycotting the speech.

Ricky Taylor, who served two tours in Afghanistan, tweeted earlier this week that he would like to attend the speech since he is a Trump supporter. His Twitter handle is “Deplorable Vet,” a play on Democratic presidential nominee Hillary Clinton’s description of some Trump supporters as “a basket of deplorables” during the campaign.

“@FoxNews Everyone please help and retweet. I would like to take Maxine Waters seats at The State Of The Union Address. If they don’t want to go this Military Veteran would gladly go. I’d tell the President how much he means to myself, family, Military, and all of his supporters!” Mr. Taylortweeted Monday.

Mr. Duffy, Wisconsin Republican, saw the request and decided to give the ticket usually reserved for his wife to Mr. Taylor. The Army veteran said Thursday that he’s happy to attend the speech with Mr. Duffy and never really believed Ms. Waters, California Democrat, would respond to his request.

It's official! I am going to the STATE OF THE UNION ADDRESS! Thanks to Representative for Wisconsin's Seventh District Sean Duffy @RepSeanDuffy for personally inviting me as his guest! I am extremely thankful for this. Couldn't have done it without all of you and @foxandfriends pic.twitter.com/4lIvgmb7RP

There are several Democrats boycotting the event. Matt Vespa of Townhall has the list:

President Donald J. Trump is set to deliver the State of the Union on January 30. To no one’s surprise, a few Democrats will be boycotting the event. Well, five total—all the typical loudmouths of the Democratic Party.

They should give the remaining seats to other veterans. They deserve them.

We should encourage all of the dems to stay away from the SOTUS.

1. America would see precisely how little respect they have for the office, our legal citizens and our country.
2. We wouldn’t have to watch the cameras pan those lefty bitter-beer-faces.

Absolutely, give that seat to the vet. I’d like to see other seats unoccupied by ‘rat protestors. to border patrol agent.

Kind of sends a message.

He’s a 10 percenter. Welcome to my minority’s club.

This move should be called #BeautifySOTU, since the, er, nasty factor just dropped considerably. Let’s hope Elijah Cummings boycotts too. I don’t think that man has smiled since his 2nd grade school photo

Thank you Ricky for your service and enjoy the SOTU

Don’t know why democrats are invited to the STOTU anyway. I thought it was for Americans.

Certainly not for fake oath-takers.

“I do solemnly swear (or affirm) that I will support and defend the Constitution of the United States against all enemies, foreign and domestic; that I will bear true faith and allegiance to the same; that I take this obligation freely, without any mental reservation or purpose of evasion; and that I will well and faithfully discharge the duties of the office on which I am about to enter: So help me God.”
https://www.senate.gov/artandhistory/history/common/briefing/Oath_Office.htm#3

Now: name one federally elected democrat who has not breached his/her/its oath of office.

I’m getting a lot better at watching these videos. I know they’re going to put on the ugly to show her deliver her point of view and I don’t care to hear it. Skip, skip, skippity, skip skip, skip. Denied!

You cannot make them shut up. But you can go lalalalalalala all the way past them.

When I was in the service I never cared if a guy’s family originated in Nigeria or Norway. As long as he could pull me out of a burning space and haul me up a ladder or two. And didn’t miss movement or fail to have a haircut.

If it means anything to you, I only was allowed to become a bunch of Marines decided I could.

And if I’m serving as a bus driver for Marines and any of MY Marines is in extremis, I’m lowering a boat and I’m rowing out to get him.

I only was allowed to become a Naval Officer…

What you need to know, what everyone needs to know, if they didn’t think much of me they could have inflicted so much punishment on me I would have had no choice but to quit. I went through with an enlisted EOD diver that could tolerate it but he was the rare exception. The DIs actually took him aside and told him, look, we respect you and know you can take the beating we’re allowed to dish out but we are asking you, respectfully, for your cooperation.

As it was I largely breezed through because I didn’t know it at the time but my dad, the sainted Senior Chief, had been preparing me for AOCS my whole life.

Imagine having a large formal party and paris hilton or kim kardasashian tries to crash it? Same reaction with these fake oath-taking bums.

On the night of the speech, there should be a barn set up somewhere, where waters, jayapal, lewis and blumenaur are fed at the trough they belong at, while a TV plays Trump’s speech.

I’m so glad to hear he gets to go! I’d much rather look at him in the audience than the sour-pusses.