Trump: Palestinians “disrespected us” by not meeting “our great Vice President” during Israel trip

Trump: Palestinians “disrespected us” by not meeting “our great Vice President” during Israel trip

No more U.S. aid funds “unless they sit down and negotiate peace” 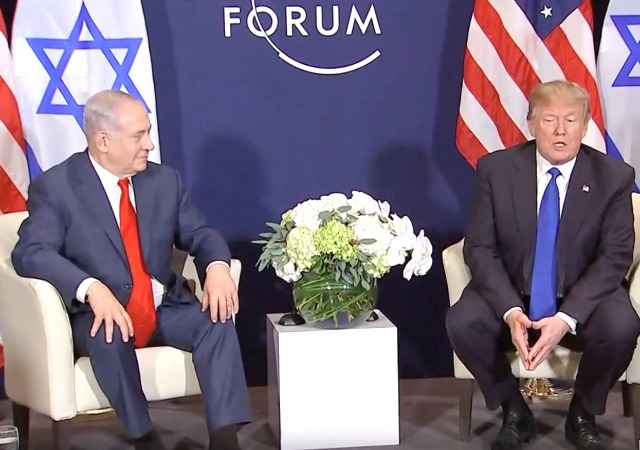 While in Davos, Switzerland, President Donald Trump has threatened to cut Palestinian aid unless they come to the table to discuss peace with Israel. From The Times of Israel:

Trump made the announcement as he sat next to Israeli prime Minister Benjamin Netanyahu:

“If you look back at the various peace proposals, and they are endless, and I spoke to some of the people involved. And I said, ‘Did you ever talk bout the vast amount of funds, money that we give to the Palestinians? You know, we give hundreds of millions of dollars.’ And they said, ‘We never talk about it,’” Trump said. “Well, we do talk about it. When they disrespected us a week ago by not allowing our great vice president to see them, and we give them hundreds of millions of dollars in aid and support, tremendous numbers, numbers that nobody understands, that money is on the table.”

The president also suggested his December 6 announcement recognizing Jerusalem as the capital of Israel and set in motion plans to move the US embassy there settled one of the key issues in the conflict.

Politico also noted that Trump expressed displeasure that the PA disrespected Vice President Mike Pence on his visit to the Middle East:

“They disrespected us a week ago by not allowing our great vice president to see them,” he said.

Pence announced during remarks at the Knesset, Israel’s legislature, on Monday that the embassy in Jerusalem would open in 2019. His address was marked by protests from Arab Israeli lawmakers, who according to national media were escorted out of the building after contesting the comments.

Pence told the Associated Press that he was “open” to meeting with Palestinian officials during the visit, but was reportedly rebuffed by President Mahmoud Abbas.

Trump insisted Thursday that Palestinian leaders would need to show more “respect” if discussions were to progress.

“We’ll see what happens with the peace process, but respect has to be shown to the U.S.,” Trump said Thursday.

In a rambling, two and half hour long speech Sunday night, the Palestinian leader sharply escalated his rhetoric, lashing out at the U.S., Israel, Britain and even other Arab leaders, whom he told to “go to hell” for criticizing him. He pronounced the peace process dead, and accused Israel of killing it.

In the address, Abbas attacked Trump over the Jerusalem decision and rebuked Trump’s recent Twitter comment threatening to cut American aid and alleging the Palestinians were no longer willing to negotiate a peace deal.

“Since when did we reject negotiations?” Abbas told members of the Palestinian Central Council, a key decision-making body. “Shame,” Abbas said, addressing Trump.

To laughter from the crowd, Abbas then added the phrase “Yekhreb Beitak,” literally translated as “may your house be demolished.”

Trump brought up cutting aid to the Palestinian Authority back on January 2.

It’s not only Pakistan that we pay billions of dollars to for nothing, but also many other countries, and others. As an example, we pay the Palestinians HUNDRED OF MILLIONS OF DOLLARS a year and get no appreciation or respect. They don’t even want to negotiate a long overdue…

…peace treaty with Israel. We have taken Jerusalem, the toughest part of the negotiation, off the table, but Israel, for that, would have had to pay more. But with the Palestinians no longer willing to talk peace, why should we make any of these massive future payments to them?

America may also cut off aid to the Palestinian Authority if the Taylor Force Act ever reaches Trump’s desk. This act, named after the Jewish American student murdered by Palestinian terrorists in March 2016, will strip funds if the PA continues to reward terrorists that kill Americans and Israelis.

Last January, Trump froze $221 million to the PA that former President Barack Obama granted in the last days of his administration.

It’s pretty dumb of us to give any country or entity money that we have to borrow first. Even more dumb if it doesn’t help us achieve our goals.

Right. We have our own sh*tholes we can throw it down as the most expensive war the U.S. has ever waged is a testament, the War on Poverty 🙂

They are the al sharptons of the middle east.

THE Palestinians #1 enemy is themselves; they have no respect for anyone, especially themselves.

This will teach them not to meet with John Kerry again

I think it would have been even funnier if Trump had said that the Palestinians micro-aggressed Pence.

The quote is attributed to Abba Eban after the Geneva Peace
Conference with Arab countries (21 December 1973).

Peace is bad for Hamas business.

Palestinian peace plan: From the river to the sea.

And you expect to get somewhere with these people?

my plan as well, return the Jewish Homeland to the Jews.

Taylor Force a “Jewish American”??? No way–an American certainly–and certainly a victim of Arab moslem terrorism–but certainly not “Jewish” –unless our definition has changed !!! ABJ

A plausible reason why the Palis wouldn’t meet with Pence.

What the Quran Says,

3:28 Let not the believers [Muslims] take the disbelievers as friends instead of the believers, and whoever does that will never be helped by Allah in any way, except if you indeed fear a danger from them.

5:51: O you who believe! [viz., Muslims] Take not the Jews and the Christians as friends, they are but friends to one another. And if any amongst you takes them as friends, then surely he is one of them. Verily, Allah guides not those people who are the Zalimun [a wrong doer].

Palestinians are still listening to that idiot Kerry and think they actually have some kind of power here.

Trump is signaling the days of demanding concession after concession from Israel until the Palestinians walk away again is OVER.

The Palestinians have contributed NOTHING towards the so-called peace process for decades.

A brilliant move by Trump. The jihadists, by dissing VP Pence, literally handed President Trump the perfect leverage to tell them, “put up or shut up.”

President Trump has, once again, seized the high ground. No more money until you anti-Israelies show some good faith. Since that will never happen, it opens the door to more political isolation for abbas, and more support for Netanyahu.

Trump disrespected you? Why do Palestinians deserve respect?

At best they are victims who have allowed their issues to be hijacked used as props by those who hate the Jews.

At worst, they have traded in their Liberty, their families, their future to become the global equivalent of the soccer player taking a dive to draw a yellow card. So I can anyone have respect for Palestinians when they have no respect for themselves.

I would be sad and pity them except there’s a good reason not a single nation in the Middle East will take them in.

and naturally the moment after I hit publish I realize I’ve read it backwards.

Nanana I’m going to go with it… how dare the police demand respect from anyone…. haha

Yes, Mr. Abbas doesn’t realize that times have changed. The Pals no longer have the influence over the U.S. government they had under the Obama administration.

I’m thinking I like this attitude from a leader, ‘You f’ with me I will f’ with you’. Sweet and simple adage of life 🙂

This is a refreshing approach to Palestinian violence. Basically this White House administration is no longer viewing Palestinians as victims. They are, for the first time, IF you want peace then come to the table and negotiate in good faith!

Mean while in Europe they are still stuck on the view that the Palestinians are poor victims and have no responsibility for their actions. Therefore peace will NEVER be achieved because there is no incentive for peace to be achieved.

You know what this all looks like? Trump can speak the truth because he can. Europe has to keep the lie alive (that Palestinians are victims) because unlike America, Europe HAS a very large and very violent ethnic minority within its midst that it has to placate!

It would be helpful and virtually guarantee peace if Europe got on board the same Trump boat and started to demand Palestinians act like they want peace.

President Trump. Don’t threaten the Palestinian filth. Cut off every dime to these heathen bastards.