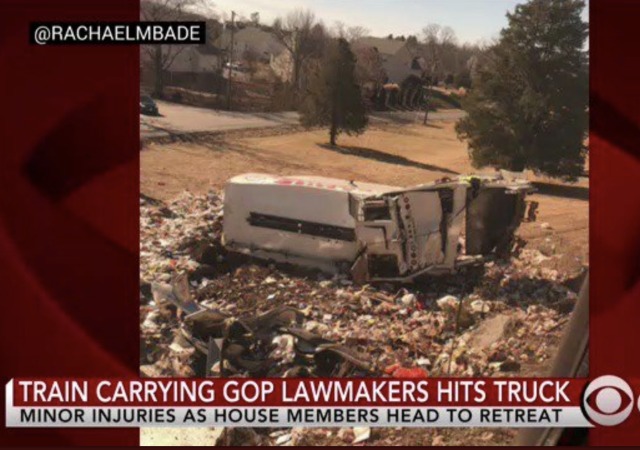 A train carrying GOP members of Congress to a retreat has hit a truck. From CNN:

Rep. John Faso, a New York Republican, who was on the train that crashed, said he was able to see the truck that hit the train, and that he was told that injuries were expected from people in the truck, not train.

“There was (what) looks like a tractor trailer carrying trash that was hit by the train,” Faso, who said he was in the third car of the train, told CNN.

“I think everyone on the train is OK,” Faso said. “I don’t know that for sure, it’s a long train. But most of the concern is for the people outside.”

One GOP source was unsure how many members of Congress were on the train or how many people were injured, but said there were injuries.

Republican members of Congress were on their way for a retreat at The Greenbrier in White Sulphur Springs, West Virginia starting Wednesday and ending Friday. Vice President Mike Pence, who was not on the train, is scheduled to speak to members later Wednesday and President Donald Trump is scheduled to address the event tomorrow.

The train left from Union Station in Washington earlier Wednesday.

MORE: White House official confirms train carrying House GOP members hit a truck; there are no fatalities that they know of at the moment https://t.co/1aMPhVZzBu pic.twitter.com/vg3IJvYmnq

NEW: Spokeswoman for the Congressional Institute, which is sponsoring the retreat, confirms the following to @NBCNews: