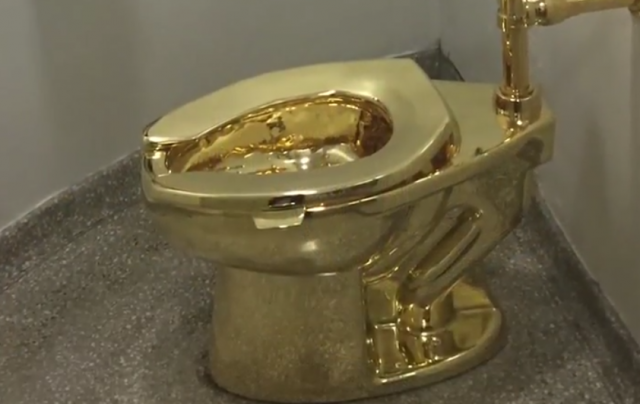 According to its website, New York City’s Guggenheim Museum “collects, preserves, and interprets modern and contemporary art, and explores ideas across cultures through dynamic curatorial and educational initiatives and collaborations.”.

Therefore, when given the opportunity to send a Vincent Van Gogh piece to display at the White House, so First Lady Melania Trump could demonstrate American support for classic art, the representatives at the Guggenheim behaved in the professional and exemplary manner that you would expect from the New York City art world:

The emailed response from the Guggenheim’s chief curator to the White House was polite but firm: The museum could not accommodate a request to borrow a painting by Vincent van Gogh for President and Melania Trump’s private living quarters.

Instead, wrote the curator, Nancy Spector, another piece was available, one that was nothing like “Landscape With Snow,” the 1888 van Gogh rendering of a man in a black hat walking along a path in Arles, France, with his dog.

The curator’s alternative: an 18-karat, fully functioning, solid gold toilet — an interactive work titled “America” that critics have described as pointed satire aimed at the excess of wealth in this country.

The toilet is a pointed statement on American wealth.

The 18-karat solid gold toilet was created by artist Maurizio Cattelan and is meant to represent America’s wealth and excess. It spent a year on the 5th floor of the Guggenheim installed for museum visitors to use. The toilet is estimated to have cost close to $1 million to create.

When asked why he was offering his work to the President, Cattelan responded “What’s the point of our life? Everything seems absurd until we die and then it makes sense.”

Presidents and their First Ladies routinely request the loan of special pieces of art to enhance their temporary home and to add to American prestige, which can be critical in international relations.

The immature, snark-filled response that belittles wealth creation was a slap in the face not only to the Trumps but to the millions of Americans who support them.

An art critic explains how the rejection was a work-of-art in itself:

So the artwork here is not by Cattelan, who is merely instrumental in this game. Rather it is the work of Guggenheim curator Nancy Spector, who made the offer to the White House. Curators may be talented and creative, but they are not often in the business of making art itself. But now the Guggenheim owns a new work, a Spector original, which will add if not luster at least levity to the museum’s collection. And perhaps, like all political art, a little bit of risk, too. The president is not known to suffer sick burns with a light sense of self-deprecation.

This explains that why I feel art died after the Pre-Raphaelite era.

Outside of the “elite zone” occupied by precious Guggenheim curators, many Americans are upset and plan to send their own message to the museum.

@Guggenheim Thank you for allowing #NancySpector insult our @POTUS by offering him a #GoldenToilet. Please don’t be expecting my yearly donation this 2018. Seeing as I voted for @realDonaldTrump I’m assuming my donations aren’t wanted anymore.

@Guggenheim I have visited you in the past, but no more. You have gone down the toilet drain. You should have never offered the Golden Toilet. Very disrespectful.

#Guggenheim offered a gold toilet to @POTUS a VanGogh that he requested to borrow for the #WhiteHouse. Tasteless and disappointing response from one of the most prolific art museums in New York. #LiberalismIsAMentalDisorder

I wonder how inclined tourists from the rest of the United States who voted for the President would be to visit the Guggenheim at this point? Frankly, it isn’t my cup of tea, but I suspect that by insulting the Trumps so “cleverly,” the museum has lost many potential customers.

If I were a curator of an art museum in a Trump-supporting region, I would publicly offer our First Lady a choice of masterpieces from its collection. I would also feature that the museum was truly tolerant and supportive of all aspects of American culture.

As long as the Guggenheim started off being tasteless, I wouldn’t mind taking a dump, the first chance I got, in that golden toilet.

notamemberofanyorganizedpolicital in reply to DieJustAsHappy. | January 27, 2018 at 5:50 pm

GMTA, except I thought:

“Geesh! How OUT OF TOUCH and OUTDATED the Elitist Endowed Guggenheim really is – to not have a Dreamer sitting on it!

DieJustAsHappy in reply to notamemberofanyorganizedpolicital. | January 27, 2018 at 6:14 pm

I guess that’s why they’re called Dreamers: a chicken in every pot, a car in every garage, and a golden toilet in every bathroom!

Those edgy New York sophisticates are going to have to try a lot harder. I’ll bet Trump’s already got one of these.

And—perhaps unlike the Guggenheim—I imagine he paid for it, too.

to send a Vincent Van Gogh piece to display at the White House, so First Lady Melania Trump could demonstrate American support for classic art

This is actually a bit surprising. Why not support American art? We have rather a lot of it lying around. Let the Euros support their own art … at least until the Muslims destroy it.

Reminds me of the joke about the Golden Urinal. A drunk in a bar had to pee, and staggered into a storeroom rather than the bathroom. A while later when he finished his business and sat back down at the bar, he was raving to the people next to him about the Golden Urinal in the bathroom. The bartender finally heard him, and hollered to the band, “Hey Marcellus, I think we found the guy who peed in your saxophone!”

Like the NeverTrumpers who clutch their pearls over tone and decency and then promptly call the President of the United States a douchebag.

From what I understand, the Guggenheim Museum is a private entity funded by the price of admission and private charity, so the curators are free to behave as adolescent, uber-leftist turds spouting Camus nonsense.

However, it does have 501C status that might suddenly come up for a negative review. Just sayin’…

How appropriate that Obama spied, Clinton colluded, DNC denied, Water Closet conspiracy was captured in gold. But where is Deep Plunger?

He should accept it, pass it around for everyone to take a crap in, then send it back.

Hey, it looks good to me.
But, it could use arm-rests and a magazine rack to match.

Up voted you because it’s funny, but I do believe PDJT had his eye on the WH for a lot longer than that night. Might have pushed him a little extra to push hard to be sure and win though.
There’s a video of him being asked by Oprah about a run for President which was done I think in the 80’s. He says pretty much America First. And there are other things out there.

And they probably claim Trump is vulgar.

President Trump should accept the loan of the museum’s golden toilet, then put it next to the presidential podium during press conferences and so on. Use it as an ersatz table for his water glass.

Make the press use it – as it is, with no plumbing. In the middle of the Rose Garden.

If they wanted to convince Trump to follow through on his threat to defund the NEA and NEH, this ought to do it.