And the ever elusive independent vote? They loved it too 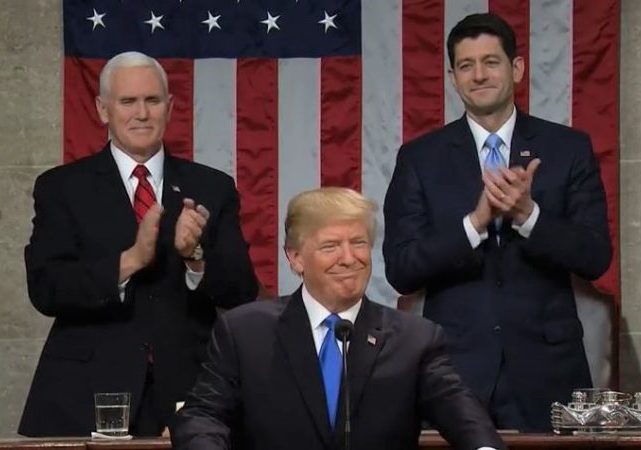 If you subscribe to our newsletter, Morning Insurrection, (*cough* shameless pitch *cough*) you’ve received my take on Trump’s first State of the Union Address. If you’re not a subscriber (you should be), my initial take (exclusive content!) was as follows:

Trump delivered a far better State of the Union Address than I expected.

It was heartening to hear a president speak about the greatness of our country instead of lecturing us on everything wrong. Trump’s speech was populist at heart but left me wondering when we’re going to talk about our unsustainable debt and whether he’s given up on trying to repeal Obamacare since he succeeded in scrapping the individual mandate.

That said, it’s a speech I can be proud of, and one that will likely have appeal beyond his hardcore supporters.

I figured Trump’s SOTU address would reach beyond his base but severely underestimated how far.

Eight in 10 Americans who watched tonight felt that the president was trying to unite the country, rather than divide it, according to CBS News poll https://t.co/OZsw2drXbJ pic.twitter.com/6fEeSPMkdW

A far cry from Democrat rhetoric, a majority of respondents believe Trump’s policy agenda, as laid out in the address, will help them:

75% approved of his address:

And the ever elusive independent vote? They loved it too:

And let’s talk about immigration, shall we? 72% approved of Trump’s immigration plan that grants amnesty to Dreamers, strengthens the southern border, and ends chain migration:

The respondent pool was slightly more conservative than liberal, though not by much:

The MSM is already at it. “Melania wore white!” “We have questions!” they squeal!

A glance at the Yahoo page gives you a pretty good idea of the sort of incoherent flailing the left has fully invested in for some time, now.

notamemberofanyorganizedpolicital in reply to Virginia42. | January 31, 2018 at 7:15 pm

Please fasten down the lid on their coffin.

They “have been dead three days already and stink by now.”

God Bless the U.S.A.
Lee Greenwood
If tomorrow all the things were gone
I’d worked for all my life
And I had to start again
With just my children and my wife
I’d thank my lucky stars
To be living here today
Cause the flag still stands for freedom
And they can’t take that away
And I’m proud to be an American
Where at least I know I’m free
And I won’t forget the men who died
Who gave that right to me
And I gladly stand up
Next to you and defend her still today
Cause there ain’t no doubt I love this land
God bless the USA
From the lakes of Minnesota
To the hills of Tennessee
Across the plains of Texas
From sea to shining sea
From Detroit down to Houston,
And New York to L.A
Well there’s pride in every American heart
And its time we stand and say
…..

That should be Trump’s 2020 campaign song!

The speech was pro America. Democrats sat on their hands as a result. Bad optics. I know some Dems would have liked to applaud with Republicans, but they dared not.

I’m split on this.

Part of me realizes that the Dems did all their strategy beforehand, unaware of how well the speech was being received and how dumb they looked during the actual execution of it.

Part of me is shouting “They got copies of it several hours before the speech!”

Yes, when you screw with the bull you can get gored! The Dems are really good at ‘sticking to their plans’, even when it results in self-immolation! It wasn’t just the words that caught peoples attention, it was the presentation. President Trump threw them a curve ball with his sober presentation, minus all bombast. Obama’s party deserves so much more failure than last night…

“I know some Dems would have liked to applaud with Republicans, but they dared not.”

No, no I don’t think so. They are corrupt commies to their very core and all the same.

Surprising numbers coming from CBS. He had real accomplishments to list instead of lecturing. I was amazed the Black Caucus did not stand to celebrate the improvement in black unemployment. Bad optics. I thought Pat Kennedy was a terrible choice to deliver a speech complaining about pox upon us by the powerful and wealthy. He has a future, for sure, but I felt like I was watching an enthusiastic debate team captain just buzzing on the buzz words. Not sure if he’s out there for 2020 or to run for Congress. I can imagine there was some back room arm wrestling on the call to have him give the rebuttal.

The talking heads did not help themselves. Their inability to acknowledge any success made them seem like gossip girls sniping.

I hadn’t noticed there was no talk of Obama care. Good point. Kennedy didn’t really touch on that either. I suppose year one was supposed to be Tax cuts, economy and health care. Year 2 is clearly immigration and security.

I should have said Joe, not Pat,

Joe Kennedy drooling while he strung together a series of non-sequiturs, as he stood in front of a used car that looked like it had been pulled from the bottom of some canal, was the perfect metaphor for the dem party today.

notamemberofanyorganizedpolicital in reply to fscarn. | January 31, 2018 at 7:21 pm

That’s got to be “impressive” (SNARK) coming from the red-headed, pasty-white and last of the cursed Irish Kennedy family…….

you need to understand, democrats are democrat even if they list as independent. most not necessarily all are yellow dog democrats, they have vote for a dead candidate. another is no matter what trump does it will never be good enough.

notamemberofanyorganizedpolicital in reply to elle. | January 31, 2018 at 7:19 pm

NeverTrump: No really. I get it now. Sorry about all that nonsense. I’m ready to move on. Together.

WH Press Pool: The President chose not to mention Obama last night. Why?

He didn’t mention Santa Claus or the Easter Bunny either, champ.

That living tribute to FDR (i.e. sitting in their wheelchairs) was a nice touch

Sure, the fact that 72% of independents liked the speech is noteworthy.

But is it anything less than amazing that fully 43% of DEMOCRATS approved of it?

I mean, that’s a higher percentage than his supposed national approval ratings!

Is it possible that in the future Democrats will be able to vote for Trump BECAUSE they don’t view him as a Republican and more as am independent??

Yup, me thinks the DNC has got themselves a really big problem called relevance.

“How f**king tone deaf was that. A Kennedy standing in front of a car delivering a speech. I hope it was an Oldsmobile.”

I know that two innocent people died, but I can’t help it … LMAO! Bravo Zulu!!

In a town called “Fall River,” no less!

The media started to try to change the tone BEFORE the address was given by talking up the second dossier and how it backed up the first.

Tomorrow will be interesting only so far as to see what the media can try to drum up to take the gloss off the speech like they did last year after Presidents Trumps first address (which everyone agreed was delivered in a presidential manner, much to the surprise of the media).

You see the media just wont stand for it! They wont allow anyone to see the real Trump that they don’t want people to see!

“The respondent pool was slightly more conservative than liberal, though not by much:….”

I’m listening to NPR yammering on about how “Americans are dreamers too” is offensive because it implies that DREAMers are not Americans. Isn’t that kind of the point? If they were Americans they wouldn’t have had a problem that needs solving, would they?

My local Fox affiliate (which is at best left of center but often seems left of the NBC local) was criticizing the speech. They harped on the dreamer phrase. They said that the current boon in the economy was “residual of Obmama’s policies.” Yup. They said that. Once again, the reason why I try not to listen to the news and instead read blogs. Can’t trust them at all.

Don’t be fooled. Anybody can give a good speech. He’s the same guy who has been represented by the media/Democrats as the Second Coming of Adolph Hitler; a secret agent who conspired with Vladimir Putin to steal the election from Her Highness to destroy America; who leads the white supremacists; and who is so cra cra he must be impeached or removed by the 25th Amendment.

Don’t be tricked. Giving a great speech is all part of his sinister plot to destroy America.

I was told the man’s an idiot who can’t read, let alone read a speech off teleprompter.

I fell for the shameless newsletter plug and signed up. Anyway…

“After hearing Pres. Trump’s #SOTU address, most viewers think the policies they heard tonight would help them personally, though Democrats disagree”

This lands on my ear oddly. Since when is a president supposed to work to benefit you personally? Since never. The president’s job is to work under the auspices of the constitution to improve the general welfare, to the benefit of the nation as a whole.

Also, regarding that DACA amnesty, it will never happen. The president pushing it, imho, is simply stage-craft and optics. He is basically calling the Dem’s bluff on it, as has been pointed out here, presenting a perfectly reasonable alternative to the democrat’s intransigence and child-like behavior. It’s brilliant actually, it defangs the issue so the Democrats can’t use it to hammer him come election time, and makes them look like powerless, spoiled brats, and also drives a wedge between different Democrat constituencies.

For me, one of the highlights of the evening was watching that rat Gutierrez skulk out of the hall.

Yup. Americans Are Dreamers Too is offensive to Democrats because it puts American Dreamers before Foreign Dreamers.

Which only spotlights that Dems want to import foreigners to replace American voters.

The Democrats want immigrants who are destitute and tolerant of the corruption of 3rd world shit holes so they can enslave them through welfare dependency to vote Democrat for life.

Not only is that deplorable, it’s treasonous. It’s time this cold civil war went hot. Do we really have to let them fire the first shot?

We get to full Mattis on their ass once they start it, right? I know it’s assumed, but I don’t trust that our side won’t just Surrender Gracefully.

So someone spends 30 years in the military fighting in various Shitstan countries and gets his vote canceled by some illegal alian is fine with democrats.

Yup. You remember what the Democrats did in Florida 2000? They avoided overseas military ballots on hyper technicalities, and were high-fiving each other.

The battle lines were clearly drawn for the current war: American sovereignty, by the people for the people….. or globalism and the rule of the elite G8.

After demonizing Trump as the next Hitler, The democrats can’t negotiate with him without inflaming their far left base…Sucks to be them.