Move over Pajama Boy, we have a brand new fashion trend:  skirts for men.

In an era during which rules seem meant to be broken — and more and more people are calling for gender equality — it should surprise no one that the fashion world is the head cheerleader for change. Case in point: the Fall 2018 Menswear designers presenting a variety of skirts on their runways.

A wrap skirt paired with a matching jacket showed up at the Astrid Andersen show in London, as well as a flasher-worthy trench dress at Alex Mullins, and a a flirty full skirt bounced along at Bobby Abley.

Then, Undercover presenting a plethora of pleated maxi skirts in Florence. Designer Jun Takahashi opened with five looks ranging from minimalist monochromatic to grungy, head-to-toe plaid. But the literal showstopper was the finale: a parade of topless men in white maxiskirts. 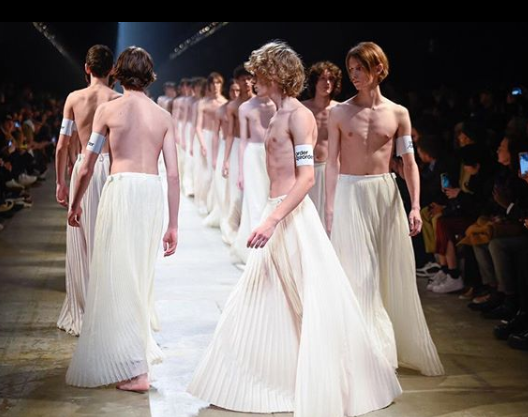 Uh-huh. Dumb teens can chow down on bags of detergent … and now I have an excuse to pour bleach in my eyes.

Every 10 or 15 years some desperate designer comes out with the cliche “men-should-wear-skirts-too” trope. It flops every time. There’s a better chance of bringing back the codpiece.

they’re called “kilts”, but, unless you are Scottish, don’t do it.