Let go of your desire for historical accuracy and enjoy the film! 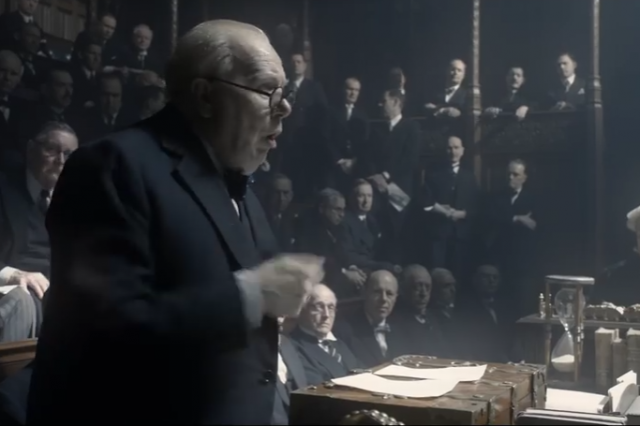 I wanted share with you some thoughts about the one movie I viewed last week: Darkest Hour, in which Gary Oldman portrays a newly-appointed British Prime Minister Winston Churchill who must decide the course to take after Germany’s invasion of Western Europe begins.

In a nutshell: The movie is enjoyable, and Oldman completely loses himself in the role. If Oscars still mean anything, he will certainly be nominated. Additionally, I was enchanted by the interactions between his wife Clemmie (played stylishly by Kristin Scott Thomas) and King George VI (a near reincarnation, played by Ben Mendelsohn). Those of you who enjoy the Neflix series, “The Crown”, and movies such as “The Kings Speech” and “Dunkirk” will likely find this film a cinematic treat.

The film is a worthy release for anyone who enjoys period pieces, great acting, and serious topics. However, I do have one, critical proviso related to the viewing of history-based movies I would like to share. Do not go to “Darkest Hour” with the expectation of complete, historical accuracy.

I am no expert on Winston Churchill, but I recall enough of my World War II reading to know he detested Hitler. I suspected that the dilemma between negotiating with Hitler and war, which was a key plot device, was inaccurate. It turns out, I was right, as noted by Sandford Borins (an author, a professor of Public Management, and a scholar of Churchill):

The movie deeply disappointed me – not because of Gary Oldman’s powerful portrayal of a force of nature – but because screenwriter Anthony McCarten bastardized the true story of British Government decision-making during the critical month of May 1940. This was the month when the British forces in Europe were retreating to the beach at Dunkirk and the Nazis, through the Italian government, were proposing negotiations.

…There are several things inaccurate about this version of the story. The subterranean focus group is pure fiction. Halifax gave up his advocacy of negotiations at the War Cabinet meeting of May 28. Churchill gave his “we shall fight on the beaches” speech a week later, on June 4. Finally, Churchill did send Halifax to Washington – as Ambassador.

My first rule of watching historical films is to let go of the desire to see real history being portrayed. Perhaps it is because I am an amateur Egyptologist, and ancient Egypt’s culture and history is subject to the most egregious levels of bastardization.

So, for me, a movie is a winner if it makes me want to go out and learn more about the events depicted. This movie did, and I found a recording of the “Never Surrender” speech that I enjoyed hearing.

It makes me wonder what Sir Winston would do if Twitter were available!

One other note: I overheard an audience member state that the movie was about 30 minutes too long, and lost part of its impact because of all the extraneous material. To be honest, this seems like a fair assessment. However, I thoroughly enjoyed watching the interactions between Oldman’s Churchill and his wife, secretary, and staff.

On a related topic, and for those if you who have seen “Darkest Hour” and enjoyed it, I would recommend “The Crown”. Granted, I think Queen Elizabeth would recount what actually happened to her family differently than imagined in the series, but the show lovingly recreates the decades featured in each season and the acting is exceptional.

In my opinion, Season 2 Episode 6 is about the best TV episode I have ever viewed. Entitled Vergangenheit (meaning the past in German), it focused on Edward VIII (played by Alex Jennings) and his questionable links to the Nazis and Adolf Hitler.

One last prediction for 2018: Hollywood’s monopoly on cinematic entertainment essentially died in 2017, and we will be treated to more and better movies from independent outlets in the upcoming year. The stink coming from Hollywood in 2018 will be from the decomposition from its rotting corpse.

“Perhaps it is because I am an amateur Egyptologist, and ancient Egypt’s culture and history is subject to the most egregious levels of bastardization….”

I do expect some Hollywood award nominations for this film, but no wins because male patriarchy conservative froth foam evil!

but… but… “Land of the Pharaohs” with Joan Collins was historically accurate, wasn’t it? Tell me it was!!!

I suspected that the dilemma between negotiating with Hitler and war, which was a key plot device, was inaccurate.

Well … one doesn’t have to be an expert to see that this would ruin the movie for anyone who knew something about 1940. At that time, Winston Spencer-Churchill was the only man on the entire planet who was both in a position to oppose the National Socialist scourge, and was determined to do so.

One could very plausibly argue that this is the central fact of 20th century history—one of those few genuine crises in which the world could have gone one way, or another, with each path being unrecognisably different from the other.

Others in positions of responsibility, like Anthony Eden, recognized the menace, but were not so determined to fight, no matter what. And that wasn’t good enough.

This is fundamental, and not something which can be ignored. It’s as ridiculous as claiming that, say, Samuel Adams was a British spy. It’s not dramatic effect, it’s theater of the absurd.

Reviewers also balked at a scene set on the subway. Which is a bizarre thing to have fabricaded; Churchill was notorious for never even having ridden on a bus. Putting him on a subway is just clown-car stuff. This is not a bit of trivia; it’s in the “every English schoolboy knows” category.

If you like the movie, you’ll appreciate Winston’s early autobiography, A Roving Commission, which concludes with his marriage. His grandaughter’s book about his escape from a Boer POW camp, Churchill Wanted Dead or Alive, is interesting too, although much of its material comes from A Roving Commission.

I saw the movie, Leslie, and really enjoyed it. I am no history buff and found that this framed the Dunkirk movie well, which I also enjoyed.

A couple of reviews on Nat’l Review also stated that the movie failed historically by showing Churchill equivocating on standing firm vs pursuing peace talks. But the writers of Darkest Hour claim they are following recently discovered notes from the inner council of Parliament, and that the movie is based on that.

So I agree: enjoy the movie and wait for the historians to debate the historicity of said notes.

Echo what you just said. During the last election I was trying to convince to Mormons to vote for the imperfect immoral man.

“Churchill was an alcoholic and a chauvinist. Without him Western Civilization would have fallen”

Mormon: “There was no one else? LOL Churchill was the only person in the entire world capable of stopping Hitler??”

As someone who could pass as a serious amateur Churchill student, I found the movie one of the best I have seen. There were some odd lapses, such as Halifax being described as the son of a duke rather than a viscount, and quoting something which would be said by Murrow 14 years later. The ride in the tube was pure fiction, but many of the bits of conversation were things which Churchill said at other times. Dare I say fake, but accurate?

However, it accurately captured many things, such as Churchill’s failure to grasp the reality of Blitzkrieg warfare, still thinking in terms of WW I mobility. He was of course not alone in that. It also showed that he was no hand wringing civil servant, being able to make the hard decisions such as sacrificing the Calais garrison to buy a bit of time. He has seen war up close and person many times, including WW I, so he knew what he was ordering. There were many other “Easter eggs” which went by too quickly for most.

As others have remarked, this was an effort to make Churchill a more personal, real character, rather than the abstract historical personage. It did so rather well, though they did overplay his age early on. He was an incredibly robust 66, especially for the time, and had a nearly photographic memory.

All the bits came together brilliantly at the end. One man did swing his country, and eventually much of the world, in a direction it would not have taken otherwise.

As a Churchill junkie, I would both: recommend seeing Darkest Hour in the theater (when those very rare worthwhile movies appear, such as DH and American Sniper, we should send Hollywood a message by supporting those movies). As well, “The Gathering Storm” and “Into the Storm” are both excellent portrayals of Winston Churchill during the 1930’s – 1940’s (available for streaming on Amazon and perhaps elsewhere as well).

I will follow-up by trying to see those films. And, a great point about giving Hollywood positive reinforcement when they do something right…which is rare.

I found the movie extremely enjoyable, and with all the same observations noted above.

On another topic that you mentioned, Egyptology, there is a very good documentary on revisiting the timelines for the Exodus. Check out Timothy Mahoney’s “Patterns of Evidence”:
http://patternsofevidence.com

I second Grrr8 American. I found “The Gathering Storm” and “Into the Storm” more compelling portraits of the great man with the actors portraying him, Albert Finney and Brendon Gleeson, every bit as good as Gary Oldman

The scene of him coming out of the bath reminded me of a story that I think I read in one of his biographies (Manchester’s?). Churchill was at the White House taking a bath, when FDR entered the room. Churchill rose and FDR apologized, feeling the awkwardness of the moment.

Churchill stated “The Prime Minister of England has nothing to hide from the President of the United States!”

It might be apocryphal, but I believe his biographers have noted other occasions of his abruptly walking around after a bath

I meant to ask the Churchill expert thoughts on Manchester’s The Last Lion. Volume 2 is my favorite, but I admit it’s the only Churchill book I’ve read

This was an excellent movie. 4 or 5 stars would be accurate. Oldman’s portrayal likely carried it to 5 for folks teetering on the line. I also came away detesting Chamberlain even more than before. As to the accuracy or inaccuracy of his portrayal, I don’t know, but I muttered “Coward” at Chamberlain’s last act of the movie.