“The blood in our veins is a gift to our leader (Khamenei).” 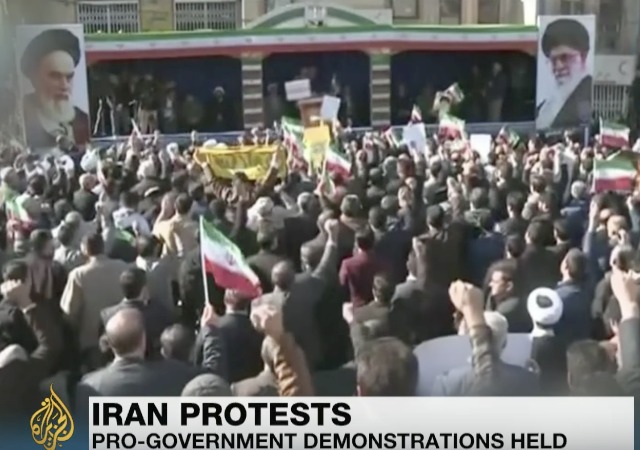 Iran has seen six days of protests filled with people sick of the oppressive regime and demanding change.

Not to be outdone, the regime staged pro-government rallies while Iran’s Revolutionary Guards declared the uprisings have ended.

At first the regime seemed to brush aside the protests, blaming them on foreign agents and infiltrators. That seemed to change as the protests grew and the regime arranged pro-government protests to counter the others. From Reuters:

State television broadcast live footage of rallies in cities across the country, where marchers waved Iranian flags and portraits of Khamenei, Iran’s paramount leader since 1989.

Pro-government marchers chanted, “The blood in our veins is a gift to our leader (Khamenei),” and, “We will not leave our leader alone.” They accused the United States, Israel and Britain of inciting protests, shouting, “The seditionist rioters should be executed!”

Pro- regime rally today in Qom!
Spot the non-cleric amongst them!
#IranProtests pic.twitter.com/ov6TLDIJih

Attempts to End the Protests

In comments to the semi-official Fars news agency, Mohammad Ali Jafari claimed that only 15,000 people had turned out at the height of the rallies and that the main “troublemakers” had since been arrested.

“With the help of God, their defeat is definite,” Jafari said. He gave no evidence of how the movement had been defeated beyond the arrests and his comments are being taken as a warning against more rallies.

It’s hard to verify anything since the regime demanded that state media not cover the protests, which meant that info we received in the West came mostly from social media. That didn’t help much, though, since officials did all they could to block the internet.

Los Angeles Times correspondent Ramin Mostaghim said fewer people protested in the last few days, “but they continued Tuesday night in at least 10 cities.” The authorities arrested 450 people and 21 died in the protests.

Officials even arrested a European citizen and claimed this person “had been trained by espionage organizations in Europe.”

This person allegedly “‘led rioters’ in the town of Borujerd,” according to Hamid Reza Bolhassani, a judicial official in Lorestan.

The peak of the protests saw people gathering in as many as 80 cities, but Tehran mostly remain silent. One person told The New York Times he wanted to protest in the capital, but only found a lot of police.

HorrificFootage: Run over people by car and Shooting them by gun. Welcome to the #Ahvaz in the southwest of #Iran
The 6th day of anti GOV protest, Wali Faqih dictatorship and mullahs corrupt regime.
Jan,02,2018#IranianProtests#IranProtests pic.twitter.com/eCVecy4RV4

Protests have ended! But missing persons and executions are up by 500% I bet.

But Iranian Mullahs are like the MSM – always lying……

And this one…this time…probably is over.

But the issues remain.

This is about as big a joke as a hillary klinton booksigning.

(Each attendee has been promised a CD of old obama speeches.)

When the public hanging parties begin, we will know which side has prevailed.

Actually, we didn’t see much. Was there more? Rallies and protests are not the stuff of which revolutions are made.

An internal attack on a country’s economy is one of the definite signs that something revolutionary is actually happening. In France (and, since 1848, much of the rest of Europe), barricades are the way to bring a country to a standstill. Urban centers can be choked to immobility almost immediately when nothing can move on the streets; and in more rural economies, the agrarian hinterland can essentially blockade cities.

Germany after World War 1 was paralyzed several times by huge strikes. Again, transportation was the obvious target; railroads, streetcars, drawbridges, docks & harbors, taxis all stopped working when their operators simply didn’t show up for work. But these strikes went further, immobilizing mills, factories, post offices, etc. Nothing was actually destroyed; there was negligible rioting, looting or arson, and so nothing much to photograph … merely a great deal of normal activity which simply wasn’t happening. There were also some local revolutions which declared socialist city governments of one stripe or another, and those made for definite news, but they also made good targets and were easily overwhelmed by either the regular army or by the Freikorps. Perhaps because they made poor targets, the strikes were generally more effective.

Unfortunately these things usually work best for the Communists, as this level of “community organization” is pretty much all they can manage to do right.

Basiji and university students told they would be expelled.

Having to send out the Guard against the protesters is a promising sign that the regime is in real trouble, but unless an outside country intervenes (extremely unlikely since Democrats would never allow Trump to compromise the legacy of the Annointed One) the only hope the Iranians have is if the military is willing to go against the Guard.

I’m not sure how likely that is, but their unwillingness to put down the protests themselves gives some cause for hope.

There are many other “outside forces” that would like to see the end of Iran.

Gee I wonder which rallies the media will cover in greater detail?