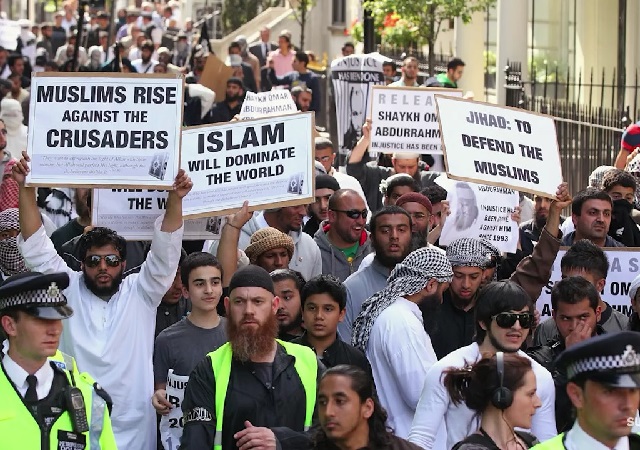 With the Islamic State (ISIS) heading for collapse, Belgium is bracing for the return of hundreds of jihadi fighters deserting the ranks of the Islamic Caliphate in Syria and Iraq. The western European country, which pursued a liberal immigration policy in recent decades, produced the highest number of foreign ISIS fighters per capita of EU countries — up to 700 in total.

More than 100 foreign fighters have returned to the country so far and more as expected to arrive, largely thanks to Trump administration’s “annihilation” strategy against the Islamist group.

Belgium’s capital Brussels, which also serves as the de-facto capital of the European Union, has emerged as a major center of Islamist activity in Europe. The Muslim-dominated Molenbeek district of Brussels has been described by the media as the “Europe’s crucible of terror” and a “no-go-zone” even for the Belgian police.  The district, nicknamed ‘Little Morocco’, first grabbed international headlines after the November 2015 Islamist attacks on Paris. Two of the gunmen involved in the French attack came from this suburban district. The following year Brussels itself was hit by a series of bomb attacks that killed 32 people and injured more than 300. The jihadi terrorists involved in those attacks came from the Molenbeek district as well.

With hundreds of battle-hardened Islamic State terrorists returning to the country, Belgium faces the biggest national crisis since the end of the Second World War. German public broadcaster Deutsche Welle reported the situation in Belgium developing :

More than 100 foreign fighters have returned to Belgium, with more to follow. Some want to leave their past behind, others want to “disappear” and pose a headache for the authorities.

European governments have been warned for years to be prepared for some dreaded homecomings — radicalized citizens returning from “Islamic State” (IS) war zones. As the global coalition retakes territory that IS once claimed as its “caliphate,” some fighters who hold European passports are expected to make full use of them.

Belgium is the European country with the highest per capita number of so-called foreign terrorist fighters and the prospect of weapons-trained, ideologically hostile individuals showing up back in their old neighborhoods makes everyone nervous. Earlier returnees trying to start anew refuse to discuss their reintegration. (…)

Local officials are being forced to manage this situation largely on their own due to a lack of federal initiatives.

Germany, France, and the UK, with a large number of ISIS fighters returning home, face a similar dilemma.

The German government is actively seeking the return of ‘ISIS-brides’ and their children, citing “humanitarian considerations and Germany’s duty to protect its citizens.” Many of these women may have participated in acts of terror and their children have undergone indoctrination by ISIS instructors.

Germany’s Foreign Ministry has intensified its diplomatic efforts to bring back the wives and children of ISIS fighters despite repeated warnings by country’s intelligence agencies.

“We see the danger of children who socialized with and were indoctrinated by jihadists returning to Germany from the war zones,” the chief of Germany’s domestic intelligence agency BfV, Hans-Georg Maassen, warned last October. “This could allow a new generation of jihadists to be raised here.”

Germany isn’t the only European country welcoming back Islamic State fighters — or war criminals, to be precise.

The British government is offering taxpayer-funded housing and other economic and welfare benefits to the returning ISIS terrorists. “The plans — code-named Operation Constrain — could see returning ISIS fanatics jump to the top of council house waiting lists and offered counseling,” British daily The Sun reported in October. The plan also offers provision for psychological counseling for ‘traumatized’ jihadis.

The wartime British Prime Minister Winston Churchill, who declared “no peace till victory, no pact with unrepentant wrong” as he unleashed the ‘Operation Overlord’ on the Nazis in the Normandy, would be turning in his grave over Theresa May’s ‘Operation Constrain’ designed to cajole the returning war criminals.

Not willing to be outdone, the Scandinavian country of Denmark is running its hilarious “Hug a Jihadi” program. Yes, that’s the official name of the program. The Danish police running the program believe that “helping young extremists is the best way to keep the peace” and “[t]reating them harshly” or “with suspicion” will make “them more of a danger to society.”

According to the EU counter-terrorism coordinator Gilles de Kerchove, out of 5,000 jihadis who left Europe to join ISIS around 1,500 are now back home. Nearly 1,000 ISIS terrorists holding European nationalities have reportedly been killed in Syria and Iraq. Those who manage to survive the Islamic State’s military collapse will be heading home to Europe.

Regardless of what European policy planners think, they are not coming back to get ‘hugged’ or seek anti-aggression therapy. ISIS returnees and many of their fanatic sympathizers in Europe want to obliterate the Western civilization — even if it’s the last thing they ever do.

Maybe they can get temporary housing in one of the dozens of EU administrative buildings.

I’m pretty sure they’re not viewing it as a temporary arrangement.

There are thousands of perfectly good and currently under-utilized housing units in Germany that the returning ISIS fighters could use, located in quaint hamlets such as Auschwitz and Dachau.

Lay down with dogs, wake up with fleas.

And capital of the EU, the most bureaucratic controlling structure in the Europe.

Too bad the world is insane. In the old days I would have thought this was like that old trick where criminals with arrest warrants were notified they won a sweepstakes or big screen and told they needed to bring ID to pick it up.

“Germany’s Foreign Ministry has intensified its diplomatic efforts to bring back the wives and children of ISIS fighters despite repeated warnings by country’s intelligence agencies.”

Hmmm. The department responsible for foreign relations ignoring warnings of the department’s actions being a danger to the country’s security. Where have I heard about that before?

Always victims, the Muslims. What lying frauds they are.

“Muslims rise against the Crusaders.”

The Crusaders went to protect the Holy Land from the deprivations of the Muslim invaders. Mohammedanism, you know, the religion with bloody borders.

Canada is having the same conundrum concerning returning ISIS fighters. Unfortunately Justin Trudeau’s reaction is : “What, me worry?”

It’s all my fault. If only I was nicer, he would love me.

Just kill them when they re-enter. I don’t see what the problem is here.

Europe has chosen suicide. They are determined. They cannot be stopped. Let them.

European leaders need to wake up to the fact that when you play stupid games, you win stupid prizes.