Goodbye Pussyhats? May Hurt Feelings of Transgender People and Women of Color

Goodbye Pussyhats? May Hurt Feelings of Transgender People and Women of Color 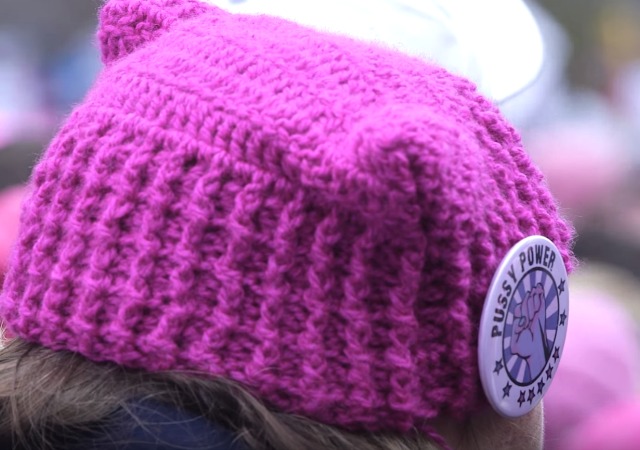 It’s ALWAYS about the feelz. Feminists may throw away their infamous pink pussyhats because it may hurt the feelings of transgender folks. From Detroit Free Press (emphasis mine):

The Women’s March is back in 2018 with its Power to the Polls anniversary protests on the weekend of Jan. 20-21. The focus during this Women’s March reboot is to register more women to vote, and to elect women and progressive candidates to public office.

But this time when marchers take to the streets in cities from Lansing to Las Vegas, there could be fewer pink pussyhats in the crowds.

The reason: The sentiment that the pink pussyhat excludes and is offensive to transgender women and gender nonbinary people who don’t have typical female genitalia and to women of color because their genitals are more likely to be brown than pink.

“I personally won’t wear one because if it hurts even a few people’s feelings, then I don’t feel like it’s unifying,” said Phoebe Hopps, founder and president of Women’s March Michigan and organizer of anniversary marches Jan. 21 in Lansing and Marquette.

“I care more about mobilizing people to the polls than wearing one hat one day of the year.”

The state and national organizations, she said, have tried “to move away from the pussyhats for several months now, and are not making it the cornerstone of our messaging because … there’s a few things wrong with the message.

“It doesn’t sit well with a group of people that feel that the pink pussyhats are either vulgar or they are upset that they might not include trans women or nonbinary women or maybe women whose (genitals) are not pink.”

So yeah. Not because it’s vulgar and disgusting, but because of FEELZ.

Of course, to the real perpetrators of sexual assault ..

B.S.
It’s been a year now and reality starts to sink in.
They can now look at themselves wearing those ridiculous hats and vagina costumes and finally realize what an absurd, counter-productive idea that was.
You can expect them to start deleting their pictures from social media and in the long term the “pussy hat” and the “vagina costume” will be deemed politically incorrect and removed from everywhere.
It’s up to us to keep records and bring it up, laugh at them from time to time.

No need to archive anything. The Left will always devise something new and asinine for our ongoing entertainment.

I will be wearing my pink hat. I will not let anyone tell me what I can, or can not, wear. That’s how we got into this mess in the first place.

I don’t know what your policy is about linking to other commentary, but this is really worth a go. Especially the comments. It makes this social justice cause completely laughable.

Please go to Ace of Spades – ace.mu.nu and look up “Pensacola Women’s March Bans Pink Pussy Hats Because… See, Some Women Don’t Have Pink Pussies. They Have Penises.”

Read the whole thing, and then the comments.

Thanks, and if I have contravened any rules, please let me know.

After buying my pink pussyhat and wearing it proudly, I asked myself “Does my pink pussyhat accurately represent my vagina?” I don’t know about the the girls with purple hats but I now have a cappuccino colored hat with a pink inner liner. Does the article suggest girls wear hats that match themselves or are they a bunch of prudes???

It’d be more appropriate, wouldn’t it?

wow… the left are really eating their own. so to speak.

At this rate, they’ll never get off the couch.

Just how fast is the Left lurching further Left?

Just measure the time it takes a position they hold, as a litmus test, that you must zealously support, to become “offensive” in some way.

Trump was inaugurated on Jan 20th of last year. These hats didn’t even make it a year.

Can’t trans make their own hats?

Hurts “women of color” because it’s NOT all pink on the OUTSIDE?

WTF? How monumentally retarded can the left become?

Pink hat…white privilege!
Are they suggesting, by saying no one should wear a pink hat going forward, that “WOC” are incapable of knitting their own hat with their own color preference?
How racist. How bigoted. How prejudicial.

When are they going to start wearing ‘ass’ hats?

It’d be more appropriate, and they’d never have to change the hat motifs again.