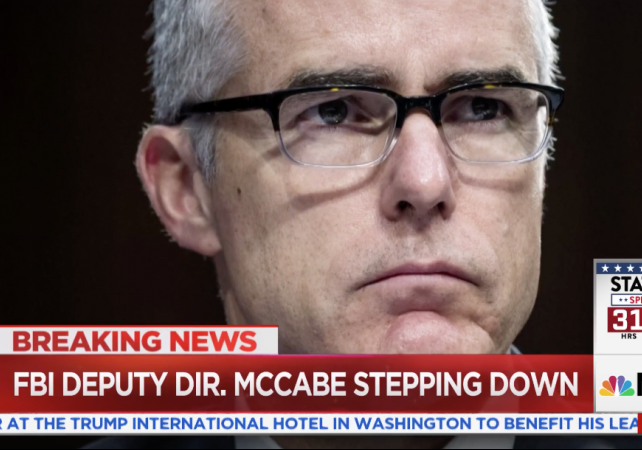 According to an expanded report by Fox News, McCabe was allegedly involved in one too many controversies, ultimately leading to early retirement.

Most notably, McCabe was reportedly mentioned in the surveillance memo House GOPers are hoping to make public.

Tuesday, FBI Director Chris Wray sent a message to all FBI employees making clear McCabe’s early retirement was the direct result of a yet-to-be-published report by the Inspector General’s Office.

“Wray alluded to having seen aspects of the IG’s report into the way the FBI handled the investigation into Hillary Clinton’s use of a private e-mail server,” reported NBC News.

“It would be inappropriate for me to comment on specific aspects of the IG’s review right now,” Wray said in the message. “But I can assure you that I remain staunchly committed to doing this job, in every respect, ‘by the book.’ I will not be swayed by political or other pressure in my decision making.”

In the very next paragraph, Wray explained that McCabe had submitted his intention to retire, suggesting a connection between the findings of the IG report and McCabe’s decision.

Several sources familiar with McCabe’s move said the he made his decision as a result of a meeting with Wray in which the Inspector General’s investigation was discussed.

News that McCabe would leave his role seven weeks before he was expected to retire triggered speculation on Monday that he was being forced to leave under political pressure from President Donald Trump. But several FBI insiders said that was not the case.

I don’t really care about the nuances of his retirement. What I want to know is, is there or will there be a grand jury hearing details of what he’s done?

Or more likely, would there be one in a more honest place (i.e. not Washington)?

“…would there be one in a more honest place…” Absolutely, with St. Peter as Judge and Jury. I won’t bet on anything sooner.

He should be fired,stripped of retirement,charged and tried and the cookie crumbs land where they may.