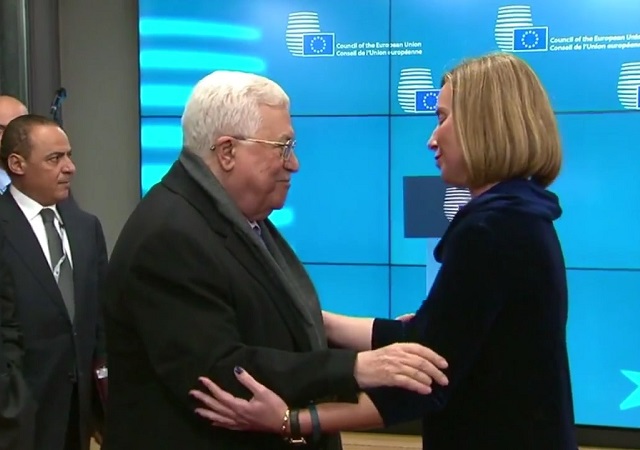 With the oil-rich Arab states too distracted with their feuds and infighting to champion the ‘Palestinian cause’, and the Trump administration turning up the heat with its Jerusalem move and cuts to Palestinians aid, the Palestinian Authority President Mahmoud Abbas has launched a diplomatic offensive to secure the EU backing.

Abbas met with the EU Foreign Minister Frederica Mogherini in Brussels on Monday and urged the European countries to recognize the Palestinian statehood. Mogherini, who began her political career with the youth wing of the Italian communist party, was highly receptive to Abbas’ overtures but failed to make any commitments to the visiting Arab leader. Given the current divisions within the EU, Mogherini doesn’t have much of a leverage on this point.

She, however, reiterated the EU position, extending her support for a two-state solution. “I want to reassure President Abbas of the firm commitment of the European Union to the two-state solution with Jerusalem as the shared capital of the two states,” Mogherini told the visiting PA chief.

EU recognition of Palestinian ‘statehood’ is “unlikely to happen in the near future,” commented the German public broadcaster Deutsche Welle.

Abbas puts the Europeans in an ’embarrassing situation’ reported the German public broadcaster Bayerischer Rundfunk. The PA demand exposes the rift within the EU, the broadcaster added:

Standing next to the Foreign Policy-chief Frederica Mogherini, Palestinian President stated his wish before the running cameras: “We see the European Union and the Foreign Policy-chief Frederica Mogherini as true partners and friends. Therefore we call upon the member states to recognize the “State of Palestine” without any delay”.

The Palestinian guest brought his European hosts in somewhat of an embarrassing situation: he thereby exposed how divided the EU is on this issue.  (…) For majority of the EU countries — also for the [German] Federal government — this topic is absolutely not on the agenda. [Translation by the author]

Out of 28 EU member states, nine EU countries, including Sweden and some eastern European countries, have recognized the ‘Palestinian State’. EU member Slovenia is considering a similar step and has set up a parliamentary committee to look into the matter. The EU official position is to refrain from such recognition till a final peace agreement is reached between the State of Israel and the Palestinians.

France was most supportive of the demands made by Abbas.

While the German Chancellor Angela Merkel is busy negotiating a coalition with the left-wing Social Democrats to secure her fourth term, France wants to be seen as the dominant force within the EU. French Foreign Minister Jean-Yves Le Drian called upon the EU to start negotiations on an Association Agreement to upgrade political and commercial ties with the PA.

“Concerning relations between the European Union and Palestine, we want to move from an interim agreement to an Association Agreement and immediately engage a process in that direction,” Le Drian said on Monday.

EU should open talks on the association pact with Abbas as an “interim accord” ahead of its future statehood, the European news website EU Observer reported quoting the French Foreign Minister.

When a picture speaks a thousand words.

This photo of @FedericaMog embracing #Abbas is Brussels today pretty much sums up the #EU love affair with the #Palestinians!

A love blind to reality, Palestinian intransigence or terror. pic.twitter.com/Wh0JEHbNZv

With the U.S. withholding millions in aid to the Palestinians agencies — including UNRWA, the notorious UN body that perpetuates Arab “refugee” status, first created after the Arab invasion of 1948 — Abbas is looking to the Europeans to foot the bill. Abbas, who is in the 12th year of his 4-year-term, also needs hundreds of millions of dollars in foreign ‘aid’ each year to secure the loyalty of his henchmen and armed militia.

The Palestinian Authority, created following the Oslo Accord of 1993, has failed to create any viable economy in the territories it holds. It was turned into a kleptocracy by the arch-terrorist Yasser Arafat and inherited by his Soviet-trained protege Abbas.

“I want to reassure Palestinians and President Abbas of our continued support, including financial,” Mogherini said on Monday. “The EU and its member states are collectively by far the largest donor, the largest supporter for the Palestinians. And our support will continue, including to UNRWA.”

The U.S. and the EU were on a confrontational course and ‘staging a long-distance duel” over Arab-Israeli conflict, commented the German current affairs magazine Der Spiegel. “US Vice President Pence plays up to the Israeli government in Jerusalem, Europeans give a platform to Palestinian President Abbas. The discord sits deep.”

Despite German weekly’s resentful tone, the contrast between the U.S. and the EU couldn’t have been sharper. While Vice President Pence visits a trusted U.S. ally and addresses the Israeli Knesset with a speech steeped in biblical references, the EU top brass embraces the PA-chief Abbas, an unrepentant terrorist, and anti-semite. These divergent affinities are, however, very natural. While the U.S. and Israel are true democracies based on Judeo-Christian values, the EU and the PA are run by unelected apparatchiks and power-grabbers deceiving the very people they purport to represent.

Mogherini loves the big talk, but the EU doesn’t have money to throw around on vanity projects like the Pali’s.

Oh trust me! When it comes to anything bad for Jews and Israel, Europe always finds the money! Europeans would gladly starve themselves if it meant the end of Israel!

And while I wish it were true that the
“Divided EU Won’t Back Abbas on Palestinian ‘Statehood’” it isn’t. I promise you, the EU will absolutely back, promote and encourage a Palestinian state as well as the destruction of Israel.

notamemberofanyorganizedpolicital in reply to caliroxanne. | January 24, 2018 at 9:31 pm

Why does Foreign Minister Frederica Mogherini look exactly like
a middle-aged Hillary Clinton?

Does she take Clinton Pills or sumthin’??????

Yep. Abbas is in a dangerous, perhaps life threatening position if he can’t pay his “soldiers”.

Nice to have a program and sports card to tell the players apart every once in awhile. I’ll thank Abbas just this once for that. Fix your sh*thole first and then maybe you will get some respectability beyond the EU or UN. I am not holding my breath. 🙂

I feel very sorry for the Palestinian people in the same way I feel sorry for the Mexican people. They are pawns in a thug power play where terror reigns. I suspect most of them wish for a sane solution but don’t speak up out of fear and I also suspect that the agitation we see from “the Palestinian people” is similar to the agitation of Antifa here in the US, bought and paid for.

What a sad story, with no end in sight. I’m glad to see Trump withdrawing funds that sustain this thugocracy.

Maybe – a big MAYBE DJT will help the arabs of MENA come to some consonances on this issue.

Our Prez has the gift of gab and carries a big stick.
the only way that the Arabs who occupy Israeli territory can have a normal life is to stop attacking Jews, who in the main,
would let them live a free life – ain’t gonna happen.
from the time of grand mufti trained and joined NAZI Germany to
the present time the hate and propaganda by the arabs has not stopped.
the ON:Y reason that Egypt and Jordan have peace agreements with Israel is that they were soundly defeated and realized that war was a no winner. the arabs of the west bank have not yet been given the opportunity to lose and thus have delusions of grandeur – exemplified by having a ‘leader’ who is in his 12th year of a 4 year term LOL.

The only thing I disagree with is that the Islamic Jew hatred began long before the grand mufti and nazis; it goes as far back as Muhammad.